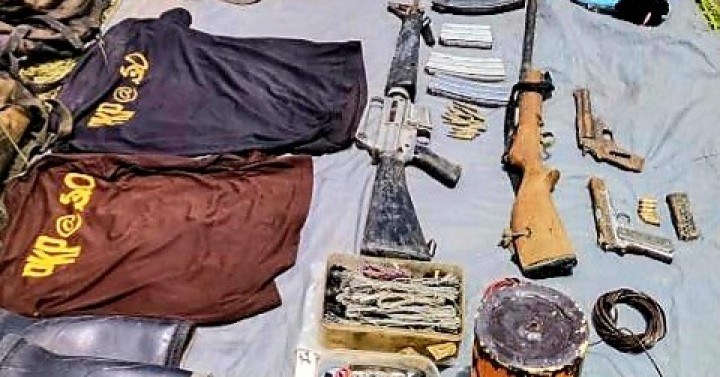 ILLEGAL ITEMS. Troops of the 15th Infantry Battalion of the Philippine Army confiscated various firearms and ammunition after their clash with communist terrorists on Saturday (April 24, 2021) in Ilog, Negros Occidental. Two rebels were killed during the 40-minute encounter in Sitio Payranan. (Courtesy photo of 15IB)

BACOLOD CITY – Two militants from the Communist Party of the Philippines-New People’s Army (CPP-NPA) were killed in an armed clash with troops of the 15th Infantry Battalion of the Philippine Army (15IB) in Barangay Pinggot, Ilog city in Negros Occidental.

The 15IB reported Monday that the bodies were being taken to a funeral home in Barangay Hilamonan in the neighboring town of Kabankalan.

There were no casualties among government forces during the 40-minute gun battle with members of the Southwest Front of the NPA in Komiteng Rehiyon-Negros, Cebu, Bohol and Siquijor in Sitio Payranan.

Colonel Leonardo Peña, commander of the 302nd Infantry Brigade overseeing the 15IB in South Negros, praised the tireless efforts of the troops in their series of skirmishes with the communist terrorists.

He also recognized the community’s involvement in providing accurate and timely information to soldiers, evidence that locals are fed up with the “falsehoods” of the CPP-NPA.

“We must keep the peace we are enjoying now, and not lose our grip, so that the next generation can enjoy it without fear of being deceived,” added Peña.

Colonel Erwin Cariño, commander of the 15IB based in Barangay Tiling, Cauayan, said the continued support of the population in providing information on the activities and location of communist terrorists had been instrumental in their efforts to end the local uprising on Negros Island contributed.

“We urge the remaining NPA to surrender while they still have time,” he added.

Government troops recovered a Colt AR15 M-16 rifle, a .45 caliber pistol, a self-made 12-gauge shotgun, an anti-personnel mine with a detonator and detonator, three short magazines, various live ammunition and subversive documents from the killed rebels . and five backpacks.

The Ilog encounter took place a week after the clash between CPP-NPA rebels and 15IB soldiers in Purok Yuring, Sitio Dash 7, Barangay Bulwangan, in which two communist terrorists were also killed.

The CPP-NPA is listed as a terrorist organization by the United States, the European Union, the United Kingdom, Australia, Canada, New Zealand, and the Philippines. (PNA)