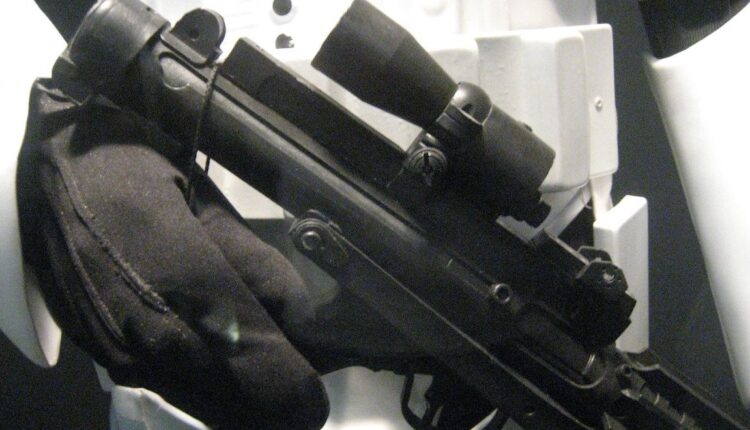 Despite the establishment of the United States Space Force, we are still a long way from building blasters like in the Star Wars universe and defeating our enemies with intense plasma energy. That’s right, they’re not lasers. In the Star Wars universe, ranged weapons are mainly powered by a high-energy gas that is converted into a glowing particle beam. Many of the blasters used in a galaxy far, far away are a far cry from real firearms that are more familiar to us.

With a very tight budget of $ 11 million, or just under $ 50 million adjusted for inflation, George Lucas and his film crew decided to modify excess weapons from real life rather than building futuristic weapons from scratch develop. Weapons and props supplier Bapty & Co was hired to equip Star Wars with modified surplus firearms to serve as space-age blasters. However, due to the budget mentioned above, many of the props could only be rented for the film. As a result, the modifications were easy and we can easily identify the basic weapons today.

The magazine on the left, the large breastplate, and limited arm movement in their armor forced Stormtrooper actors to hold their E-11s left-handed (Lucasfilm Ltd.)

The standard weapon of the Imperial Stormtroopers, the E-11 was a light, handy, and deadly blaster. Aside from the debate over Stormtrooper’s accuracy, the blaster was very effective on the battlefield, and even had three power settings: lethal, numbing and stabbing. It was also fitted with a telescopic sight and a three-position collapsible stock, a carryover of the real weapon on which it is based. British soldiers from 2 PARA armed with sterlings (Department of Defense)

The Sterling L2A3 submachine gun is a British firearm that was developed at the end of World War II to replace the famous Sten submachine gun. The Sterling that fired the 9x19mm Parabellum round was a special forces favorite because of its excellent reliability and accuracy. In the Star Wars conversions, a stripped-down version of Sterling’s Stick magazine was used as a power cell.

The Rebel Alliance’s favorite small arm, the BlasTech A280, was highly effective at piercing armor and outperforming other standard infantry blasters at long range. There were two variants of the A280. The A280C was the weapon of choice for the rebel commandos. The A280-CFE (Covert Field Edition) was a modular weapon system that could be converted from its heavy core pistol to an assault rifle or sniper rifle.

The A280 standard is an amalgamation of an AR-15 receiver with a cut-off magazine and the front of a German StG 44, also with a cut-off magazine. Original StG 44s are extremely rare and expensive, so the ones cut apart to make the A280 were rubber supports previously used by Bapty Co. The A280C is largely based on the StG 44; The only notable changes were the change in inventory, the removal of the magazine, and the addition of a scope and handguard. The A280-CFE is more similar to the base A280 and has an AR-15 as a heavy core pistol. The conversions of the assault rifle and sniper rifle are equipped with the front end of the StG 44.

Considered one of the most powerful blaster pistols in the galaxy, the DL-44 inflicts massive melee damage at the expense of rapid overheating under sustained fire. There is also a carabiner variant with an extended barrel and an attachable shaft. This version was used by Tobias Beckett on Mimban before deconstructing it and giving it to Han Solo. Solo further modified the weapon to make his iconic sidearm. After all: “Hokey religions and old weapons are no match for a good blaster by your side.” The Waffen SS soldier on the right shoulders of an M712, an automatic variant of the C96 (Federal Archives)

The DL-44 is modified compared to the Mauser C96 pistol and can be easily recognized by its rectangular inner magazine and the broomstick handle. Originally made in Germany from 1896, unlicensed specimens were also made in Spain and China in the first half of the 20th century. With the popularity of Han Solo’s DL-44, Star Wars enthusiasts have been known to purchase and modify rarer original C96s to make replicas, much to the horror of gun collectors.

Although the defender is small, he could still knock down an Imperial soldier (Lucasfilm Ltd.).

On the other end of the spectrum, the Defender blaster pistol was a low powered weapon intended for civil defense and small game hunting. It was also popular with the nobles of the Star Wars universe who used it in duels of honor. The weapon was the weapon of choice for Princess Leia Organa, which she used against Imperial stormtroopers when boarding the Tantive IV and attacking the Endor shield generator bunker.

The Defender is based on the Margolin or MCM training pistol. Manufactured by the Soviet Union, the .22lr pistol is mainly used for shooting competition targets in the 25 meter standard pistol class. The gun was chosen because of its small size to keep the propeller gun from looking bulky and unwieldy in Carrie Fischer’s hands while filming. Death Troops used vocal scramblers that could only be understood by other Death Troops (Lucasfilm Ltd.)

The DLT-19 was used heavily by Imperial forces as well as bounty hunters and even some heavy rebel soldiers. While not a crew-operated weapon, its high rate of fire meant it could suppress and knock down enemies from a great distance. The DLT-19D variant with a telescopic sight and a glow stick (flashlight) under the barrel was used by the Imperial elite death troops. The DLT-19x targeting blaster was another variant. It had a rifle scope with a larger magnification than the D variant and released all its power in one fell swoop, making it an extremely precise and deadly precision weapon with a long range.

Very little was changed on the MG 34 to get into the DLT-19. The German machine gun introduced in 1934 could be belt fed or use a drum magazine. Neither was used on the DLT-19. The MG 34 was developed according to the new concept of a universal machine gun and is widely considered to be the first general-purpose machine gun in the world. It was the mainstay of German support weapons until it was replaced by the MG 42 in 1942. Even then, because the MG 34 barrel was more easily interchangeable within a vehicle than the MG 42, it remained the primary defense weapon for armored vehicles throughout the war. You can never have too much suppressive fire (Lucasfilm Ltd.)

If you couldn’t tell, nationalizing the BlasTech industry meant it was the leading military-grade weapons manufacturer in the galaxy. The T-21, however, was rarer than their more common E-11 or A280 blasters. It was issued to more elite units such as Stormtroopers, Magma Soldiers, and Shadow Soldiers. However, the high rate of fire and long range accuracy were limited by the power of only 30 shots. To remedy this limitation, the T-21 could be plugged into a power generator to create a sustained fire. The T-21B variant added optics to increase long-range lethality. The Lewis light machine gun was designed in America but built in Great Britain and used by the British Empire during World War I. It had a distinctive running cooling housing and a pan magazine mounted on top. Like the magazine of the MG 34, the magazine of the Lewis cannon was omitted for use in the Star Wars universe. It was often used as an aircraft machine gun and served until the end of the Korean War.

Moving Beyond the Un-Democratic Demagoguery