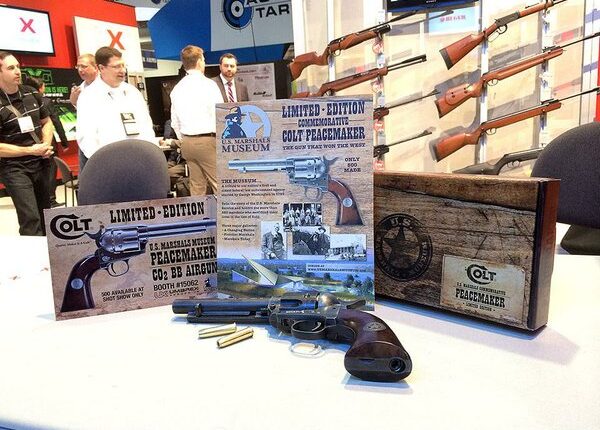 Air-gun maker at show in Vegas

When it came time to decide when and where air rifle maker Umarex USA would release a collector’s edition of one of its pistols, the choice was clear – this had to be done during the Las Vegas Shooting, Hunting and Outdoor Show.

The event, commonly referred to as the SHOT Show, is a must-see for anyone in the industry. It started on Tuesday and will last until Friday. The number of visitors is expected to be around 70,000.

In 2013, arms sales by the country’s largest arms manufacturers spiked after more regulations were required after multiple mass shootings, leading to panic buying and nationwide shortages of some firearms and ammunition. Since then, demand has cooled and the market has calmed down, with some retailers sitting on excess inventory.

The SHOT Show is an annual event sponsored by the National Shooting Sports Foundation, a trade association for the firearms, ammunition, shooting, and hunting industries. This is the 37th year of the fair and 1,600 exhibitors are expected.

Umarex from Fort Smith is one of these exhibitors and is offering 15 new air rifles at its stand, including a Colt Single Action Army Revolver in a limited edition with BB shot. The pistol features the US Marshals Service emblem in the handle and is numbered from one to 500.

All limited-edition pistols were spoken for in less than four hours, said Richard Turner, vice president of sales and marketing at Umarex. “It was phenomenal,” he said.

Umarex was taking pre-orders for the guns, limiting orders from a minimum of three to a maximum of 30. The guns are expected to retail for $ 179 to $ 199. A percentage of the proceeds will go to the US Marshals Museum in Fort Smith, which is expected to open in 2017.

Last year Umarex offered a similar collector’s version of the Colt 1911 pistol, which also sold out on day one, Tuner said, but not nearly as fast as the Colt Army.

The SHOT Show is also a location for recruiting firearms companies to begin operations in Arkansas or relocate to Arkansas. Large arms manufacturers have moved as some states expand regulations. Last year, Remington Arms announced it was opening a facility in Alabama, and Beretta USA said it intended to move all of its Maryland operations to Tennessee.

Arkansas has the fourth highest employment in arms and ammunition manufacturing in the nation, according to the Arkansas Economic Development Commission. Forbes ranks Arkansas among the third most gun-safe states in America with 42 registered firearms per 1,000 people.

Scott Hardin, spokesman for the Arkansas Economic Development Commission, said three representatives from the commission attended the SHOT Show this year and heard from attendees that Arkansas was one of the few states that appear to be involved in arms recruiting. He said there has been a positive response to the state’s new governor, Asa Hutchinson, because of his reputation for helping the firearms industry.

The Commission’s list of target industries was changed in 2014 to include firearms. The agency ran a full-page ad in the June issue of Guns & Ammo highlighting Arkansas support for the firearms industry and the community for the second change. Also last summer, the Commission sent a delegation to the Czech Republic to carry out a recruitment mission

Remington Arms of Madison, NC operates an ammunition factory in Lonoke that recently completed a $ 32 million expansion. Remington Arms began production in Lonoke in 1969 and employs around 1,300 people.

Umarex USA moved to Fort Smith in 2010, and in 2012 Walther Arms, the US unit of German arms manufacturer Carl Walther GmbH, relocated its headquarters there. Both Umarex and Walther belong to the PW Group based in Arnsberg, Germany and share the space in the development of Chaffee Crossing.

In late 2013, Thermold Magazines moved their headquarters from North Carolina to Fort Smith.

Todd Michael, Thermold’s chief operating officer, said the company was showing a prototype pistol magazine for the Beretta Model 92 at the show.

Michael said retailers appear to have worked through some of their excess inventory and are buying again. The company sold 10,000 30-round magazines used in AR rifles in the past 60 days after months of little interest in the product.

“The market was saturated,” said Michael.

Two manufacturers of special weapons are based in Berryville. Wilson Combat is expanding its facility and employs around 125 people. Nighthawk Custom has more than 50 employees.

Jay Smith, director of business development at Wilson Combat, said he was at the show to look for innovative developments that the company could use in its products or product lines.

“This is the place,” he said. “You can only do so much research online.”

The M1014 – Inside the USMC’s combat shotgun

Musicians come together to raise money for Winchester guitar shop