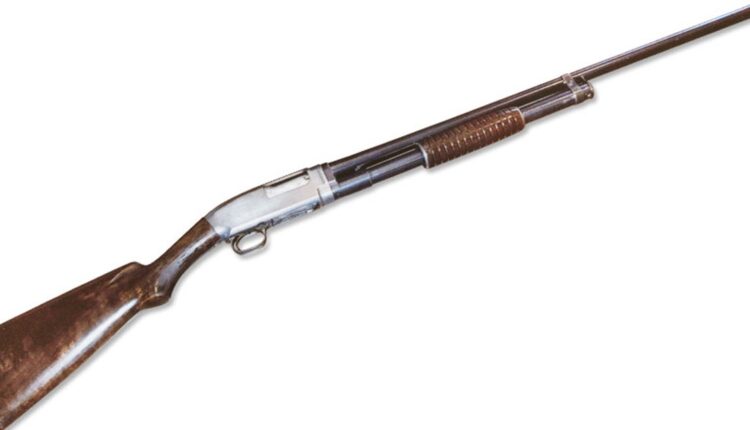 I first heard about the Winchester Model 12 from John Hewitt, who was a regular columnist for Gray’s Sporting Journal until 2007 when a stroke ended his writing career. The Model 12 featured prominently in John’s articles because of his outdoor experiences, and the first book of his collected columns, published in 2013, was titled “The Model 12 Winchester as a Way of Life.” Out of curiosity, I looked at the Model 12 from time to time at weapon exhibitions. I admired the machined steel receiver and its internals, the tight fit between the receiver and the barrel / magazine assembly, the smooth action, and the overall weight and feel of the gun.

Earlier this year my longtime fishing buddy mentioned that among the firearms inherited from his grandfather was a Model 12. Neither he nor his father had ever shot it, and he wasn’t sure about his condition. I asked him to send me some photos of the gun, including all the markings on it. I was able to determine that it was a standard model made in 1936 that was chambered in 16 gauge with a 2 3/4 “chamber. Earlier models had shorter chambers, and ammunition for these guns is now in short supply, but 2 3/4 “16 -ga. Light pigeon loads only require a premium of 25 percent over 12 ga. Shellfish. Plus, the 16 gauge gun in question was just a classic to me. I made him an offer and got the Model 12 last summer.

I tore the gun down first, cleaned it thoroughly, replaced and repaired a few things, and after consulting a few gunsmiths at the local clay course, took it out. It has almost 500 grenades now and it shoots pretty well – I’m grinning as I write this. The looks that I get on the range are just as satisfying as the handling of this classic. The Model 12 is instantly recognized by classic cars like me, and the younger generation is curious about what makes an 82-year-old shotgun so special.

Although I own several other, more expensive shotguns, the Model 12 has quickly become my favorite. I look forward to using it on my next highland hunt.