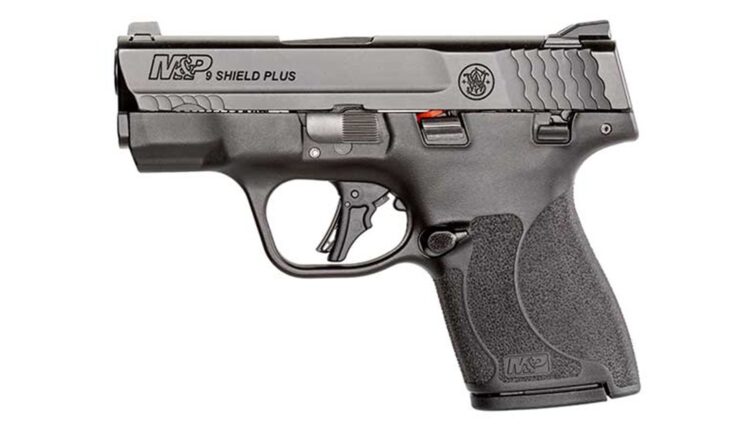 Smith & Wesson joined the ranks of several other manufacturers, offering expanded capacity in a micro-compact carry gun thanks to the introduction of the company’s new M&P Shield Plus. The new pistol takes many of the features that gun owners loved on the M&P Shield M2.0 and combines them with some design improvements that make the gun even better.

To start with, the Smith & Wesson M&P Shield Plus has a redesigned stagger stack magazine that increases the capacity of the flush-fit magazine from seven to ten rounds. The expanded magazine has been expanded from a capacity of eight rounds to 13 rounds, making it a more powerful CCW package than ever before. Despite the capacity increase, the dimensions of the M&P Shield Plus are only slightly wider than the original M&P Shield M2.0, which means it’s still an easy-to-carry pistol. In fact, the Shield Plus fits all standard M&P Shield holsters currently on the market.

Another improvement to the M&P Shield Plus is the addition of an all-new trigger assembly. S & W did away with the traditional hinge trigger safety and instead opted for a blade-in trigger safety as is the case with many other models on the market. The profile of the trigger has also changed drastically and now features a much flatter face in contrast to the curved arch seen on previous models. The trigger also provides a clean pull with a sharp break that aids in accurate shooting.

Several models will be available at launch, including optics-ready guns, performance centers, and guns with manual safety. Each of these weapons will share many of the same features as the M&P Shield M2.0 models, including improved texturing, serrations on the front and rear of the slide, three-point sights, and a 3.1-inch barrel.