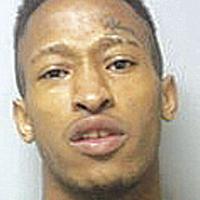 JONESBORO – Two men were arrested by Jonesboro Police on suspicion of possession of drugs and firearms in various incidents.

In the first case, Desmon Love, 26, was arrested from 300 block on East Gordon Street on Wednesday night at the intersection of Hickory and Warren Streets.

Gentry Stevenson, 36, of block 400 on East Gordon Street, was also arrested on suspicion of having meth or cocaine under 2 grams.

In the other case, police arrested Timothy Collums, 32, of block 200 at 421 Baxter County Road, Mountain Home, after a traffic stop at Heern Drive and Metzler Lane Thursday at around 2:15 p.m. on Thursday.

All three suspects are being held in the Craighead County Detention Center awaiting a hearing on the likely cause.

Police arrested Devin D. Renshaw, 31, of the 6000 block of South Caraway Road, Wednesday morning after a break-in on the 2600 block of Judes Park Drive was reported. Renshaw is being held on suspicion of home burglary, property theft, third-degree stalking, violating a protection order, possession of criminal instruments and driving with a revoked driver’s license.

A 51-year-old man from Jonesboro reported Wednesday afternoon that his home had been broken into 1200 block of Greensboro Road. A .22 caliber revolver was stolen. He also reported $ 100 damage from a door jam.

A 26-year-old man from Jonesboro told police that his vehicle had been broken into on Wednesday morning 2200 block of Hurst Lane. A .40 caliber Glock pistol was stolen.

Mills Utility Construction of Mississippi, Oxford, Miss., reported the theft of a trailer with steel tubing, a water pump and a mixing system at the intersection of Oakhurst and Puryear Streets on Wednesday morning. The total value of the items is reported as $ 25,000.

Police arrested John Odoms Jr., 47, from the 2400 block of Skyline Point, Wednesday night after a woman accused him of abducting and physically assaulting her at the intersection of South Culberhouse Street and Cherry Avenue. Odom is being held on suspicion of grievous bodily harm to a family or household member.