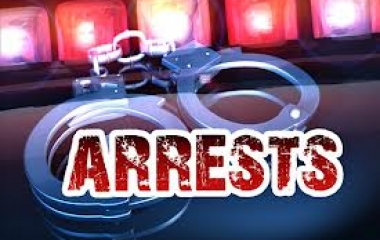 In total, police confiscated seven illegal firearms, nearly 100 rounds of ammunition, and drugs. The timeline, according to a release from PPD, is as follows:

Officers from the PPD Special Investigations Division (SID) located a wanted suspect, 19-year-old Dontorrion Harris, in front of an apartment building near the intersection of W. Romeo B. Garrett Avenue and N. Richard Pryor Place.

He met up with another wanted suspect, 31-year-old Mark Davis. When police approached, Davis was taken into custody without incident. He was arrested for home invasion and a Peoria County traffic warrant.

Harris, on the other hand, fled from officers, barricading himself in the apartment building. The officers breached the barricaded door and after a struggle with Harris, arrested him without injury.

The officers found a loaded assault rifle with the serial number defaced. They also found two other loaded handguns, several magazines, and loose ammunition. Drugs– three grams of crack cocaine and 130 grams of cannabis “packaged for street sales”– were also located, according to a release from PPD.

Harris was arrested for a laundry list of charges, including armed violence, possession of a defaced firearm, and resisting police.

One suspect, 21-year-old Billy Chaplin, was caught throwing a handgun while running away, before he was taken into custody. Police found the loaded “ghost gun” with an extended magazine.

After the chase, a 17-year-old and a 16-year-old were both approved. They each had a loaded handgun in their possession.

Police searched the area and found two more handguns and a Glock 17.

All three suspects were arrested on multiple charges.