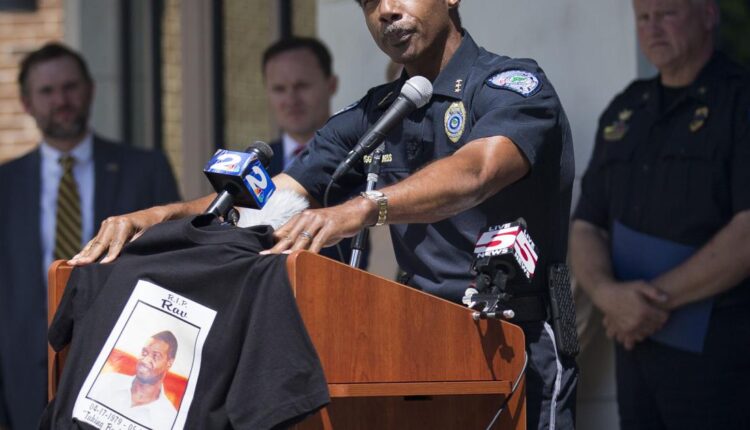 Bailey: Reggie Burgess wants to tell you the reality. Are you ready to hear it? | Commentary

The North Charleston Police Chief looks like a vintage version of the fast wide receiver he was in college, still not an ounce of body fat. He’s wearing a uniform, his .45 Glock on his waist – a weapon he hasn’t used in 32 years as a police officer. His face mask cannot hide his passion.

Behind him are four large billboards, one for each year since he took office in 2018, showing photo after photo of the murder victims who died on his guard. Two other panels with color-coded bar graphs identify victims of violent crimes – murder, aggravated assault, burglary – by race. And the suspects, also by race.

“What is the common denominator of the committees,” asks the boss? “Black Black.”

I tell him that some people get queasy when a white columnist writes about black crime. “I wish you all would print it,” he says. “That’s the truth right there.”

America may have better police chiefs, but it’s hard to imagine a better North Charleston police chief than Reggie Burgess. That’s only partly because he’s black in a city where half the population is black.

Raised in Liberty Hill, the city’s oldest African American neighborhood, Burgess was raised by a mother who had three jobs and (later) a father who worked in the paper mill. Now 56, he knows the people in his hometown – and they know him. He’s spent his entire career here protecting people, and when he can’t, it’s to him personally.

Murder is never far away in North Charleston. The big picture is that murder is happening again on a large scale across the cities.

While crime has generally decreased, homicides have increased. The United States saw its biggest increase in history in 2020, 30% more than a year earlier, and the carnage continued in 2021, the ugly final death toll to come shortly.

Bang Bang Bang As the corpses rise, there is no shortage of explanations: the pandemic, too many guns, the decline in politeness, the increase in anger, fill the void.

But with all the words that are spilled in the newspapers, all the when-it-bleeds-it-by-TV reports, the two most basic questions are seldom asked: who gets shot and who shoots them?

This is because we are uncomfortable with the answers. Burgess doesn’t shy away from it. He wants to talk about it.

“In the city of North Charleston, the victims of crime are African American,” he says, as are the people who fall victim to them.

It goes to its charts: Last year 28 blacks were victims of homicide compared to six whites. The serious attacks were the same: 526 black victims, 157 white victims.

The Charleston police numbers were similar in 2021. The trend in both victims and suspects in both cities has been consistent over 10 years.

In fact, the Centers for Disease Control and Prevention reported last year that black men ages 15 to 34 were 20 times more likely to die from gun violence than their white counterparts. Across all age groups, the number is almost 14 times. Somehow we normalized that. That’s not normal; that is not acceptable.

Life on the street, says Burgess, has changed.

“We used to put our beefs down with our fists,” he says. “These kids don’t do that. They want total annihilation. They don’t care about doing the right thing. We have to protect our reputation – my reputation. You cannot contradict my call. “

Burgess does not minimize the role of poverty in the cycle of violence. In particular, he mentions “unstructured domestic life”, the need for and better education for children who accept it, and better housing and health care. All of these add to hopelessness and crime, he says.

There is no one to be fixed. We need tougher penalties for illegal weapons. The police must work to build trust with the population before the shooting begins. And most of all, people have to say that they have had enough. “And I think we are at that point,” he says.

What Burgess doesn’t want to do is back off from his life’s work of protecting the people of North Charleston.

He raised the city’s ongoing racist scrutiny of the police force and “significant concerns,” as the report put it, of “over-enforcement of certain individuals, community groups and neighborhoods”. Burgess says he supports the exam but then returns to his boards of directors, to the victims and suspects.

Receive a weekly roundup of South Carolina opinion and analysis from The Post and Courier in your inbox Monday night.