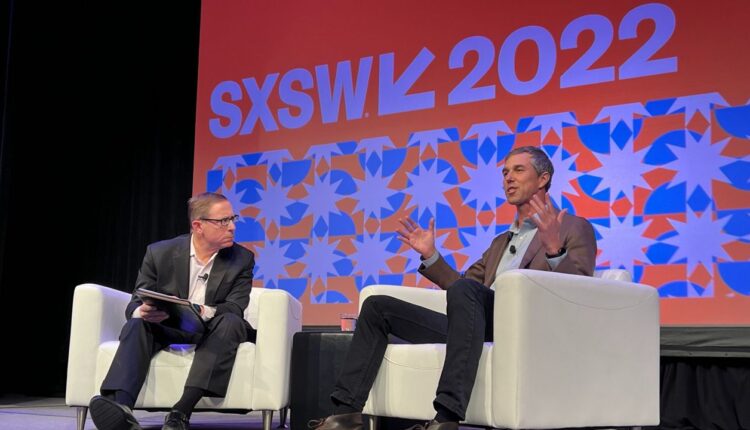 AUSTIN, Texas — As part of his campaign for Texas governor, former US Rep. Beto O’Rourke, D-El Paso, took to the stage at SXSW Saturday to explain why he should replace the state’s current two-time governor, Greg Abbott .

No Democrat has won a statewide election in Texas since 1994, but O’Rourke has come closer than any other member of his party. He was 216,000 votes shy of replacing US Sen. Ted Cruz in the 2020 election and is betting his grassroots strategy of focusing on disenfranchised voters can increase turnout, despite the state’s recent enactment of new voting laws.

Following are excerpts from O’Rourke’s conversation with Texas Tribune Chief Executive and Co-founder Evan Smith during the SXSW conference. The conversation has been lightly edited for clarity.

O’Rourke: You’re seeing the continued rise of authoritarians and thugs across the world. We have our own in the state of Texas. Greg Abbott is a thug and an authoritarian, not only through his incompetence not keep the lights on in the energy capital of the planet, but when CEOs made more than $11 billion in profit over five days selling gas for 200 times the going rate. Not only did he not claw back illegal profits, more than 700 people who literally froze to death had no justice. People are paying tens of billions of dollars for property damage.

You think they rig elections in other parts of the planet. This is the toughest state of the nation to vote; 50% of mail-in ballot requests were denied in some counties, including veterans. This is a guy who is attacking women and won’t allow them to make their own reproductive health decisions. He puts a $10,000 target on the backs of anyone who tries to assist them.

Seven out of ten fourth graders can’t read at a grade level, and teachers are grossly underpaid. What’s he doing about it? Targeting transgender kids and their parents. That’s what this guy is doing in the highest position of public trust in this country.

We need to make sure we get back to the big things: creating great job, world class schools, expanding Medicaid. We can do that, but we have to get past this guy, this extremism, these fringe politics that are so deeply hurting people in the state of Texas.

Absolutely. While the governor has this crazed fixation on transgender kids and their families, he has been told for the last seven years that we have a crisis in foster care. Kids in Child Protective Services offices are sleeping on top of the desks, in hallways, underneath tables because they can’t be placed. Four months ago, Gov. Abbott was warned about a facility not too far from Austin, where children who have ben trafficked for sex are in custody and in the care of the state of Texas are being abused by their caretakers. Those same kids who had been rescued from sex traffickers are now being trafficked for sex by their guardians in the state of Texas. Th governor knew there was a problem for four months and did not do [anything]. He tried to further divide and fracture and polarize the state. We have real problems in the state of Texas that we will focus on when I’m governor.

I would have weatherized the gas supply, connected the Electric Reliability Council of Texas to the national grid to draw down power when we need it. El Paso got just as cold, but we didn’t lose power. We could draw power down. We’re Texans. We generate a lot of power here. We can sell it back to the grid. I would impose on an independent market monitor who can be the cop on the beat so no one ever charges 200 times the going rate for gas. I want to make sure we invest and create the jobs to winterize and create energy efficiency in our homes, offices and buildings to pay lower rates and be less dependent on oil and gas.

The 2021 voting law passed by Republicans

The new law requires that when you want to vote by mail, you have to use the same form of ID with which you originally registered to vote and match that with the ID you have now. A WWII veteran may have registered to vote 70 years ago. It’s always the people in power trying to hold onto that power by stopping those in this state from voting and freely and fairly representing their interests. It’s the same game plan taking place right now. I wish the Department of Justice would intervene. I wish the Senate would pass the John Lewis Voting Rights Act. No one is riding to the rescue. This one is on us.

Does he support confiscating AK47s and AR15s?

I don’t think anyone should have them. If I can find consensus in the state of Texas that allows us to buy them back, I will. I cannot mandate or dictate anything. I have to do this by listening, working with people and building goodwill and consensus. I do not believe that any civilian should have an AR15 or AK47. They were designed for a single purpose: to kill people on a battlefield. I’ve met with many people who have been shot by an AK47 after 23 people were slaughtered because someone inspired by Donald Trump and Greg Abbott who was asking Texans to defend themselves came to El Paso and shot up a bunch of people.

I also want to make sure, as a Texan who understands that we defend the Second Amendment, that all of us who grew up using guns for collecting, sport, hunting and using them responsibly, that we build on that and find common ground with Republicans on universal background checks, safe storage laws and extreme risk protection orders to find consensus and compromise and defend the Second Amendment and save more lives in the process.

Does he support the border wall?

Does he support open borders?

No. I live on the border, as you know. El Paso happens to be one of the safest cities in the US It was the safest city in the US prior to the building of the wall that was started by President Bush and continued by President Obama and President Trump. Crime rates went up during the wall’s construction and after it went up. What we don’t need is more chaos and confusion, which is what the governor is creating on the border. He’s activated 10,000 members of the state guard and deployed them to the border. Four of those guards have taken their lives; two others have died in accidental gun discharges, not at the hands of immigrants. All of them are taken from their true purpose in life. It’s costing all of us millions of dollars. We are the defining border state. We cannot lead if we lead with fear.

This is all about finding common ground. No one will get everything they want. The epidemic of maternal mortality is three times more deadly for Black women. When you shut down reproductive health care in Texas, it’s not only harder to get an abortion but cervical cancer screening. It’s harder to see a doctor in rural Texas. We lead the nation in rates of teen pregnancy and repeat teen pregnancy. We’ve got to make sure people can make their own decisions about their own bodies. It’s not only about abortion but saving the lives of people in this state. There’s some common ground with people who say they’re pro-life. Direct their attention to Child Protective Services and the state foster system and girls who are being trafficked right now. There’s a lot more we can do to save lives in the state of Texas, and that’s a great conversation we’re about to have.

When I’m governor, we will legalize marijuana in the state of Texas. No longer lock up people for possession for a substance that is legal in so many other states in the country. It’s not enough to legalize it. We also have to expunge the records for those who have served time. I’ll let you in on a secret. Republicans like to get high just as much as Democrats. This is one of the most broadly popular issues.

After car chase, arrest made in 2021 Broadway gunfire