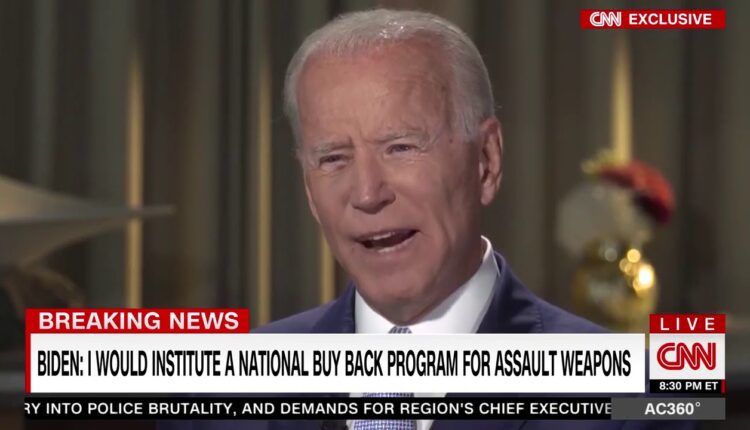 United States –- (Ammoland.com) – During the campaign, Anderson Cooper asked Biden what he would say to gun owners who were concerned that a Biden administration was coming for their guns.

“Bingo,” Biden replied to the host with a cocky smile. “You’re right when you have an offensive weapon.”

In the next breath, the mainstream media tells us that Biden and Harris support the Second Amendment, and gun rights advocates are just “conspiracy theorists” trying to scare the public.

When Joe Biden posted his gun control plan on his campaign website, it was far worse than most gun advocates feared. The gun control list comes from Michael Bloomberg’s wildest dreams. There has never been a more draconian plan in our nation’s history. The list of proposed laws would affect every gun owner in America.

Anti-gun Democrats are trying to sell the public with the idea that mass shootings are going on everywhere. In reality, mass shootings are extremely rare. In fact, the United States, when population adjusted, is not the world leader in mass shootings as Biden would have people believe. According to the Crime Prevention Research Center, Norway, France, Switzerland, Finland, Belgium and other countries have a higher per capita rate of mass shootings than the US.

If you want to find out what someone is going to do, take a look at what they have done in the past. Biden spent decades in Congress and was never a friend of gun owners. In 1993, Biden helped launch the Brady Handgun Violence Prevention Act. The act instituted a state requirement for background checks when purchasing firearms. Statistics show that the law is nothing more than a comfort measure for anti-gun groups. Most criminals do not buy their firearms legally, which defeats the purpose of the background check. If Biden finds his way, the government will prevent gun owners from loaning their guns to a friend for hunting or for range without first doing a time-consuming and costly background check.

A year later, Biden worked with fellow Democrats to pass the federal ban on assault weapons.

The ban limited the guns Americans could own because of cosmetics and arbitrarily limited the magazine size to ten rounds. The law even banned weapons that could have a bayonet attached. Bayonets have not been raised since 1865. The ban had been in place for ten years and had no impact on the violent crime rate. Biden has said several times that he will bring back the ineffective ban.

Contrary to the original ban on gun owners from keeping their legally acquired firearms, Biden’s new plan would add existing firearms that fall under his Dream Act to the register of the Nation Firearms Act. Gun owners would not only have to register their guns, they would also have to pay a fee of USD 200 per gun for a “tax stamp”. For collectors, these fees could add up to thousands of dollars. Biden would give gun owners the only other option to turn their property over to the government for pennies on the dollar.

Americans have a better chance of being killed by hammers or fists than a modern sporting rifle.

In fact, more people die if they are wrapped in sheets than if they are killed by what the president sees as an “offensive weapon”. The ban on semi-automatic firearms has nothing to do with safety. It is about a fundamental hatred of the second amendment.

Another worrying thing Biden is pushing is being allowed to sue gun manufacturers for the crimes of others. If arms manufacturers lose their immunity, it would make arms manufacture economically impossible. A lawyer lawsuit could put companies out of business overnight. It would be like a victim of a drunk driver suing Ford.

Biden also wants to limit the number of firearms an American can buy per month. This restriction is similar to the government that controls how many Bibles one can buy. Limiting the number of times an American can exercise their rights goes against everything the Founding Fathers believe and is a direct attack on our country’s foundation.

If a person is subject to social security contributions and has problems managing their finances, Bidens would like to deprive that person of their gun rights. The person does not have to be a danger to himself or to others. A simple financial problem would be enough to remove that person’s rights for life. A generation of Americans fought for our God-given rights, and Biden would see an overbearing bureaucracy deprive them of those same rights.

One of the most devastating laws on Biden’s gun control item wish list would injure gun owners and kill thousands of jobs. Biden wants to ban the online sale of guns, gun parts and ammunition. Online retailers like Brownell’s and Midway employ thousands of Americans in high paying jobs. Overnight, Biden would push these taxpayers to the unemployment line.

Also, Biden ignores the fact that people who buy guns online don’t have them shipped straight to their homes. The online retailer must send the gun to a licensed dealer who will do the same background check as they would for people who buy guns directly from their store. The only thing this law does is put companies out of business and place undue burden on the gun owner.

Biden also tosses around terms like “ghost guns,” which is nothing more than a scary term to demonize those who choose to make their own firearms. He urges the narrative that gang members and criminals produce millions of homemade weapons. Nothing is further from the truth. Americans have a long history of building homemade firearms, and it is easier for a criminal to buy a gun illegally than it is to make one from scratch or a kit. Plus, criminals would just ignore the law anyway.

Anyone who uses a biometric system for work or on their iPhone will tell you that this technology doesn’t work 100% of the time. That fact isn’t a big deal when it comes to cell phones, but when your life depends on something that works, most of the time it isn’t good enough. The goal of advancing smart gun technology is not to make us safer. The point is to make firearms so expensive that they are inaccessible to those whom the anti-weapons billionaires consider “less desirable”.

After all, Biden wants to do much more than just violate the gun owner’s rights under the Second Amendment by banning the possession of commonly used firearms. There is more on his agenda than just restricting people’s initial customization rights by banning code used to 3D print gun parts. He also wants to violate the rights of the fourth and fifth amendments by enforcing so-called “red flag” laws. These laws would deprive gun owners of their firearms without due process. An American’s guns can only be taken by someone who brings an unsubstantiated charge in a secret court where the gun owner cannot defend himself. These laws endanger both the gun owner and the police, who want to force Biden to issue these orders.

Anne Arundel County Police in Maryland shot and killed Gary Willis, who came to the door with a gun, when officers showed up at his home shortly after 5 a.m. According to his niece, the red flag law was filed by another family member in what she described as the average family drama. She said her uncle was not a threat to anyone, and yet this unconstitutional law advocated by Joe Biden killed him.

Joe Biden is the anti-gun president in our country’s history and will make it difficult for gun owners for four years. All is not lost, however. With eight million new gun owners in the nation, we can become the most powerful American electoral bloc. Politicians respond to pressure and it’s time to put it to eleven.