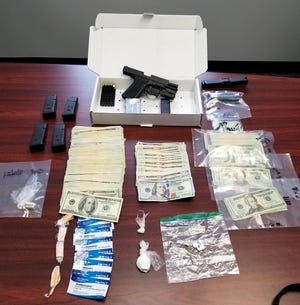 BRIDGE WATER – Two men accused of selling fentanyl across the region face drug and gun charges after police conducted a “lengthy investigation” that culminated in the execution of several search warrants.

The WEB Serious Crime and Drugs Task Force arrested and charged two Bridgewater men a teenage Friday after “investigating allegations that two men were in partnership with fentanyl in and around Brockton and the surrounding communities”.

Police said through the investigation they had found a likely cause for two men, later identified as Juelson Miranda and Kerby Dieudonne, “arranging narcotics sales out of their homes.”

The detectives then requested two search warrants – one for each Bridgewater residence at 119 Maple Ave. and 384 Oak St.

These arrest warrants were carried out around 6:05 a.m. on Friday.

According to police, detectives confiscated 11.5 grams of fentanyl, 1 gram of crack cocaine, three oxycodone pills, a large amount of Suboxone, about $ 11,000 in cash, a loaded 9mm pistol, several large capacity magazines, Parts of the gun assembly, several rounds of ammunition and numerous individual packages of marijuana.

Police say they also charged a Bridgewater youth, whose age was unknown, with trafficking a Class A drug (fentanyl).

“These arrests were the result of a lengthy investigation conducted in conjunction with several state and local authorities,” East Bridgewater Police Chief Paul O’Brien said in a written statement. “Thorough and efficient policing helped us to remove a significant amount of drugs and dangerous weapons from our streets, and I commend every single officer involved in these arrests.”

Miranda and Dieudonne were tried in Brockton District Court on Friday, but the results of their charges were not immediately available.

The company’s senior reporter, Cody Shepard, can be reached by email at [email protected] You can follow him on Twitter at @cshepard_ENT. Support local journalism by purchasing a digital or print subscription to The Enterprise today.