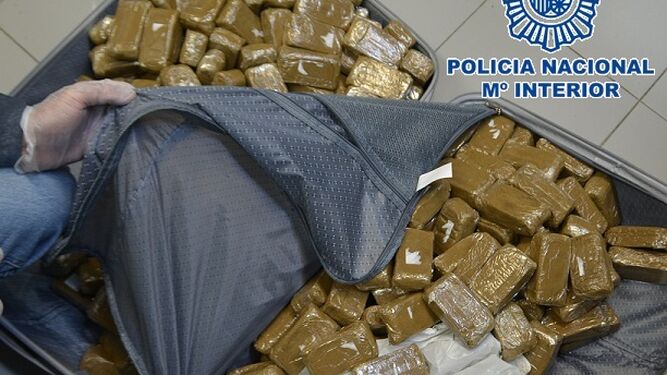 National police officers have worked tirelessly on an operation to break up a British drug gang in Malaga. National Police officers, in coordination with the UK National Crime Agency, have disbanded a criminal organization in Malaga, mainly composed of British and Polish nationals, which is involved in the drug and arms trafficking.

Operation Ambulance breaks up a British drug gang and investigators have arrested 17 people for alleged involvement in the crimes of drug trafficking, gun possession, electricity fraud and membership of a criminal organization.

The provincial police station said in a statement, “The investigation began after the arrest of the driver of a delivery truck, a British national who tried to evade a police checkpoint in Estepona last April, when £ 200,000 was confiscated from the trunk of the Vehicle “. During a search of his home in Estepona, the agents confiscated a semi-automatic pistol and 44,000 euros. The criminal was then extradited to the requesting country.

International police cooperation was activated and UDYCO Costa del Sol officials learned from the UK National Crime Agency that the money seized in Estepona came from the illegal activities of a violent criminal organization that operates primarily in the UK town of Warrington and is mainly composed of British nationals . whose main activities were the illicit arms trade, drug trafficking and laundering of profits from criminal activities.

According to the proceeding, the organization aimed to supply drugs and weapons for export to the UK using trucks and vehicles for road transport. In February of this year, a van with 29 kilos of hashish was intercepted in Marbella. The officers arrested the driver, a Polish national.

From that moment on, events accelerated and it turned out that the organization was getting the drugs on a farm in Alhaurín El Grande. Officials discovered a truck leaving the property in the Guadalhorce Valley along with two “shuttle” cars, the van eventually being intercepted in a mirror in Vélez-Málaga and 91 kilos of hashish. This action resulted in the arrest of the driver of the truck and four other people who performed support and security functions in Algarrobo. All of these actions marked the beginning of the breakup of the British drug gang.

Several searches were carried out in different locations during the operation. In total, the officials found that the British drug gang they disbanded had found 188 kilograms of hashish, 31 kilograms of marijuana, 355 cannabis-sativa plants, 3.2 kilograms of cocaine, 64,980 euros in cash, 17 vehicles – seven cars, six motorcycles, three vans and a truck, semi-automatic pistol, marijuana packaging tools, cell phones, documentation, and tools.

Thank you for taking the time to read this article. Make sure to come back and visit The Euro Weekly News website for all of your breaking news, local and international. Remember you can also follow us on Facebook and Instagram.