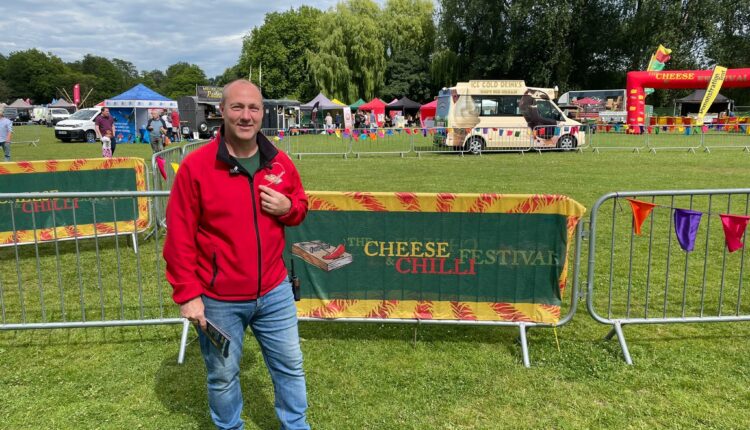 In the absence of any consistent sunshine, the Cheese and Chilli Festival brought the heat to Winchester this weekend.

Scores of families turned out for the seventh edition of the popular event which was held at North Walls Recreation Ground on Saturday and Sunday.

Punters with a taste for fiery foods flooded through the gates in their droves to try tastings, cookery classes and indulge in a selection of street food and locally brewed beers.

Aside from exciting the tastebuds, there was also a host of entertainment including stunt shows, dog talent competitions, crazy golf and traditional Punch and Judy style comedy on offer.

Professor JR has been performing his Punch and Judy routine to crowds of kids at the Winchester Cheese and Chilli festival for three years on the trot – albeit with a Covid-enforced break in-between.

He said: “I saw a show around 10 years ago and thought to myself, ‘you know what, I can do this’, so I did. I’ve been performing at this event for three years now and the kids absolutely love it “Punch and Judy is traditional entertainment but it has stood the test of time, and I think that is because it has evolved over the years. I always love doing the Winchester Cheese and Chilli festival – it never fails to pull in the crowds. The.” only worry is usually the weather.”

The festival was awash with traders selling everything from spicy sauces to sweet treats as businesses came from far and wide to showcase their products.

Kevin Gover, owner of Fire Foods and Wiltshire Chilli Farm, had stalls in place for both of his businesses at the festival. This year was the fourth time he’s pitched up at the Winchester event as a trader.

“The festival has been great,” he said. “We were very busy yesterday despite the fact the weather wasn’t behaving. It has been a little bit slower today but that is often the case with Sundays, but we’ve done pretty good overall. I do all of the Cheese and Chilli festivals. They are always a nice atmosphere, run really well and the organizers are good to us and look after the traders in terms of the pitch prices.”

Mr Gover had a range of cheekily named sauces on sale which proved a hit with customers.

He said: “People love the Fire Foods side of things. As the Wiltshire Chilli Farm we do classier sauces and a big range of flavors from mild to hot with the aim of appealing to everybody. The Fire Foods side is all very hot, all very dubious levels of humor and there is nothing subtle about it. But, they appeal to different sides of the brand – so there is something for everybody.”

In contrast, Henry Kay, owner of Farnham-based In The Buff Protein Ketchup was visiting the festival for the first time. He said he had almost sold out of his range of his vegan spicy ketchups, which he claims are the first high-protein sauces of their kind.

“I created them myself because I wanted to have a condiment that actually gave a bit of a health benefit and not just flavor and moisture at the expense of whatever rubbish is in the sauce,” he said.

“We’ve been really busy this weekend, the sauces have proved hugely popular – especially the Chipotle smokey chilli flavor. I suppose because it is BBQ season it makes a great accompaniment to anything like burgers, sausages and steak. I’ve loved the festival, it has been absolutely flat out.”

Adult tickets were priced from £7 while children went free. A host of bands supplied a backing track for the festival throughout the weekend.

Headteacher of Barton Stacey Church of England Primary School, Lee Stangroom, spent the Sunday sampling some of the treats on offer.
He said: “I came with friends, some of them were at the festival last year but this is my first time. I spent some time trying various cheeses and chillies, some of which were incredibly hot.

“The weather has been lovely and the kids have had a fantastic time. All of the bands have been brilliant and it has been really nice and relaxed – I’d definitely come back again. I’m staying until the end for the chilli eating competition – but I probably won’t be taking part!”

Event organizer Simon Stewart said: “We had a year out for Covid but other than that we’ve been here every year since 2015. We absolutely love Winchester, the atmosphere and audience is great, the traders trade well, there’s a nice feeling about the place, we’re well received by the local community and the council are a pleasure to work with.

“So, from an event organization perspective it is a great place to work. We have had a great turnout across the two days, especially given that the weather has been a little bit unpredictable.

“The products here are fantastic. We know the event is good value, a family of four or five can have a day out for £14 and not have to spend much more than that as we put on loads of great free entertainment.

“We also know the products which are for sale inside are top range so people can come and shop well should they want to. The concept of the shows came about because my wife and I had two young babies at the time and we went to a show and spent nearly £50 to get in and then didn’t have the money we needed to go to the funfair and get the kids treats.

“So, we wanted to make an event which was more family focused where kids go free so everyone has the opportunity to enjoy the day.”

As ever, the weekend was brought to a close by the chilli eating competition – which sees a host of have-a-go heroes pit their taste tastebuds against chillies which top the Scoville scale.

“The competition is always my personal highlight, it never fails to entertain,” Mr Stewart said.

“People don’t realize just how hot some of these chillies are, and when they take part I think it is a bit of an awakening for them. It really is unique, every time we do this show someone reacts differently.
“We’ve done this more than 30 times over the years and every single time is as funny as the last.”