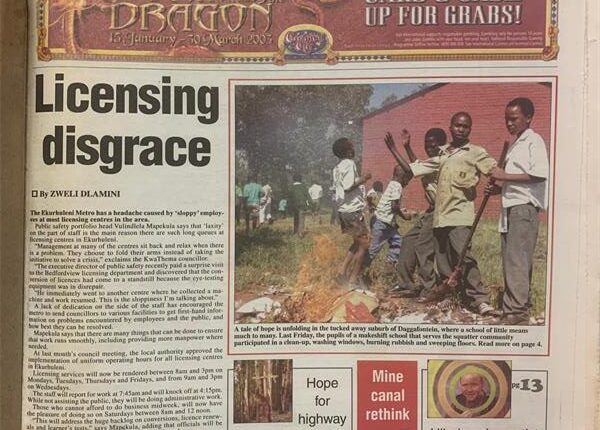 The front page of the Advertiser’s February 7, 2003 issue.

This week we’re looking at the advertiser’s February 7, 2003 issue.
• “This is my bike!”
“It felt great to get my bike back!” says Springs Court Attorney General Kobus Rademeyer.
After getting home from work last Monday, he was ready to get on his bike for a ride.
However, when he opened the garage door, he was shocked to find that his bike was nowhere to be seen.
“Somebody opened my garage door and stole it while I was at work.”
A few days later, Rademeyer passed a thrift store and noticed that he noticed a bicycle similar to his own that was being sold in the store.
“I reclaimed it from the owner after showing my ID and completing some paperwork,” says the happy man.
The prosecution has opened a burglary and theft case at the local police station.
“I felt great,” laughs Rademeyer.

Read also: Delving into the Past

• The man’s legs were crushed in the Strubenvale crash
The driver of a motorcycle smashed his leg after a serious accident on Friday afternoon.
The collision involved the bicycle and a Volkswagen Golf at the intersection of Victoria and Ermelo streets in Strubenvale around 1:45 p.m.
Authorities say the Gulf was spilling into Victoria Road and the bike was coming right across the intersection off Ermelo Road when the two collided.
The man’s right leg was badly injured and was still recovering in the hospital at press time.
According to the underground police, no further serious injuries have been reported.
• Arrested gun dead
A couple may have been stopped by police last week to commit a crime.
A 45-year-old man and his wife were arrested for possession of firearms and ammunition in Vosloorus last Wednesday after the East Rand Murder and Robbery Unit received a tip.
An illegal 9mm pistol, two Ak-47s and ammunition were confiscated.
The police are now investigating whether the two have prepared to commit a crime with the guns.

Read also: Delving into the Past

• Thieves leave a hole in the wall
Off-the-wall thieves proved they were no longer deterred by brick and mortar.
Maans Swart from WH Services came to work last Thursday morning to find a gaping hole in the wall of his Strubenvale workshop and an empty space where his 1-ton R50,000 welder was standing.
“You think your things are safe behind a wall,” says Swart ruefully, “but thieves managed to tear down my wall without setting off the alarm.
“Of course they must have known exactly what they wanted.”
Swart alerted the police and went in vain to find local junkyards.
He must now replace what he calls the backbone of his business while waiting for the insurance company’s payout.