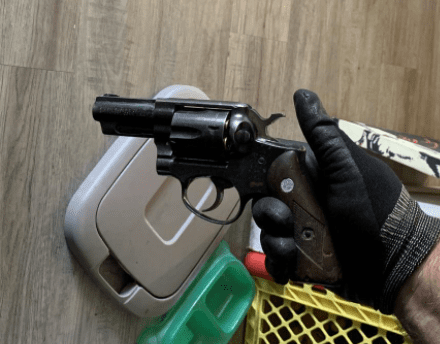 Thanks to the efforts of several authorities, police arrested two criminals and retrieved two firearms in SeaTac on Thursday afternoon. One man is a suspect in multiple robberies in northern Seattle and the other is a suspect in a shooting outside of Seattle.

The men are suspects of two robberies in northern Seattle four days apart. In the first robbery, the victim was driving his car near North 100th Street and Aurora Avenue North at around 2 a.m. on March 19 when two suspects stopped him and robbed him at gunpoint. The suspects then fled in a silver coupe. At around 3:20 a.m. on March 22, a woman reported that a man robbed her at gunpoint on the 9100 block of Aurora Avenue North and then escaped in a silver coupe. Through their investigation, Robbery Detectives discovered that the same car was used in both crimes and began tracking down the suspects.

Working with detectives from the Gun Violence Reduction Unit and with help from the King County Sherriff’s Office, the Department of Corrections and the US Marshals Service, detectives found the two men at an address in SeaTac.

SPD officials from SWAT and the Community Response Group arrested the suspects around 3 p.m. yesterday. Despite the suspects’ efforts to hide their weapons in a neighbor’s house, local police confiscated a semi-automatic pistol and revolver. The pistol had been reported stolen.

Officials booked a 24-year-old man into King County Jail for robbery and wrongful possession of a firearm. A 23-year-old suspect was also admitted to the KCJ for improper possession of a firearm, in addition to a first-degree attack related to a shooting outside of Seattle that occurred just two hours after the March 19 robbery.