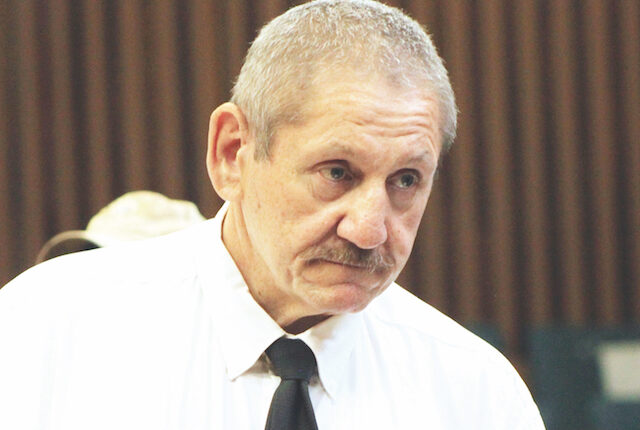 DNA test results link firearm parts and a holster buried in the desert near Arandis to the man accused of murdering the two senior officials of the Namibian Institute of Mining and Technology (Nimt) in April 2019.

A former senior forensic scientist at the National Forensic Science Institute of Namibia, Maryn Swart, testified in the High Court Thursday that a DNA profile found on gun parts and a holster presented to the institute for investigation contained the DNA -Profile of a reference matched sample labeled ‘Suspect’, which was also analyzed by the institute.

According to earlier testimony heard during the trial of Ernst Lichtenstrasser, a former Nimt employee, a doctor in Walvis Bay took the reference sample from him in May 2019 – one month after Lichtenstrasser was arrested in connection with the murder of the Nimt managing director Eckhart Müller and his deputy Heimo Helwig.

The estimated chance of randomly selecting an unrelated person from the population of Caucasion with the same DNA profile as the profiles on the gun parts and holster is one in non-1.62 million, Swart concluded in a report presented to the court.

With a non-million, which is a one followed by 30 zeros, this is an extremely low probability.

During the trial of Lichtenstrasser before Judge Christie Liebenberg last week, the court also heard that a team of police officers had discovered the items that were found on Jan.

A Namibian Police Crime scene officer, Warrant Officer Fernanda Ganda, testified that she was called to the location where the items were found on a ledge to take pictures.

Items found there included parts of a disassembled pistol, a holster, and 18 sharp bullets, Ganda said.

The gun parts, the holster and the ammunition were discovered one month after Mueller (72) and Hellwig (60) were shot down on April 15, 2019 at the Nimt headquarters in Arandis.

The state claims that Lichtenstrasser, 60, shot the two men with an unlicensed 9mm pistol after arguing with them about the decision to move him to Keetmanshoop from the Nimt campus in Tsumeb, where he was stationed embarrassed.

The state is also accused of having fled the scene of the fatal shooting and drove into the desert near Arandis, where he allegedly dismantled the murder weapon and buried it with its holster and ammunition.

Lichtenstrasser denied guilt on eight counts – including two charges of murder, possession of a firearm and ammunition without a license, and one charge of evasion or obstruction of justice – when his trial began in February this year.

At the end of Swart’s testimony on Thursday, the trial was postponed to March 14th next year.

The process is also expected to continue in the week of March 28th and July 18th, 2022.

Lichtenstrasser, arrested in Karibib on the evening of April 16, 2019, is on remand.

He is represented by attorney Albert Titus for legal aid.

‘Are You Going to Keep Me Safe?’ Hospital Workers Sound Alarm on Rising Violence