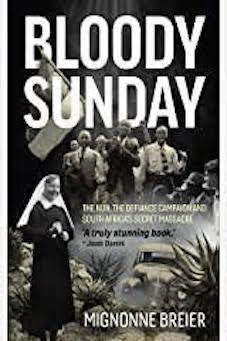 On Sunday, November 9th, 1952, the largest mass murder of black South Africans by the apartheid regime allegedly took place in a dark “native location” outside the “white” coastal city of East London. And was covered up.

However, the events of that weekend could not be completely hidden – one aspect of a long and intricate chain of events became garish headlines not just in South Africa – but around the world: murder, dismemberment, and rumors of cannibalism of the body in that remote bowl of dust called Duncan Village of the Dominican nun and venerable doctor Sister Aidan. But since that fateful Sunday, the shadow of ‘Sister Doctor’ Elsie Quinlan, once from Ireland’s County Cork, has been a silent witness pointing from the grave to the unknown masses who died during the subsequent frenzied retribution by the police and are their stories inextricably intertwined with hers.

By the date of that fateful Sunday, the ANC had been pursuing nonviolent policies for five decades, centered on hopes to gradually redress the situation in the country. When Mandela and his “young guns” were elected to the ANC executive in 1947 and ousted a “fuddy duddy” old guard, they conducted a study of Gandhian’s passive resistance techniques, initially invented by Gandhi in the heart of old Johannesburg stayed in South Africa in the 20th century.

The ANC came up with the idea of ​​launching a nationwide program of peaceful protests against passive resistance. Known as the “Defiance Campaign”, all actions were carefully planned, with “Defiers” being meticulously trained and the focus being on the barely threatening violation of “little apartheid” laws, such as entering a post office through the “wrong” entrance. The real threat to the state, however, was not so much the campaign – but the rapid increase in the number of ANC members that followed.

By late 1952, black communities were used to monitoring brutality. But the police response to the Defiance campaign, which began in April 1952, was a sad occasion for a seemingly endless fight against state sponsored terror for the next five decades.

That day, Sister Quinlan went on as usual. She and her small multiracial group of Dominicans were used to unrest in Duncan Township, where the white nuns had to be given special permits to live. Just two years after working there, the other nuns found that ‘Sister Doctor’ was often busy and even confided in Sister Ursula that she was suffering from depression. A strong feature of this book is how the author was able to skillfully reconstruct aspects of Sister Aiden’s inner life.

But what was Sister Aiden? After the brilliant young postulant arrived in South Africa in the 1930s to join the Dominican Pioneer Order in the remote King Williams’ Town of the Eastern Cape, he won the jackpot. With support from the Church, she applied for and completed a medical degree at the prestigious University of the Witwatersrand in Johannesburg, building on her possession of an Irish BSc. According to Breier’s account, Elsie revered this period stretched from the challenge, the stimulus of cosmopolitan Johannesburg, and the opportunity to serve.

When Sister Aiden arrived in the oppressed Duncan Village, she was faced with the reality of the dire social consequences of apartheid. Your notes tell a dark story. On a routine day, she saw up to 170 patients, many of whom had completely preventable diseases such as beriberi, pellagra, kwashiorkor, and scurvy. Elsie Quinlan’s excruciating private straw poll on child mortality was close to 100%.

One gets the impression that Sister Aiden was very much loved, but that she wasn’t nonsense either. What it might have done to publicize the truth about South Africa’s contemptuous “separately but alike” lie is only speculative. But Elsie Quinlan died unexpectedly that Sunday from a mob that became unbearable not only because of their relentlessly poor conditions, but against the background of three separate police murders of unarmed demonstrators, the main offense of which was throwing stones. In the past three to four weeks, no fewer than 22 people were shot dead and dozens more injured in confrontations with police in Johannesburg, Kimberley and Port Elizabeth. Tensions had risen to turn Duncan Village into a tinder box.

The spark that set off the explosion was the police reaction to a “religious” meeting that was – legally – scheduled for the center of Duncan Village. However. Political meetings were forbidden. When it became clear that the meeting was indeed about politics, the police, armed with the 1952 version of an AR15, ordered the diversion. When this was ignored, they declared the open season for this already grotesquely abused community.

But that didn’t stop the mob either. It was only when the Justice Minister refused to take a desperate call from community leaders that Sister Quinlan said, as an eyewitness put it, “Our people then turned on the local whites …” and enjoyed an afternoon outing in her beloved car. drove into an angry crowd on the way to ‘white’ East London. Stoned, then knocked over and set on fire, people in the crowd who tried to help were repulsed. When the police returned to the scene, much of the nun’s body had been torn away, leaving a torso and part of her head. Her rosary, which was clutched by a few burned finger bones, was later recovered.

But the killing wasn’t over yet. Police vans drove through the community throughout the night, raking the weak houses with automatic rifle fire, killing indiscriminately. Breier’s researched evidence suggests that over 200 dead – certainly not from the only eight that were approved by the police. According to reports, frightened families simply merged with the surrounding bush and “unofficially” buried their dead as both morgues and hospitals were monitored by the secret police to collect names of “agitators”.

As forensic journalism, this book is an important study of early apartheid and the ANC’s ethical and careful responses. But above all, it reminds of the life of the beloved Dr. Sister Elsie Quinlan and the unknown number of villagers in Duncan who also died that summer night.

We need your support

ICN strives to provide Catholics and the entire Christian community with quick and accurate coverage of all topics of interest to them. As our audience grows, so do our costs. We need your help to continue this work.

Please support our journalism by donating to ICN today.