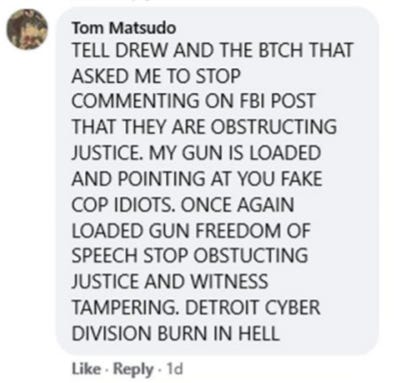 GRAND RAPIDS – An East Lansing man was charged with two federal crimes after police alleged he threatened to attack and kill an FBI agent who interviewed him for Facebook comments and posted posts published by the agency as were marked threateningly.

The FBI pointed to a comment made by 29-year-old Thomas Matsudo on Facebook on December 14, in which Matsudo had made “veiled threats against FBI employees”, according to court records.

According to court records, this was not the first time Matsudo’s comments have been flagged by federal agencies. In December, Matsudo “showed escalating behavior” in many of his comments on posts on the FBI’s Facebook page.

Matsudo’s attorney, Chip Chamberlain, did not respond to a comment on Thursday.

According to court records, many of the posts were sprawling and incoherent. Three entries included were: “DEAD POLICE IS JUSTICE”, “Black hat fraud extortion” and “I OWN PEPPER SPRAY AND GUNS”. Expect to be in front of the gun. ”

Special Agent Drew DeCoster interviewed Matsudo about the posts in early January. Matsudo told DeCoster that he bought one gun and that he owns seven in total, according to court records. However, a request from the Law Enforcement Information Network revealed that he owns four registered guns and a hidden pistol license.

Within three days in March, Matsudo made 15 comments on the FBI’s Facebook page, according to court records. In five comments, he referred to DeCoster and the “BTCH that asked me not to comment on the FBI post”.

“I’m going to light you up every day until you get caught up and die. Look at me. I’m the very angry man with a loaded AR15 ready to shoot you the wrong sex kid with FBI agent on mind with my 30-06 and leave to rot in a ditch … “was one of the comments.