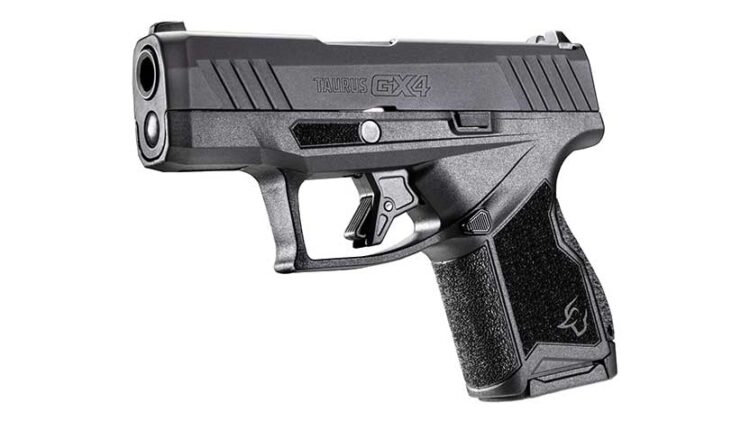 If we look back through the history of concealed-carry-pistol development, we’ll find those models which exemplify a just-right balance of compact size, performance and price point that set a standard for small self-defense guns of the day. That is, until the next thing comes along. One of the earliest examples in this American small-arms race is Henry Deringer’s original single-shot, muzzle-loading percussion cap Philadelphia Deringer introduced in 1852. It was soon displaced by more convenient and reliable cartridge firing guns like the Remington double-barrel Model 95 that arrived in 1866. The early 1900s saw the advent of petite .22- and .25-caliber semi-autos, such as the FN Browning M1905 .25 ACP Vest Pocket Pistol.

As gun-manufacturing technologies have improved, we’ve seen carry guns stay relatively small and lightweight, while the cartridges they’re chambered to fire have increased in size and performance. In the early 1950s, Carl Hellstrom set a standard for snub-nose, double-action revolvers with the Smith & Wesson J-Frame .38 Chiefs Special (which still holds sway today). In the 1980s and 1990s, pocket-size .22s and .25s took a back seat to similarly sized .32 ACP semi-autos, including the Seecamp, Beretta Tomcat and NAA Guardian. In the late 2000s, the .32s were unseated by a flurry of single-stack .380 ACP pistols with polymer frames inspired by the success of the Ruger LCP.

Just as the single-stack .380s took their place at the top of the concealed-carry hill, the race was on to produce affordably priced semi-autos in the same size and weight class but chambered for the popular and more potent 9 mm cartridge. By the mid-2010s, guns shop display cases were replete with slim, feisty, single-stack polymer nines with 6 to 8-round magazines, including the Glock G43, Ruger LC9 and S&W M&P Shield, to name a few.

But in 2018, the success of SIG Sauer’s P365 micro 9 sub compact shifted the attention of the concealed-carry market once more. Sporting a modified magazine, it offered a 10+1 ammunition capacity with a 1″ wide and 4.1″ tall profile like that of the single-stack models. There were other micro 9-type pistols before the P365, like the Kel-Tec P11 (1995) and SCCY CPX series (2005). But much like the Ruger LCP .380 ACP, it struck a chord with folks and sold like hot cakes. Since then, we’ve seen the arrival of additional micros from well-recognized manufacturers, including the Springfield 11+1 ammunition capacity Hellcat (2019), Smith & Wesson’s 10+1 Shield Plus (2021), and the Ruger 12+1 Max-9 (2021). 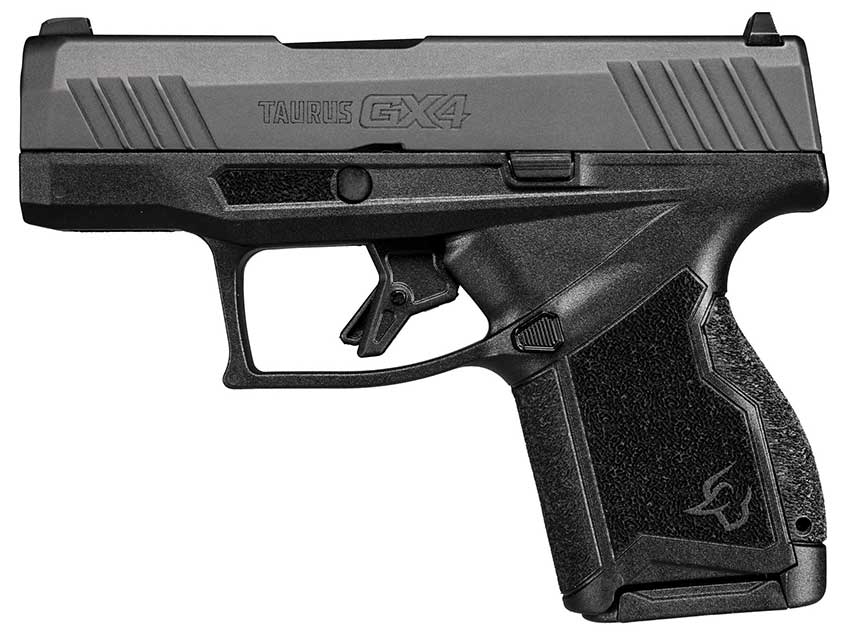 The next gunmaker to throw its hat into the micro 9 ring is Taurus USA with the new-for-2021 model GX4. With a good selection of other pistols to choose from, it’s reasonable to wonder what Taurus could bring to the table. The models mentioned above have suggested retail prices for basic versions ranging from $499 to $599, with the Ruger Max-9 being the least expensive of the pack. The first version of the GX4 is launching with a suggested retail price of $392.42. That’s over $100 to $200 less than the competition with real-world prices that are likely to be even lower. Having shot some of these other micro 9s, I was curious to see what the GX4 has to offer. 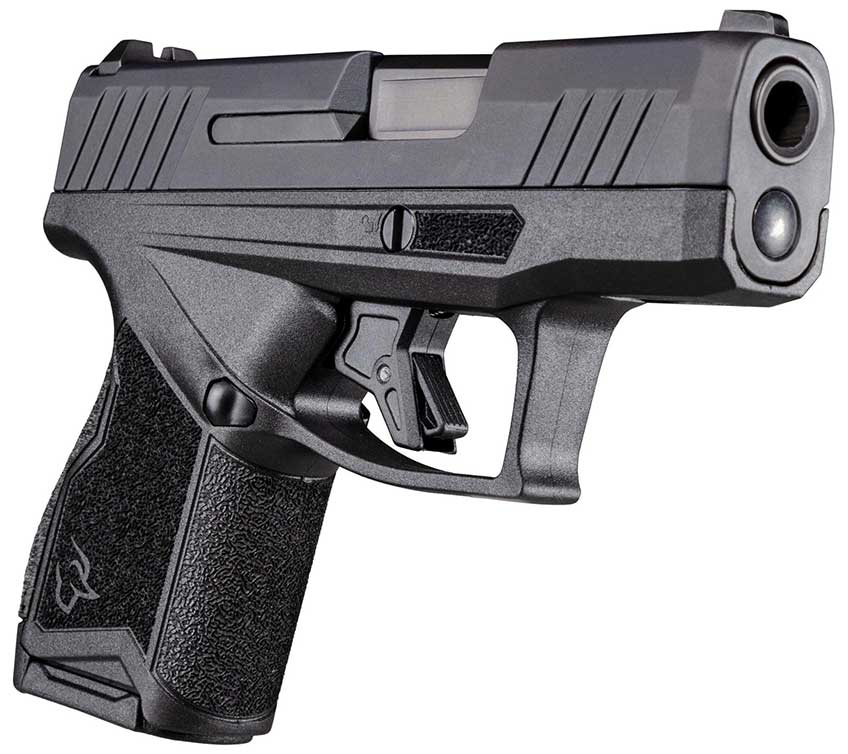 The GX4 is a striker-fired semi-auto that employs a short-recoil, locked-breech action. Before I received one to work with, I speculated that the GX4 might be an even more compact version of the company’s G3c carry pistol, but that’s not the case. Along with its smaller size, the GX4 differs both cosmetically and mechanically from the G3 series. The components are manufactured in Brazil by Taurus and then shipped to the company’s Bainbridge, Ga., facility for assembly here in the United States. 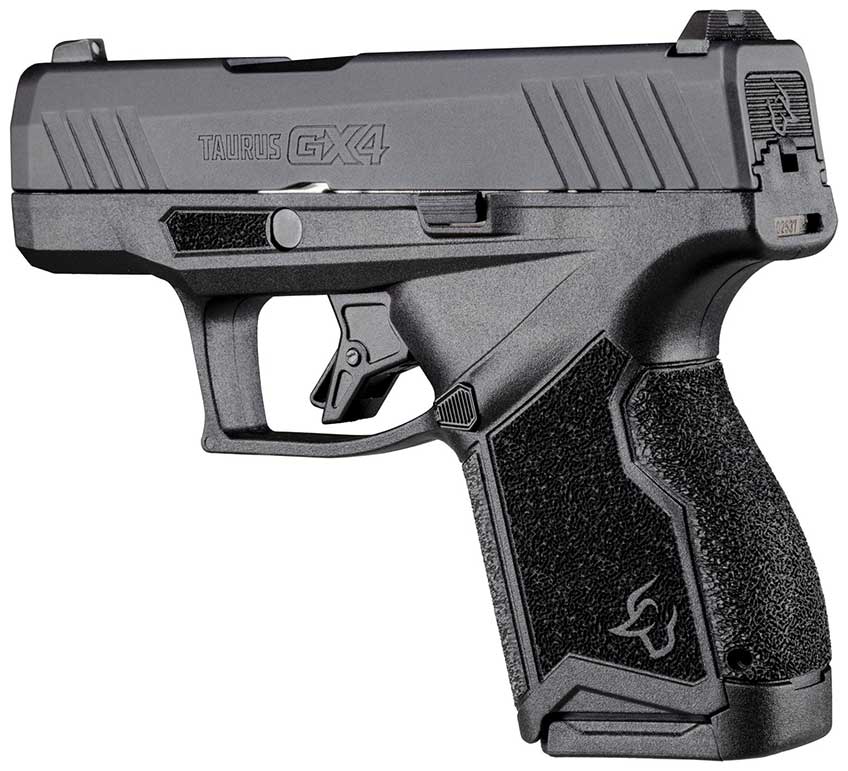 The carbon-steel slide is treated with a corrosion-resistant, matte-black, gas-nitride finish and has a flush fit to the polymer frame. According to a set of digital calipers, it’s just 0.98″ wide. The slide features canted front and rear cocking serrations that are effective for push or pull manipulations of the slide. The nose is rounded for easier re-holstering, while all of the other exterior edges are rounded or smoothed off for a sleek, no-snag profile. The ejection port is beveled at the rear for improved function and outfitted with an oversized extractor claw. The back of the slide sports a grooved polymer slide plate. 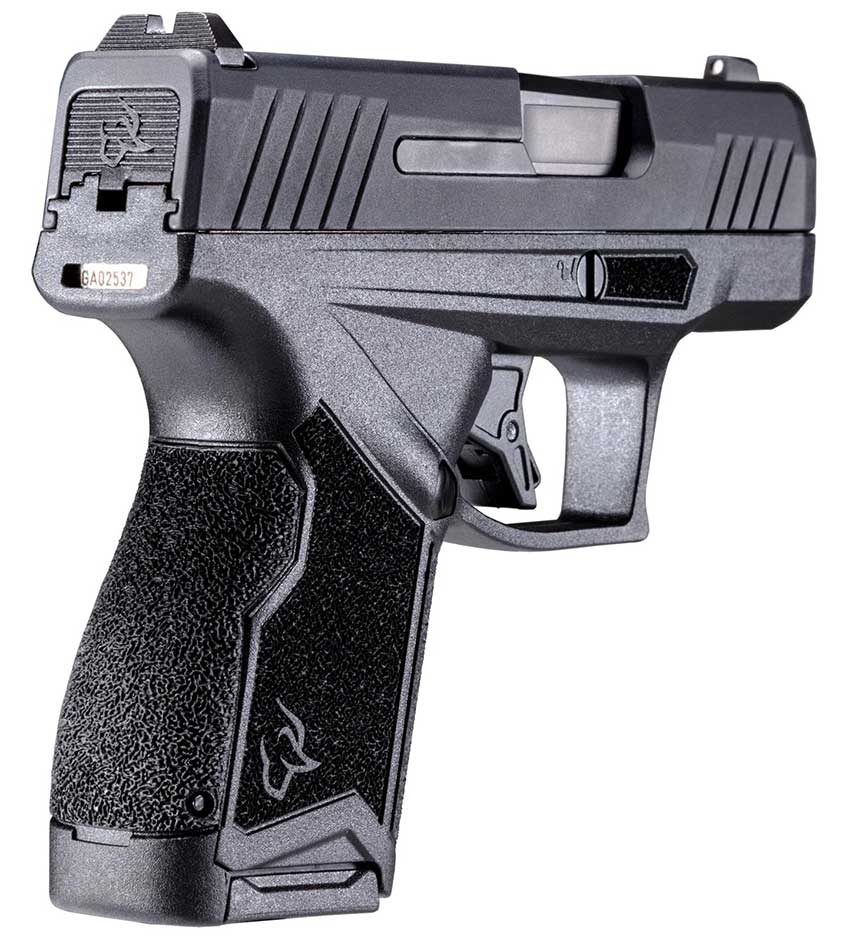 The sights have been upgraded from polymer to steel with a white dot sight up front and a drift-adjustable, serrated square notch sight at the rear. The slide cuts for the sight system are compatible with industry-standard Glock aftermarket sights. This makes it easy and affordable to trade out the factory sights for fiber optics or tritium night sights. 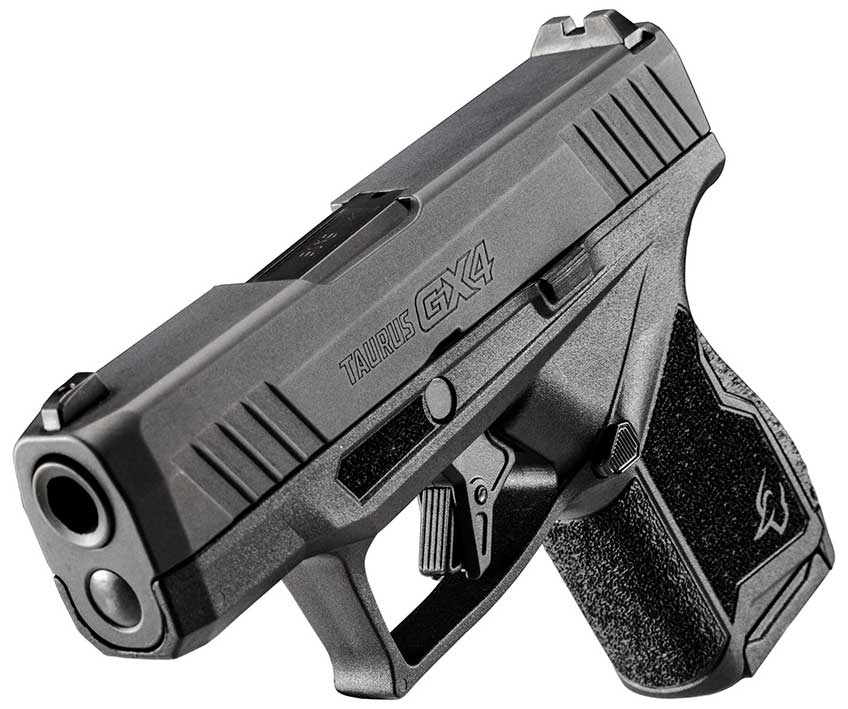 The 3.06″ barrel is treated with a satin-black diamond-like coating (DLC ) for increased wear resistance and added lubricity. It has a recessed crown and traditional land-and-groove rifling that can safely fire unjacketed lead bullets. At the top rear portion of the chamber is a witness hole that acts as a loaded chamber indicator. The dual-spring recoil assembly’s rod, sleeve and supports are all made of steel and capture one coil spring and a second flat-wire spring. 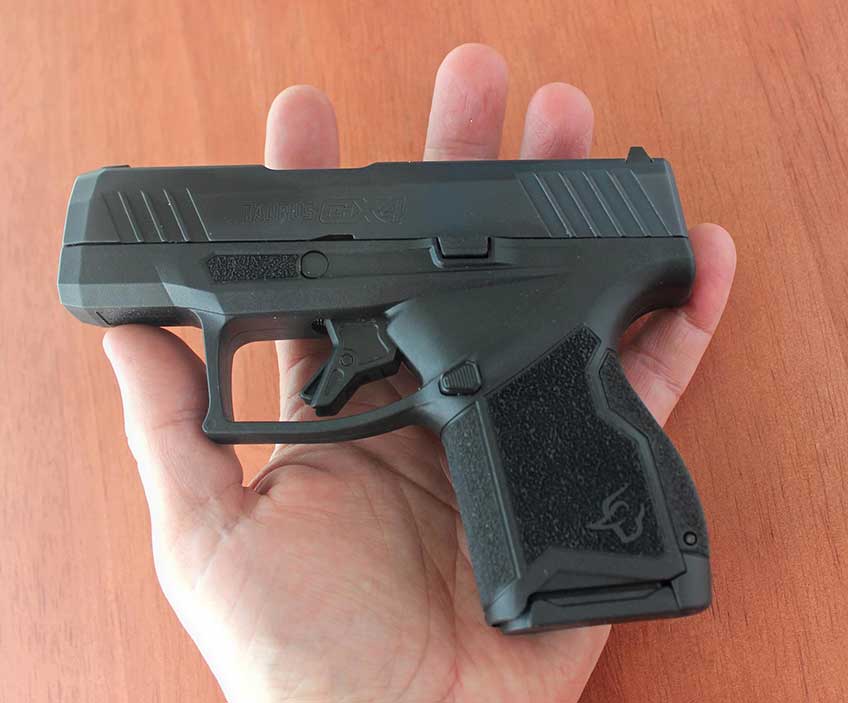 Inside of the polymer grip frame is a one-piece, stainless-steel chassis that strengthens the pistol and houses the fire control group. It is the serial-numbered ‘receiver’ for this pistol with the complete serial number visible though a port in the frame just below the slide plate. The chassis is topped with two 3.45″ long rails that provide more support for the slide assembly than the typical four short rails common to striker-fired polymer guns. The right rail is uninterrupted, while the left rail has a 0.50” gap to accommodate the ejector. The slide-to-rail fit was nice and smooth right out of the box. 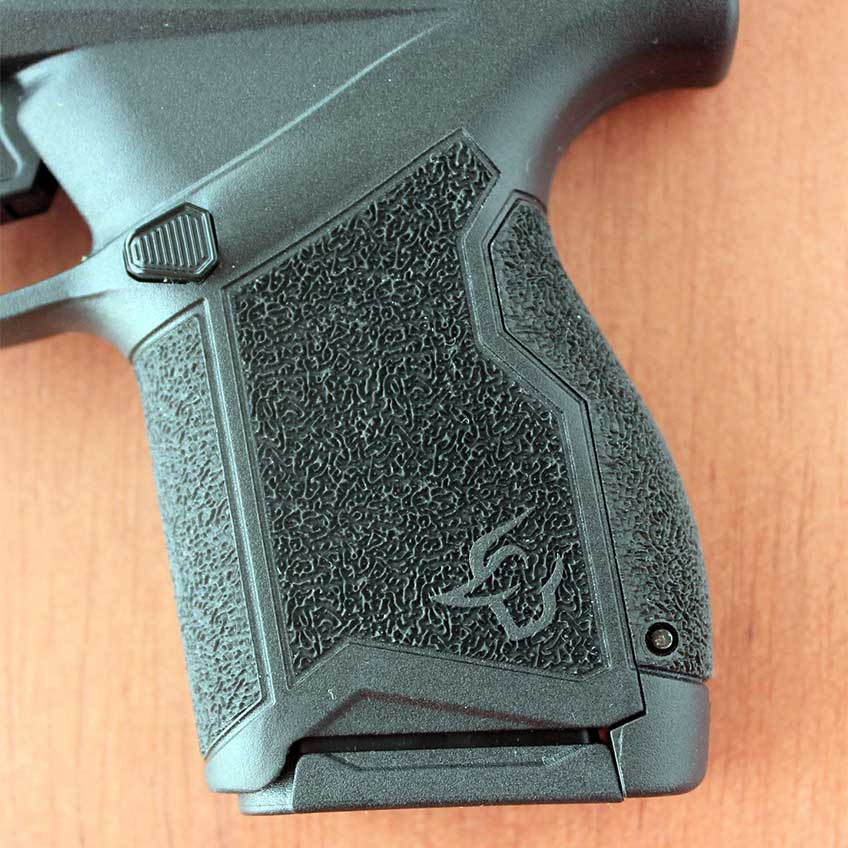 The polymer frame is matte black, which matches the finish on the slide and barrel. The dust cover is beveled to match the nose of slide and does not have an accessory rail. Above the trigger guard are textured indentations that provide an intuitive trigger-finger rest just in front of the takedown pin. The trigger guard has a flat front edge to act as a finger rest, with a recess where it meets the grip. The polymer single-action trigger is an angled, flat-faced configuration with a wide, grooved central safety lever. This gun does not have the restrike feature of the G3 series. 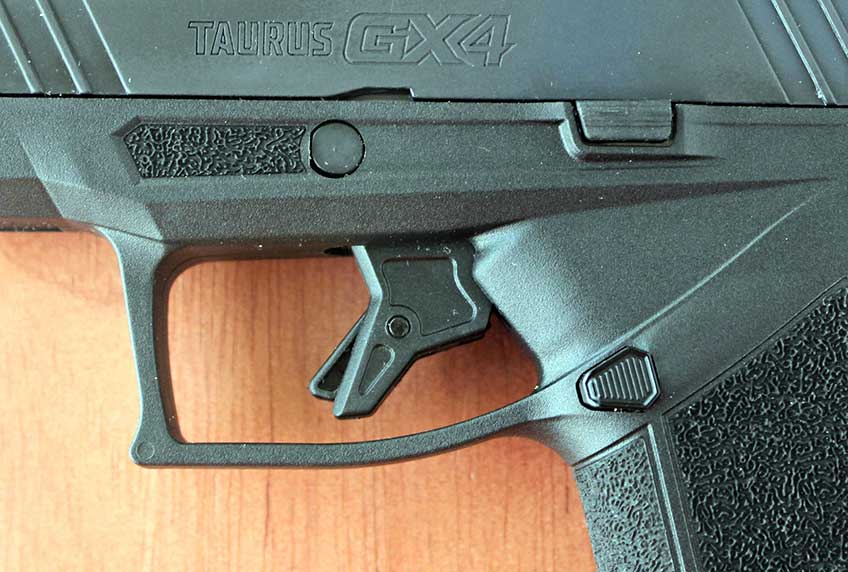 The trigger pull of the gun I worked with will sound heavy at 6-lbs. 9-oz., according to a Lyman digital trigger gauge. But the weight alone doesn’t describe the positive characteristics of the trigger. It has a light, smooth take-up before a firm, distinct stop. The trigger breaks cleanly and swings back just 0.25″ to complete the trigger stroke. The trigger reset is distinctive with an audible click. I found it to be a real pleasure to work.

The remaining external controls consist of a low-profile, overmolded polymer slide stop on the left side of the frame, along with the reversible polymer magazine release button. A raised ridge behind the magazine release gives it a flush-fit feel that works to protect against unintentional bumps. 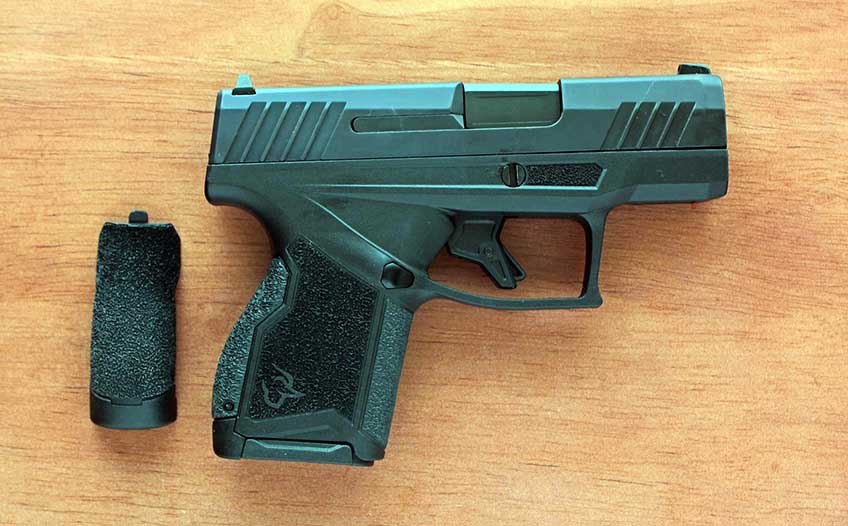 The grip frame features wraparound stippled grip texturing. The backstrap can be removed from the grip by tapping out a retention pin at the base of the grip. Two different backstraps are provided with the pistol. The grip’s front and backstrap have protective extensions to prevent the magazine’s polymer baseplate from pinching the shooting hand during quick reloads. The sides of the magazine well and the baseplates are indented to aid in manually stripping the magazine from the grip, should the need arise. This model does not have a magazine safety, which means the gun will fire if the trigger is pressed with the magazine removed from the grip. 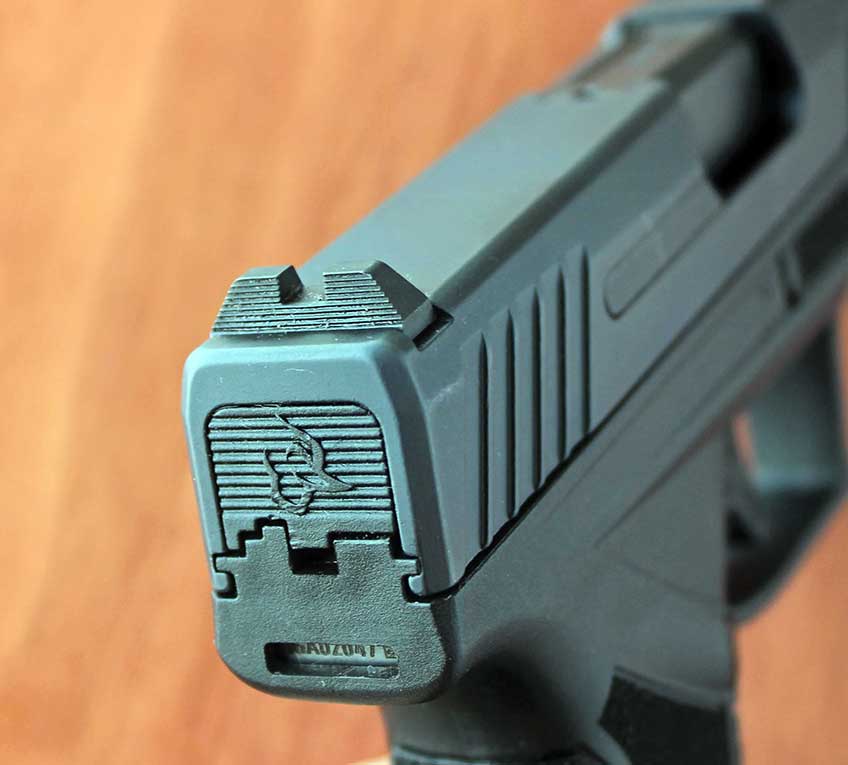 This pistol ships with a pair of blued-steel 11-round magazines that have flush-fit baseplates. Like other micro 9s, the GX4 magazines have a ‘bottle neck’ design. They transition from a single-stack profile at the top to a double-stack width further down. It’s a reliable design that allows for more rounds without bulking up the grip. Optional 11-round magazines with finger extensions will be made available for those who want them, along with extended 13-round magazines. 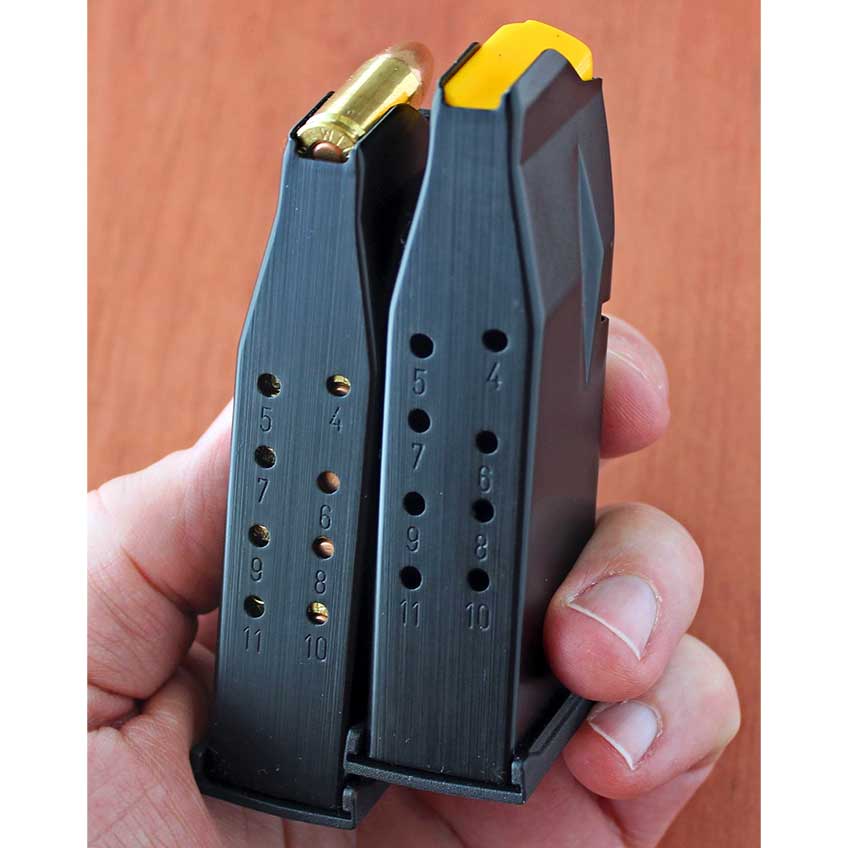 The procedure for breaking down the GX4 for cleaning is simple but slightly different, due to the configuration of the recessed takedown pin. In place of a swing down lever on the left side of the gun, this pin has a standard screwdriver slot on the right side of the frame. 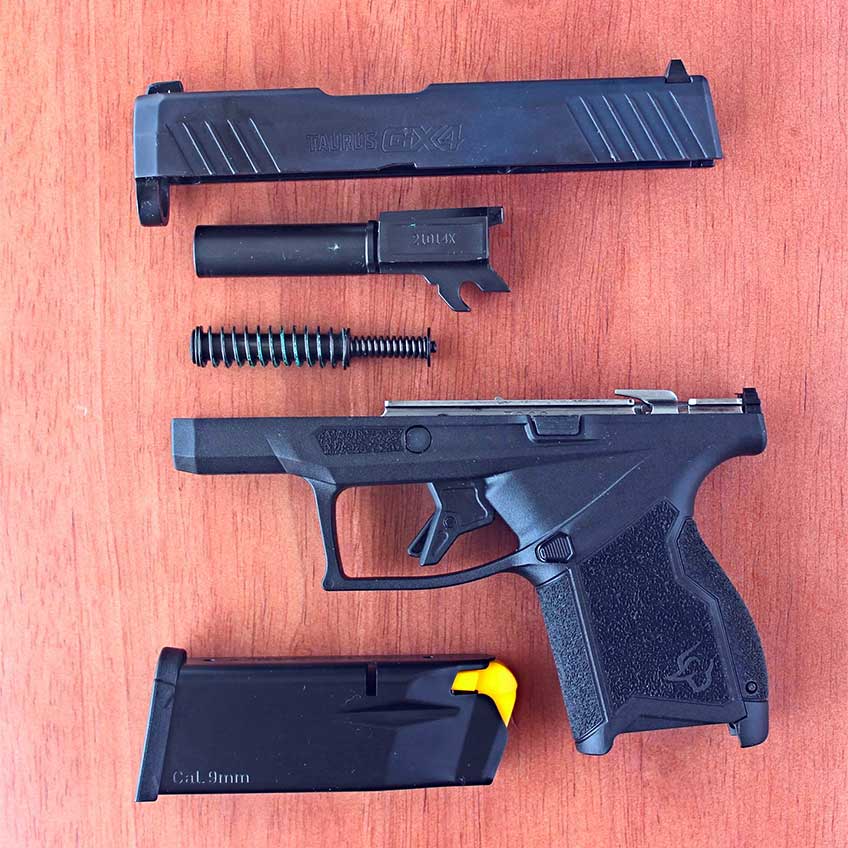 Start by removing the magazine and opening the action. Once you have verified that the pistol is completely unloaded, close the slide. While holding the grip, use a screwdriver to twist the takedown pin one quarter turn counter-clockwise. While holding the pin in this position, depress the trigger. This will release the slide so that it can be pressed forward off of the frame. Once the slide is free, remove the recoil assembly and barrel from the slide, and the parts are ready to clean. The takedown pin does not need to be twisted for reassembly. Simply press the slide group all the way back onto the frame, and it will lock into place. 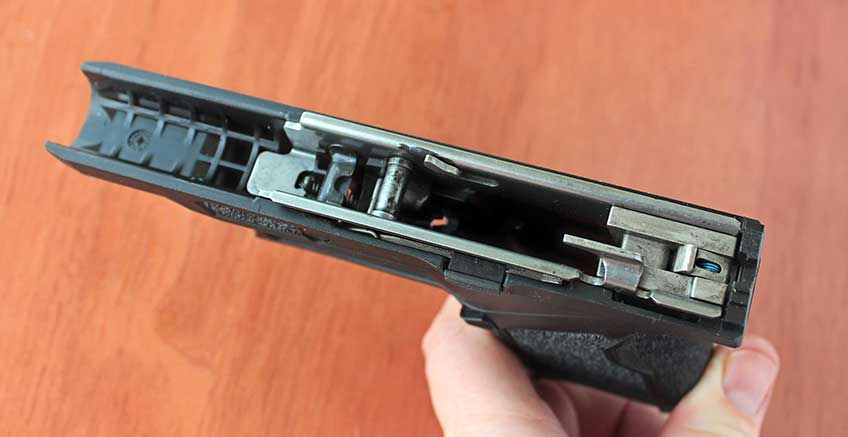 Perhaps the No. 1 challenge that comes with transitioning to smaller-size centerfire handguns is learning to manage the more intense levels of felt recoil they tend to produce. Single-stack 9 mm pocket pistols are well known for having a more snappy feel to them. Part of the reason for this reputation has to do with their relatively narrow grip shapes. A narrow backstrap can work like a splitting wedge to focus felt recoil into the tender web of the shooting hand’s thumb.

The Taurus team paid close attention to the ergonomics of the GX4’s grip profile in order to make it a more comfortable, usable fit. The GX4’s grip frame is as wide as the slide and properly contoured where it meets the web of the thumb. This greater surface area is paired with grip texturing that provides an effective amount of purchase without being abrasive. 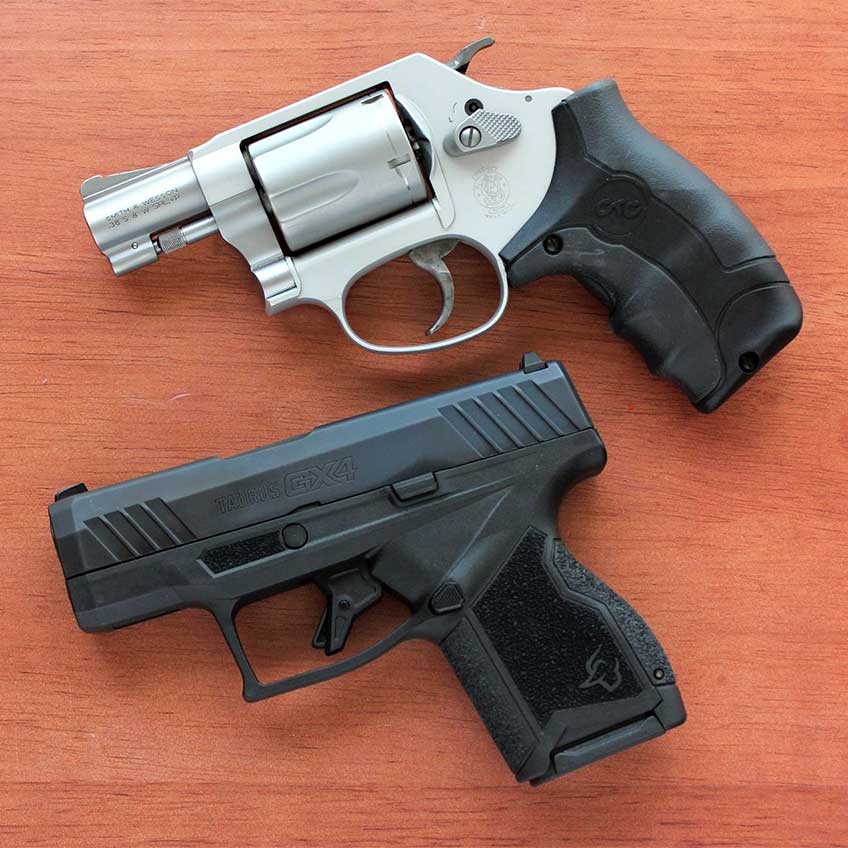 Whether or not the grip’s 1.75″ tall front strap and flush-fit magazine baseplate are long enough for you will depend on your hand shape. With my somewhat smaller hands, I was able to squeeze my little finger onto the grip just enough to form a three-finger grip. Folks with larger hands will probably prefer to work with an extended magazine. 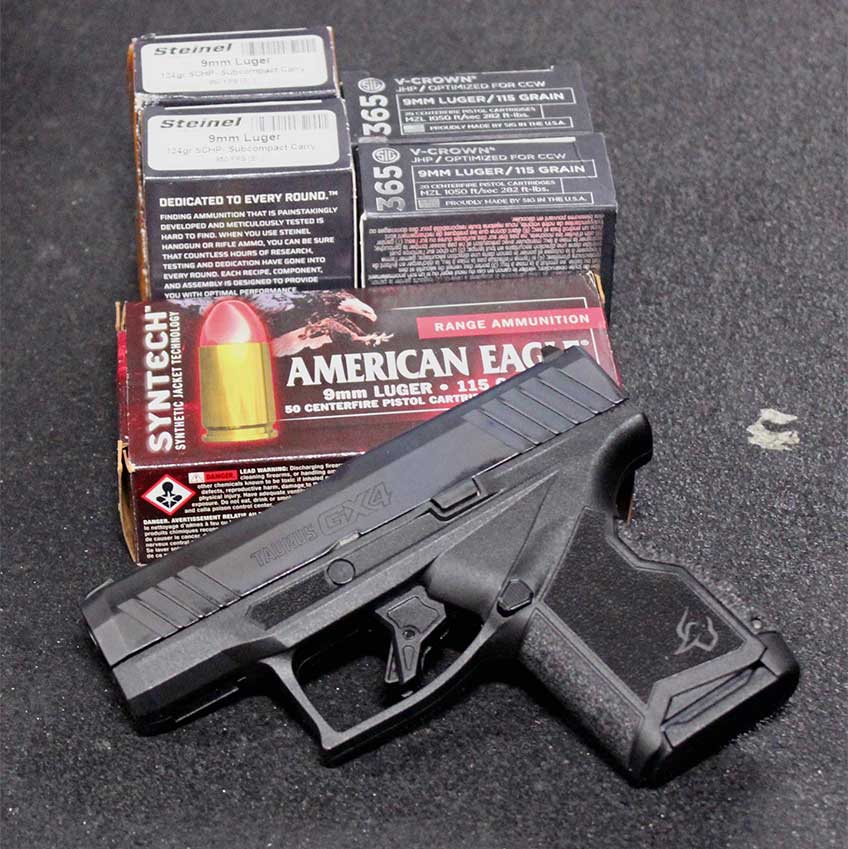 Ammunition selection will play a key role in recoil management with any micro 9, including the GX4. According to the owner’s manual, this model should not be fired using +P+ rated 9 mm ammunition at any time. Taurus pistols are rated for +P cartridges that meet SAAMI standard specifications. That being said, regular use of +P loads will wear out key components more quickly and produce increased levels of felt recoil. 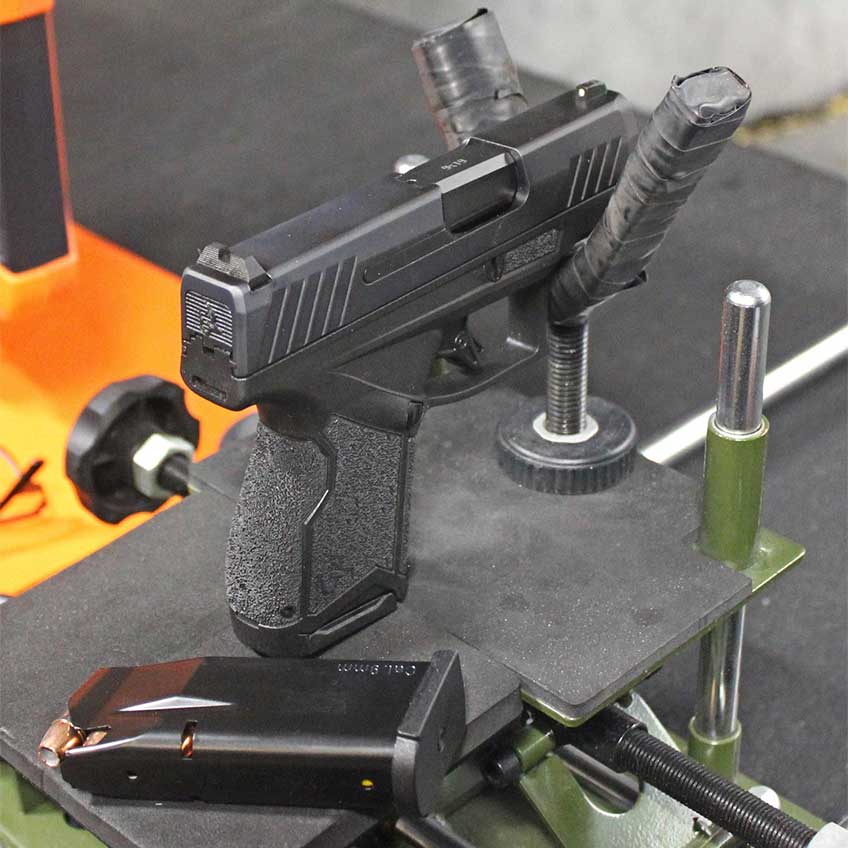 For informal and formal testing, the GX4 was fired using standard-pressure ammunition topped with typical bullet weights, along with defensive hollow-point loads tuned specifically for the shorter barrels of concealed-carry pistols. The standard loads generated relatively stout levels of felt recoil, while the short-barrel loads proved to be more moderate and easier to control.

The GX4 was utterly reliable with both of the provided 11-round magazines and all of the ammunition fired. There were no malfunctions throughout the course of testing. Formal benchrest accuracy testing was conducted at 7 yards using Federal Premium Syntech Range, SIG Sauer 365 V-Crown and Steinel Sub Compact Carry ammunition. The 5-shot group averages ranged from 1.61″ to 2.35″. A few informal 5-shot groups fired out at 15-yards produced groups that hovered around the 3.5″ mark.

Working with the new GX4 micro sub-compact 9 mm pistol was satisfying. It neatly succeeds in striking a useful balance of comfortable carry and ammunition capacity. Although it’s noticeably less expensive than the competition, it doesn’t look, feel or perform like a budget gun. Its clean construction, thoughtful design and comfortable grip make it a real contender in the micro sub-compact 9 mm marketplace.

Should you let your kids play with toy weapons? Sure, but keep them away from real…