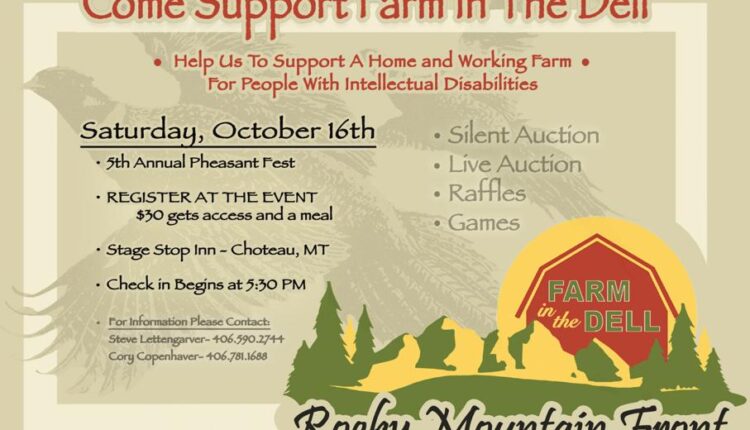 This weekend, Farm In The Dell Rocky Mountain Front (FIDRMF) is holding its 5th Annual Pheasant Festival to raise funds to build their Fairfield facility.

This bottle of Jack Daniels, which was bottled on the occasion of the Sturgis Black Hills Motorcycle Rally in 2002, is part of a “Southern Survival Kit” which will be auctioned on Saturday evening. The “kit” includes a box of Double Decker Moon Pies made in Chattanooga, Tennessee, and four pounds of Tripp Country Ham straight from the Brownsville, Tennessee smokehouse. Other “goodies” from the south are also included.

The event was canceled last year due to COVID. In 2019, the event grossed nearly $ 20,000, according to Steve Lettengarver, adding that the event is “getting more popular.”

When asked about the next step to get FIDRMF up and running in Teton County, Lettengarver told The Sun Times that the organization is in the process of raising funds to build a residence on the property south of Fairfield.

Funding is in place to build a 40 ‘X 40’ X 12 ‘barn and the contract to build the barn was signed last week with the contract awarded to MQS Barns.

A community garden is planned below.

Lettengarver said he gets an average of about one call a week from people reviewing progress.

This year’s Pheasant Festival takes place at the Stage Stop Inn, with catering from the Log Cabin restaurant by Choteau. DJ Mike provides entertainment and a block of rooms is reserved for those who do not want to go home after the event.

There is still time to donate items for the silent auction and live auction. Lettengarver said that “baskets are a big item”.

A donated basket is called a “Southern Survival Kit”. The basket includes a bottle of Jack Daniels Single Barrel Whiskey, which was bottled on the occasion of the Sturgis Black Hills Motorcycle Rally 2002. The bottle shows the barrel number and contains a medallion and the signature of the distiller. The Southern Survival Kit is rounded off with four pounds of Tripp Country Ham, straight from the smokehouse in Brownsville, Tennessee.

And to balance the fine whiskey and country ham, there is a 12-pack of Double Decker Moon Pies, straight from Chattanooga, Tennessee.

A few surprises round off the survival kit.

There will be a card draw for two items, a Ruger American 22-250 rifle and a Smith & Wesson 9mm pistol.

Walking on a “baord” will be half a beef and a gun safe.

Items can be dropped off at the Greenfields Irrigation District office in Fairfield.

A Wrenching Farewell: Bidding Adieu to My Primary Care Doctor After Nearly 30 Years

6 Months to Live or Die: How Long Should an Alcoholic Liver Disease Patient Wait for a Transplant?