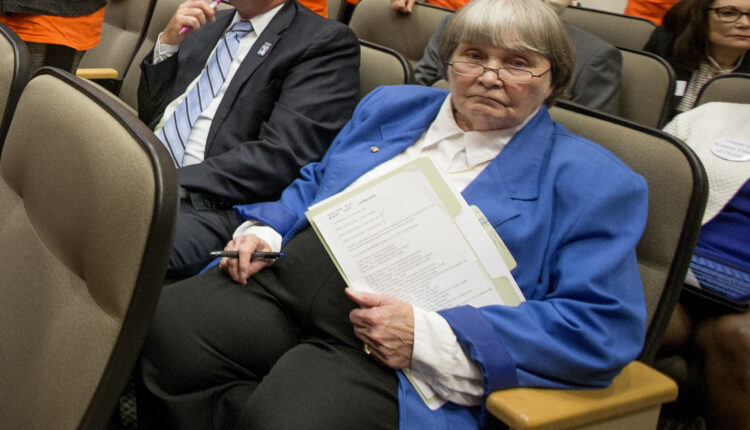 TTAG contributor Luis Valdes, in his role as Florida Director for Gun Owners of America, called on a so-called pro-gun Republican for blocking five of six major pro-gun laws in his leadership position in the Florida House of Representatives. As a result, Florida Carry spokesman Lee Williams wrote an attack article that United Sportsmen of Florida Executive Director Marion Hammer emailed to members of the USF, as well as to at least some members of the NRA in the Sunshine State. Hammer didn’t like the fact that one of her political friends, Rep. Cord Byrd, received legitimate criticism for blocking good gun laws, especially when gun lawmakers were overwhelmingly in Florida.

Here is an excerpt from Mr. Williams’ article published on his blog, The Gun Writer, and also on the SAF website.

… To be clear, Rep. Cord Byrd deserves our praise and thanks to all gun owners in the Gunshine State.

Byrd has proven that he can always be relied on to support our God-given and constitutional right to self-defense. He is a strong supporter of both the Second Amendment to the United States Constitution and Article I, Section 8 of the Florida Constitution, and has received an A + rating from the NRA.

When it comes to guns, Byrd has proven time and again that he’s one of us and not a RINO, and I’m pretty sure he bleeds Hoppe’s number 9 if he cuts himself while shaving.

Unfortunately, Luis Valdes, director of Gun Owners of America in Florida, was not affected.

For reasons known only to Valdes, he found Byrd guilty on Wednesday – and published an extremely insulting and naive statement on social media …

Aside from the personal attacks on Mr. Valdes, Williams appears to believe that all of this depends on one or more of these blocked bills not having an accompanying bill in the Florida Senate.

Personally, I’ve never met Valdes, even though we spoke on the phone a couple of times. It is important that he and other advocates who come before the legislature understand the legislative process, and Valdes’ ignorant contribution proves that he does not understand the process. Worse still, he has done gun owners a disservice by attacking a trusted lawmaker – a true friend of ours – who is campaigning for the Second Amendment.

In my opinion, Valdes has to think that by attacking lawmakers who are proven to work on behalf of gun owners, he is somehow gaining credibility. In fact, it just proves that he doesn’t deserve the gun owners’ trust or the ability to speak on their behalf.

Valdes needs to understand that the committee’s limited time cannot be used on bills that have no chance of being passed. This also includes bills that have no companion in the other chamber. The legislature must find a sponsor in the other chamber. If they can’t or can’t, it is their failure to blame, not a committee chairman who is responsible for ensuring that bills of other members who have done their homework are heard.

Read Williams’ full post here. What he doesn’t say, however, is that many bills get through the committee with no accompanying legislation.

Rep. Byrd said there was no “companion” in the Senate for these bills and it would be a waste of time.

But that was just a ruse, as he put OTHER bills to the vote even if they had no Senate comrades. Https://t.co/FTvycZ9ihz pic.twitter.com/2MyOiYVytu

A legal warning from the Florida Chapter of Gun Owners of America stated just that earlier this year:

But to be honest. We’re a little annoyed with Rep. Byrd. Why? Because already on March 17th, Rep. Byrd said that as chairman of the subcommittee on criminal justice and public security of the House of Representatives he will not bring HB 123 (Constitutional Carry) to a vote in his committee because he has no Senate attendant bill.

But Governor Ron DeSantis’ favorite project, the Anti-Riot Bill (HB 1), had no accompanying Senate bill, and yet Rep. Byrd put it to the vote on his committee. In fact, Byrd’s committee was the first to pass HB 1. And guess what happened? HB 1 consisted of Rep. Byrd’s committee and everyone else in the House and Senate.

Hammer shared her thoughts with Williams. Again from Williams’ piece:

“When groups and faction spokesmen who do not understand the legislative process attack the legislature and committee chairs that support the Second Amendment, they shoot themselves in the foot and do a great disservice to law-abiding gun owners,” said Marion Hammer, former president of the National Rifle Association, current NRA board member and executive director of the Unified Sportsmen of Florida.

For one of Wayne LaPierre’s well-paid pals who only spends a few days in the Florida Parliament, these are some pretty ugly claims. So why all the harsh words from Williams? And why did Hammer Williams’ article circulate to tens of thousands of USF and NRA members?

We suspect that GOA will share some findings soon.

[ED: A full response from Gun Owners of America is posted here.]

Man admits dating a friend who had gun and bullets