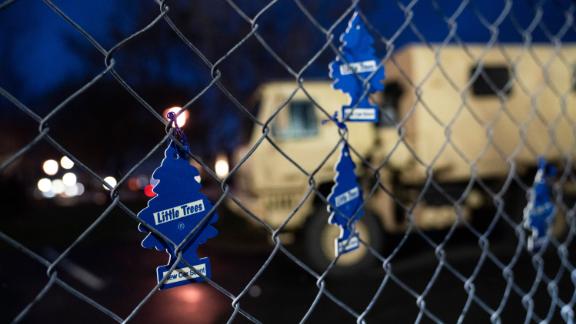 As protesters rallied for the fourth year in a row in the Minneapolis suburb of Brooklyn Center to protest the fatal shooting at Daunte Wright, there was a noticeable relaxation in his death hours after a former police officer was arrested and charged, according to police officers.

Former officer Kim Potter will appear in court for the first time on Thursday.

“My message to everyone who wants justice for (Daunte Wright) and his family is: Your voices have been heard, now the eyes of the world are watching the Brooklyn Center, and I urge you to protest peacefully and nonviolently,” Brooklyn said The center’s mayor, Mike Elliott, said on Wednesday.

Potter was arrested Wednesday and charged with second degree manslaughter in the death of 20-year-old Wright. Officials stopped Wright’s car on Sunday and body camera footage showed Potter drew her gun as she called “Taser” and shot Wright.

Potter, who resigned as a Brooklyn Center police officer this week, posted bail and has been released from custody, according to the Hennepin County Sheriff’s official website. CNN has approached Potter’s attorney, Earl Gray, for comment.

Wright’s family had brought charges against the officer, and when the trial of a former officer for the death of George Floyd was just ten miles away, hundreds gathered for four consecutive days to protest Wright’s death.

However, after three nights of sometimes violent exchanges between demonstrators and police officers, the tension seemed to have relaxed by Wednesday evening.

“We’re grateful tonight, the tension and anxiety and stress seemed to be easing,” said Matt Langer, chief executive of the Minnesota State Patrol, at a press conference that night.

There were “about 24 arrests,” he said, which was significantly lower than in previous nights.

Hennepin County Sheriff David Hutchinson said the majority of those arrested at the Brooklyn Center are not residents of the city.

And for the second straight night, there were no reports of looting or fires at the Brooklyn Center, said John Harrington, Minnesota public safety officer.

Police Chief Tim Gannon, who resigned Tuesday, had said Wright’s death was the result of Potter mistaking her gun for her taser when Wright resisted arrest.

However, the Minnesota Bureau of Criminal Apprehension examined Potter’s service belt and found that her pistol is on the right side of her belt while the taser is on the left. This comes from a press release from Washington County attorney Pete Orput.

Citing a criminal complaint, the press release said the taser was yellow with a black handle and in an upright position, “which means Potter would have to use her left hand to pull the taser out of its holster.”

Despite Potter filing a letter of resignation, Mayor Elliott said Tuesday he did not accept it, adding, “We are running our internal process to make sure we are accountable for the steps we need to take.” Previously, he told CBS he thought Potter should be fired.

Potter will still be eligible for benefits after her resignation, although it is not clear what the benefits are, said incumbent city administrator Reggie Edwards.

“This (shooting) was not an accident. This was a deliberate, deliberate and unlawful use of force,” Crumps said.

What the body cameras showed

Wright’s assassination on Sunday marks at least the third high-profile death of a black man during a police encounter in the Minneapolis area in the past five years, following the shooting of Philando Castile in Falcon Heights in 2016 and the death of George Floyd last year. The Minneapolis Police Department was also investigated when an officer was convicted of murder and third degree manslaughter for the fatal shooting of Justine Ruszczyk, a white woman, in 2017.

Body camera footage of the incident was released on Monday, one day after Wright’s death. Wright was pulled by police on Sunday, who learned that he had a warrant to arrest him on a gross gun misconduct charge, according to a press release from Orput’s office.

The footage shows Wright standing in front of his vehicle, arms behind his back, and an officer right behind him trying to handcuff him. An officer tells Wright “not” before Wright turns away and sits back in the driver’s seat of the car.

Orput’s office said Potter “drew her 9mm Glock pistol with his right hand and pointed it at Wright.”

The officer whose camera footage was released warns the man she will use against him with her taser before repeating “Taser! Taser! Taser!” Calls. At this point, Orput’s office says Potter “pulled the trigger on her pistol” and shot one round at Wright’s left side.

“Wright immediately said, ‘Ah, he shot me,’ and the car sped a short distance before hitting another vehicle and stopping,” the press release said.

Then you can hear the officer shouting, “Holy shit! I just shot him.”

An ambulance was called and Wright was pronounced dead at the scene, according to Orput’s release.

Gannon said the portion of body-worn camera footage released Monday led him to believe the shooting was accidental and that the officer’s actions prior to the shooting coincided with the training of the Taser division.