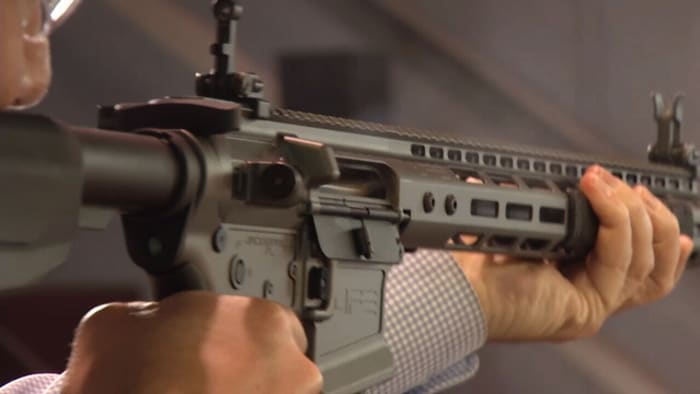 JACKSONVILLE, Fla. – Three weeks after the tragic school shooting at Marjory Stoneman Douglas High School in Parkland, Florida, the gun debate is getting more heated than ever.

Florida Gov. Rick Scott and other lawmakers across the country have called for a ban on what they call “assault rifles” like the AR-15. But those against the ban say the guns themselves aren’t to blame; it’s the people.

An AR-15, which the National Rifle Association calls America’s most popular firearm, has been used in some of the most deadly mass shooting across the country in recent years. With so much controversy regarding the rifle. We wanted to know exactly how it works, and find out about the AR-15’s intended purpose. News4Jax went inside the Jacksonville company that makes the AR-15 to learn more.

Joint Force Enterprises in Jacksonville manufactures the AR-15 as well as other high-end rifles.

Co-owner Elvis Rey is a US Air Force veteran who worked with security forces and then went on to work as a government contractor. He’s also a gun safety instructor.

With Rey’s guidance, we fired the semi-automatic AR-15. The gun seemed powerful and precise.

Rey also showed us a firearm with a high-regulated suppressor, which some people call a silencer.

“As you’re going to see, it’s not like Hollywood-style where you don’t hear anything,” Rey said.

The suppressor made it quieter and muffled, but it was far from silent.

To compare different firearms, Rey had us fire a semi-automatic 9 millimeter Glock handgun. In the same matter of time, we were able to fire approximately the same amount of ammunition as the AR-15.

“Their triggers work the same way,” Rey explained about the Glock handgun versus the AR-15. “As fast as you can pull your trigger is as fast as the rounds will go out. You were shooting fast, you were shooting slow, but with the rifle, because of the longer barrel, obviously it is going to be a lot easier and more accurate.”

According to the National Shooting Sports Foundation, or NSSF:

Advocates say it’s the modern sporting rifle used for competitive target shooting, and its accuracy and reliability make it popular for hunting.

Vic Micolucci: “Is this one of these deadlier than the other in your opinion?”
Ray: “Absolutely not. They both can kill a person.”

Will Bright is a long-time sports shooter and co-owner of Joint Forces Enterprises with Rey.

WATCH: Extended interview with Will Bright

Bright: “A weapon as a weapon, if it is in the wrong hands, if it’s used incorrectly.”
Vic: “We keep hearing this again and again, will. The AR-15 is the weapon of choice in these mass shootings. Do you have any reason as to why?”
Bright: “The only thing that I can say is there are many other platforms that do the exact same thing. The AR-15 just happened to look different and aggressive and unfortunately people have grabbed onto that concept.”

Both Bright and Rey said they follow all the rules and regulations, and will always turn away someone who doesn’t fit the criteria of a responsible gun owner.

“We go by the book for everything,” said Bright.

As gun makers, the two said they do wish they had more access to mental health records and do want the laws strengthened when it comes to who can pass a background check. They also said they believe better security and training will make schools and public places safer.

“Yes, it is our second amendment right to be able to carry one of these with us,” said Rey. “Should there be a stricter policy? Absolutely. I think that we can polish up some of the laws and regulations.”

The gun debate is nothing new, but some lawmakers are specifically targeting the AR-15 as it has been used in some of the most deadly mass shootings across the country. These shootings include:

Proposed gun reform laws have been in the spotlight at both the state and federal level following the Parkland school shooting Feb. 14th.

In the Florida legislature, two high-profile bills have been debated in the final days of the legislative session:

At the federal level, a number of bills aimed at gun reform or school security have been introduced since the Parkland shooting, and other bills previously introduced have been getting added attention:

As the gun debate continues, companies are coming forward with products to keep students safer.

The company’s president said the door is designed specifically for classrooms and during a test, the door stopped ammunition from an AR-15, a shotgun, 9 millimeter pistol and an FN SCAR 17.

Another product promising to help keep students safe from gunfire is a bulletproof backpack. Many companies are making them, including Guard Dog Security based in Sanford, Florida.

The GHI’s 100 top products on test