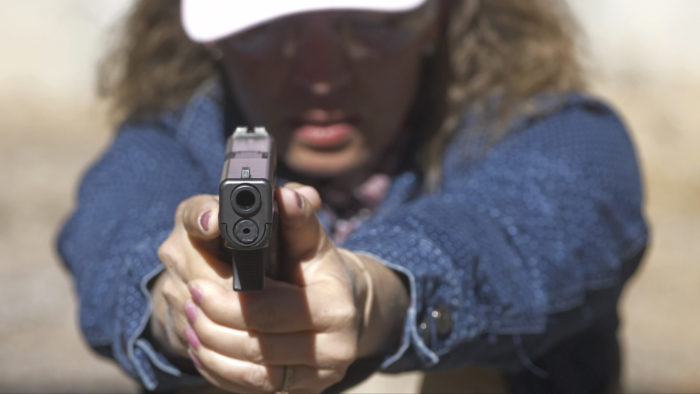 This Saturday, June 29, 2019 photo, Cindy Bullock, Secretary of the Timpanogos Academy, is participating in target practice at the rifle range of the Utah Sheriff’s Office during Teachers Academy’s training in Spanish Fork Canyon, Utah. About 30 teachers in Utah spend their summers learning how to fill wounds and shoot guns as part of a class held by the police to prepare educators for an active shooting scenario in their schools. (AP Photo / Rick Bowmer)

Wait … we’ve been told by all of the brightest people that teachers and other school workers who carry firearms are inherently dangerous and irresponsible. You have assured us that the concept of a good guy with a gun is nothing more than gun lobby propaganda and is never reflected in real life.

An armed school worker foiled an abduction Tuesday after striking a man in a playground with his gun, according to police.

The situation began at around 2:30 p.m. at an unidentified elementary school in Ogden.

Ira Cox-Berry, 41, approached and grabbed a schoolgirl, an 11-year-old girl who was playing in the playground, police said. Cox-Berry reportedly pulled the girl away as if trying to go with her, but a school employee approached Cox-Berry and told him to leave school.

The unknown teacher stopped the kidnapping and drove the rest of the children into a classroom. But Cox-Berry was clearly determined to get a kid.

Cox-Berry then approached the building and smashed a window obviously trying to get inside, police said. The agent then pulled out a gun and stopped the man while he called the emergency number.

Officials arrived shortly thereafter and took Cox-Berry into custody after a brief fight, according to a statement from Ogden Police.

According to the report, the unidentified “school worker” had a concealed carry and was “lawfully in possession of the weapon.” Translation: He was authorized to wear it around school to protect the students.

Hm. It’s almost as if all the predictable incitement of the usual suspects against arming teachers and others in schools was really just a bunch of hopphobic hysteria aimed at demonizing the use of guns and delegitimizing armed self-defense.