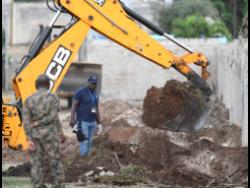 Even as the hierarchy of Jamaica’s police force has cited mounting gun seizures at the Stadium East field in St Andrew as evidence of incremental gains, security chiefs consulted with Cabinet on a response to an avalanche of murders.

Killings have surged more than 19 per cent in the first 22 days of the new year, with 111 people murdered –18 more than the comparative number recorded over the corresponding period in 2021.

Monday’s revelation by the Office of the Prime Minister of Cabinet consultations with Major General Antony Anderson, the police commissioner, and newly installed army chief, Rear Admiral Antonette Wemyss Gorman, was a rare disclosure but may have been telegraphed to signal an emboldening of the Holness administration to push back at opposition resistance of much-disputed states of emergency (SOEs).

Deputy Commissioner Fitz Bailey, who helms the crime and security portfolio, said the gun find was part of the pushback against the underworld operating in St Andrew.

Tuesday’s excavation of the periphery of the athletics and football field brought to eight the total number of firearms found within the last 48 hours following operations that started around 2:30 pm on Sunday.

Among the cache found on Sunday were a high-powered AK-47 rifle, a shotgun, an Uzi submachine gun, and 53 assorted rounds of ammunition. Those illegal firearms were found near the Nannyville side of the field.

On Monday, an AK-47 and M16 rifles, magazines and 60 5.56 cartridges were among the illegal ammunition and weapons found.

“The operation continues and we believe there might be other weapons being concealed in this space. What we are faced with as a society is not a normal situation,” Bailey said on Monday.

“These persons, when they do have firearms, they are not scared to fire and they continue to fire their guns with impunity, and I want to say, as the commissioner has said, and the High Command has stated, ‘We are going to push back.’”

Bailey said that there were a number of plans in the pipeline which he could not disclose but pledged to “pull back Jamaica from the hands of these criminal elements”.

Just this month, at least 17 guns have been seized along the Mountain Avenue stretch which straddles the Kingston Eastern and St Andrew Central police divisions.

But even as the police make progress, they are aware that they are in a war of attrition, with at least 2,400 illegal firearms estimated to be smuggled in annually through airports and seaports, as well as through the more than 140 informal ports of entry.

Anderson, who was on the ground during the two-day operation, said the gun seizures were the result of police intelligence.

Slamming public criticism that “officers are demoralized and they’re not doing the work”, the commissioner credited law enforcers for making the seizures.

“The truth of the matter is, our officers have challenges. They’re significant challenges and we could enumerate all of them, but to suggest that because they are facing the challenges, that they’re going drop hands and not do the work, that’s it what I see on the road, and that is not consistent with the JCF I lead,” Anderson said.

The gun recovery at Stadium East was led by a team spanning the Counter-Terrorism and Organized Crime Investigation Branch, the Specialized Operations Branch and the Canine Division, along with members of the Jamaica Defense Force.

SOME OTHER GUN SEIZURES THIS MONTH:

January 21: Two illegal firearms – a .380 pistol and Magnum revolver, along with several rounds of ammunition – were seized at Portmore, St Catherine, from a man who is the person of interest in a recent murder and several criminal activities.

January 18: A man was arrested in relation to the seizure of a Taurus 9mm pistol along with twelve 9mm rounds on White Road, Hayes, in Clarendon.

January 16: Lawmen seized an AK-47 assault rifle with a magazine containing three 7.62 rounds at Orange Bay Road, Hanover. No one was arrested in connection with that seizure.

January 14: Nine illegal firearms, a quantity of ammunition, and military paraphernalia were seized in the Jarrett Lane section of Mountain View and one man taken into custody.