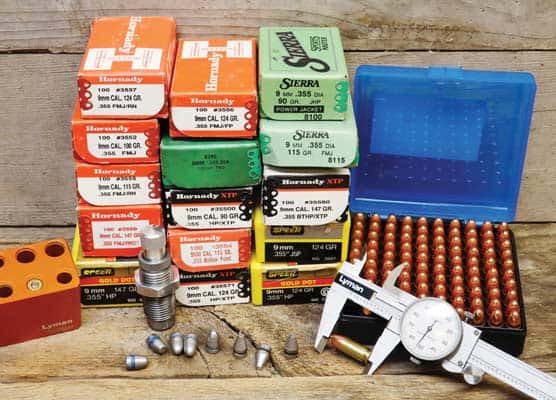 The revolver was King in this country and then things started to happen in the early 1980s. First, GLOCK introduced their then revolutionary polymer pistol and in 1985 the military dropped the .45 ACP Model 1911 in favor of the Beretta 9mm. These were followed by more and more improved ammunition and today the 9mm is the most popular semi-automatic pistol not just here but around the world. Virtually every manufacturer offers a 9mm semi-automatic pistol with many of them offering almost endless versions of polymer pistols, as well as 9mm on the 1911 platform. Two things have made the 9mm very popular — the widespread proliferation of very reasonably priced ammunition and the easy-to-handle felt recoil.

Before the “shortage” of 9mm ammunition, it was not unusual to find a box of 50 rounds selling for $10 or less, making it the only ammunition that was cheaper to buy than to reload. Over the years I simply tossed all my empty brass into 5-gallon buckets and whenever I found myself in a situation where virtually no ammunition could be found, I went back to reloading 9mms.

First it was necessary to sort all the brass by head stamps. Well, maybe it isn’t necessary, however, I feel better when I do it and spent two days sorting brass, finding 14 different head stamps and about 7,000+ empties.

Normally, I use the RCBS Pro-2000 Progressive Press to re-size, de-prime, re-prime and expand the case mouth. This gives me a large supply of brass to load in the amounts preferred on the RCBS RockChucker Single Stage Press. The re-sizing effort is greatly reduced by using the Lee Tungsten Carbide Sizing Die along with spraying the brass first with Hornady One-Shot Spray Lube. This waxed-based lube does not contaminate primers or powder and I have also found it handy for lubricating the priming punch. I do not expand the case mouth but rather just kiss the mouth with the Lee Universal Expanding Die to allow the bullet to enter the case. This helps provide a tight bullet-to-brass fit. Once the cases have been given the proper charge of powder, bullets are seated but not crimped. Revolver reloads receive a heavy roll crimp as the bullet is seated, however, this does not work with semi-automatic pistol rounds as they headspace on the case mouth. This requires a special taper crimp which is accomplished in a separate step by using the Lee Factory Crimp Die. Although it means an extra step in reloading, I have found it well worth the effort. Combined with the tight bullet-to-brass fit, there is no problem with bullets being shoved into the case during the path from magazine to chamber.