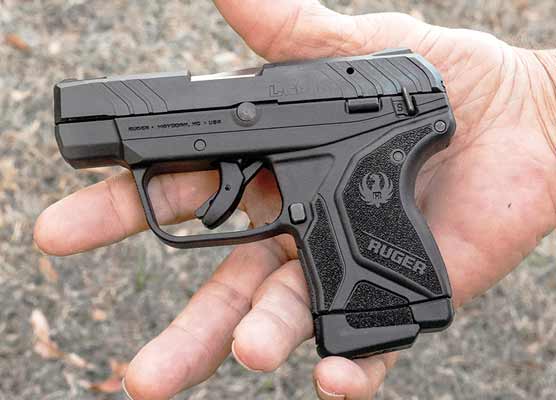 I don’t see a .22 pistol as a defense gun, but do some and I was curious to see how it would perform on a 4- to 15-yard “backup” qualification course. The sun was almost below the horizon when I started and since the little pistol doesn’t have night sights, I brought my SUV to the back of the range and did 36 of the 60 shots while lighting up the target with headlights.

I drew from one pocket and reloaded from another. With itty-bitty magazines and a short butt, reloading was not fast. The mag release button is easy for a southpaw to reach and not hard for us rights but the ejecting magazine kept hanging up on the heel of the firing hand. Pulling it out with the support hand was more positive. The slide stop worked very well as a slide release lever, making for a faster reload than racking the slide.

Knowing there was a strong possibility of misfires with the Federal Auto Match ammo I used, I loaded full magazines despite the six-shot strings — as expected, I had two misfires. With the Lite Rack feature, it was easy to manipulate the slide, chamber another round and get my shots in within the time limit on each occasion. By the 10-yard line, though, I had switched to the Mini-Mag ammo and there were no further problems.

The qual target revealed a group 5-1/2″ high, narrower for windage and well within the roughly 6×11″ “down zero” zone of the IPSC silhouette for a score of 300/300. Not bad, especially under the circumstances.