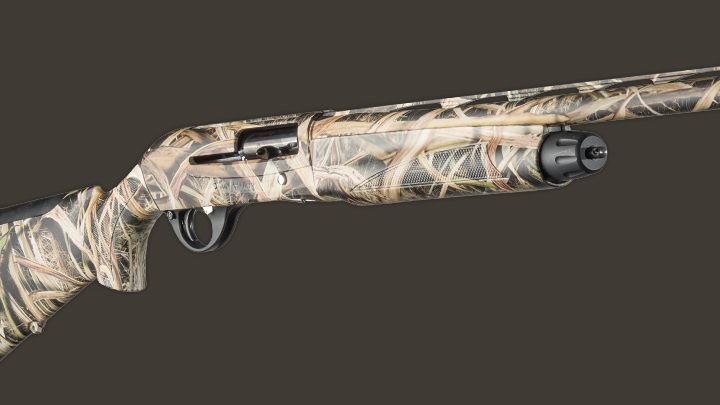 Roy Weatherby started his gun company in 1945 and headquartered it in the most hip and happening place in this country—California. As World War II wounded down and America emerged with big dreams and big ideas, Weatherby fed the dreams with high-performance firearms and a marketing strategy that utilized the glamor of Southern California.

Sadly, California changed. It’s no longer friendly to hunting or guns. The Weatherby company stuck it out there for longer than they probably should have. Finally Adam Weatherby, Roy’s grandson, decided to shut it down and move operations to Sheridan, Wyo. The first product introduced from the new Wyoming headquarters was a shotgun, the 18i, which is also Weatherby’s first 3½-inch 12-gauge shotgun.

Weatherby doesn’t make his own shotguns, but rather contracts with top manufacturers around the world. For some time Weatherby shotguns were made in Japan or Italy. In recent years they have been coming from Turkey. Weatherby returned to Italy for the 18i, an inertia-operated shotgun made by an Italian company called Marocchi.

Most semi-auto shotguns sold in America are gas-operated. They have a port in the barrel that bleeds off a little gas from the fired shotshell and uses that gas to operate the shotgun. Gas guns are very popular and have proven themselves to be reliable. Except gas carries with it debris from the burning powder, which builds up carbon deposits in the action. If the gun is not cleaned regularly, the deposits will eventually cause problems. Gas guns also tend to lack versatility and are often designed for a specific range of shotshell power levels.

The inertia operating system uses a weight, a spring and the simple physics of Newton’s first law of motion. It states in part, “An object at rest will tend to stay at rest.” 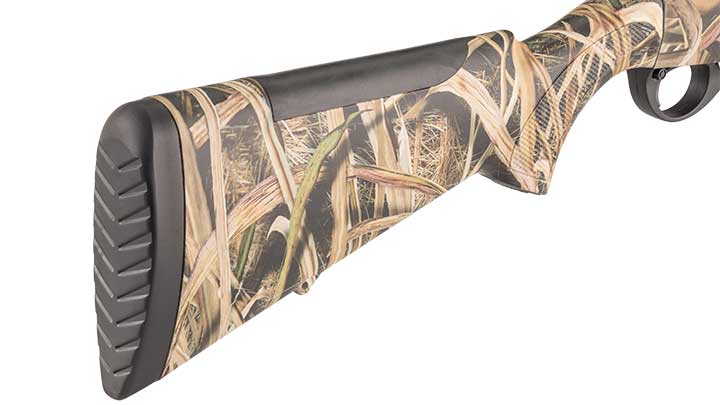 When the gun is fired the weight tries to stay at rest while the shotgun is recoiling. This loads the spring with energy and the energy operates the action. It’s that simple—at least in theory. As a lot of American shotgun engineers discovered, it’s difficult to put that theory into operation in a reliable shotgun. Still, when it works there are tremendous advantages to the system.

The upside of an inertia-operated gun is that all the trash and ash generated by burning propellant is ejected out of the muzzle. None of it travels throughout the operating system to gum it up. That’s one big reason why inertia-driven shotguns have developed a reputation for reliability during high-volume wing-shooting events and why they also became a favorite for ammo-inhaling shooting competitions like 3 gun.

Another advantage of inertia-operated shotguns is that a well-engineered firearm will usually accept a wide range of ammo and still operate reliably. So, that was one of the first things I checked out with this Weatherby.

First I tested it on static steel targets to be sure its point of aim and point of impact were the same. Then my son, Nathan, and I spent quite a bit of time busting clay targets. Keep in mind, this is a 3½-inch chambered shotgun designed to use magnum shotshells. We started with a bunch of different magnum steel ammo loads. That includes Kent Faststeel 2.0 and some Remington Hypersonic Steel loads. As expected, the 18i functioned flawlessly. (As I write this, Remington is gone, pieced out at auction. That ammo might have collector’s status soon.)

I will state for the record three important facts about magnum steel loads for sporting clays use.

One: This is very expensive ammo to shoot at clay targets.

Two: The recoil has an accumulative effect after a few boxes, particularly when you are shooting in just a T-shirt.

Three: When that big payload of steel charging out the door at 1700 fps centers a clay target, the effect will make even a stoic Baptist deacon giggle just a little bit.

Once our eyes started to cross from the heavy loads we switched to 1⅛-ounce target loads. We shot a lot of handloads as well as several boxes of factory loads. The gun never hiccupped, everything ran fine.

The trouble with doing gun reviews in this time of COVID-19 and the “peaceful riots” is that the ammo supply has disappeared. Even birdshot is as rare as an honest politician. I was able to scrounge up a box of 1-ounce target loads, which ran fine. Then I dug into the strata in my garage down to my SASS shooting days and found a partial box of low-recoil ammo. That stuff never runs in a semi-auto, it says it won’t right on the box. This Weatherby spit them out as fast as I could pull the trigger. That’s a very wide range of ammo, from 3½-inch magnum earth shakers to the rather mild low-recoil load. If there is 12-gauge ammo this gun won’t run, I didn’t find it. 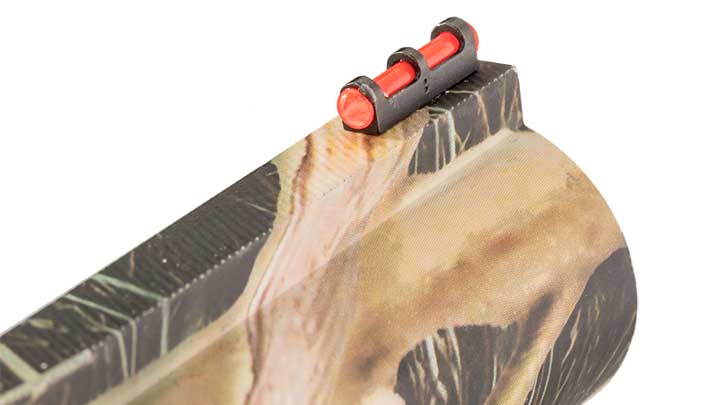 The balance point is about 7 inches ahead of the trigger. This weight-forward balance helps to point the gun instinctively and to track moving birds smoothly. I didn’t get a chance to shoot any ducks, but on our homegrown sporting clay range, which has some tough targets, the gun shot very well for both of us.

This 18i Waterfowler is dip-coated with Mossy Oak Shadow Grass Blades camo. The black accents like the soft comb insert, recoil pad, endcap, trigger guard and bolt offset the camo to create a striking shotgun.

The receiver is machined from a single billet of aluminum. The simple action has a heavy bolt with a rotating bolt head and a stiff spring between them. The extractor is a spring-loaded, pivoting claw attached to the left side of the bolt head. There is a long pivoting “tail” that compresses the return spring located in the buttstock as the action operates. The bolt rides inside a long extension from the barrel, which contains the standing, spring-loaded ejector. The design, materials and craftsmanship all seem to be top quality. This is by all appearances a very well-made shotgun in the Italian semi-auto tradition and should be trouble-free for many years of hard use.

It remains to be seen if its endurance can match the legendary competition it emulates, but from what I was able to see I would not bet against it.