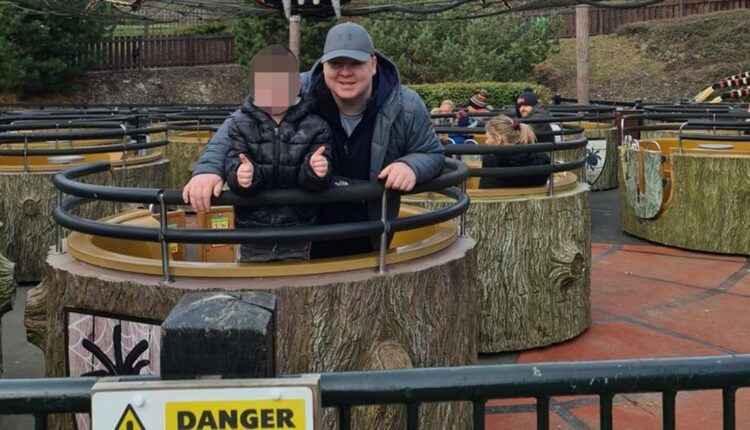 Here is Kinahan cartel target Gary Hanley making a rare appearance in public – as he brought his child to Legoland.

Our exclusive pictures show Hutch associate Hanley, who has been in hiding for years, enjoying a day out in the UK theme park with his family – five years on from dodging death at the hands of a Kinahan hit team.

Hanley, who has close connections with the Hutch mob, has managed to avoid being murdered by the Kinahan gang several times – notably avoiding being shot by a five-man hit team in November 2017.

The Kinahan cartel again tried to have Hanley murdered by gunman Paul Beatty in June 2018 – and since then he has rarely been seen in public.

But in the wake of several garda victories against the Kinahan cartel, Hanley has now braved a rare appearance in public – posing for these photos with his young son in recent months.

In one photo Hanley can be seen on a children’s ride in front of a sign that says ‘Danger,’ while in others the family pose happily in the Windsor theme park.

Kinahan murder target Gary Hanley is pictured out and about at Legoland for the first time since the cartel sent a hit team out to kill him.

The photos show a clearly more-relaxed Hanley out and about – five years on from when ruthless hitman Alan Wilson, Kinahan cartel gangster Liam Brannigan and three others tried to whack him outside his Dublin home.

Wilson, who is a nephew of notorious gangster Martin ‘The General’ Cahill was part of a five-man Kinahan hit team, hired to take out Hanley – a sworn enemy of the cartel and associate of the Hutch gang in 2017.

But the bungling gangsters were caught in the act, as elite armed gardai had been surveilling them for days -and had bugged their phones.

Elite members of the Garda National Drugs and Organized Crime Bureau had to wait until the gang were on their way to Hanley’s home with the murder weapon in order to swoop and catch them in the act.

Liam Brannigan (37), a key member of the Kinahan cartel from Bride Street, Dublin 8, was convicted of conspiring to murder Hanley at a location within the State between September 15th and November 6th, 2017.

The evidence also included phone data extracted from the co-conspirators’ phones and the “interconnectivity” of these phones; sightings of the men by gardaí; and a montage of CCTV footage showing their movements, he said.

Joseph Kelly, Luke Wilson, Alan Wilson and Dean Howe, have previously all pleaded guilty to the same offense – while Brannigan had pleaded not guilty.

Luke Wilson (24), from Cremona Road in Ballyfermot, Dublin, and Joseph Kelly (35) of Kilworth Road, Drimnagh, Dublin 12, were stopped by armed gardaí just after 8pm on November 6th, 2017, after their bugged Volkswagen caddy was stopped on Philipsburgh Ave.

Mr Justice Coffey, reading his judgment, said almost immediately after the men were stopped, they could be heard on an audio recording, saying “It’s the old bill, we’re set up, we’re set up”.

The court previously heard that during that arrest, gardaí seized a 9mm Beretta semi-automatic pistol, a silencer, 15 rounds of 9mm ammunition, several phones, a rucksack and a container of petrol.

Moments before their arrest, Kelly and Wilson had collected the rucksack containing the gun, silencer and ammunition from a cyclist whom they met in a Lidl car park in Glasnevin, the court heard.

The court heard that, before collecting the gun, Kelly took directions about where to collect the weapon during phone calls with a phone referred to as PB3. The user of the PB3 phone was previously referred to as “Mr PB3” by the prosecution.

Mr Justice Coffey said, at one point, Kelly relayed a conversation he had with Mr PB3 to Luke Wilson, telling Wilson there was a “set of apartments” nearby and “he’s going to get yer man to walk down”. This conversation, the court heard, was moments before they collected the gun from the cyclist.

It also heard that Mr PB3 had shared numerous phone calls with phones attributed to Luke Wilson, Joseph Kelly and Alan Wilson on the night of November 6th, 2017, and that Mr PB3 sought numerous “progress reports” from the men at a “critical phase of the conspiracy”.

Mr Justice Coffey said there was “no doubt” that Mr PB3 “had an agreement” with the other men to murder Gary Hanley – and he said it’s clear Mr PB3 had a “central role” in the management and operation of the kill plot.

Mr Justice Coffey said it was “overwhelmingly probable” that the object Brannigan threw was the PB3 phone and that he discarded it “because he was the person who used it” to speak with his co-conspirators in the Volkswagen caddy that night. He said it was an “attempt to discard incriminating evidence before he was apprehended by gardaí”.

Seán Gillane SC, for the State, previously told the court the PB3 phone put Brannigan at the “center of the wheel” of the kill plot.

Hanley himself has more than 30 previous convictions for offenses including drug dealing, serious assault and other crimes.

He has served time in prison, most notably for stabbing a woman in the face with a set of keys while she was holding her baby.

He was sentenced to four years in prison after being convicted of assaulting the woman causing her harm and for threatening to kill or cause her serious injury at Clontarf in Dublin on March 15, 2007.

The victim needed 20 stitches to her face and was left with two permanent scars from the horrific attack.

While carrying out the attack, he called her a “bitch” and told her: “Next time you will get it in the heart.”

His pal Jason Molyneux was also murdered – shot up to six times by hitmen gardai suspect were working for the Kinahan cartel.

Get breaking news to your inbox by signing up to our newsletter.