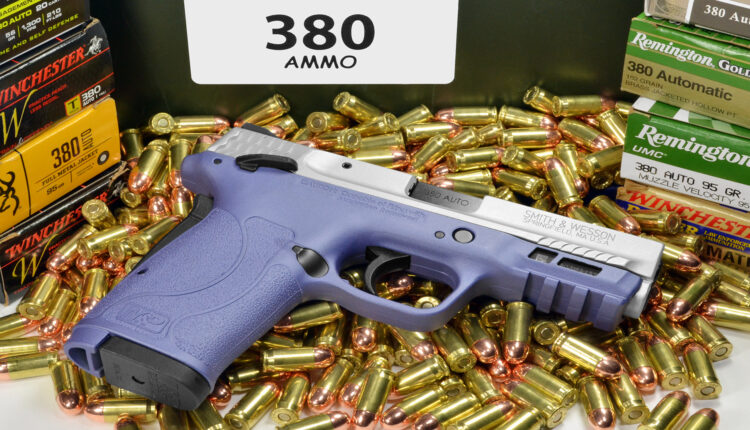 Designed by John M. Browning (b. 1855, d. 1926) and introduced to the world in 1908 in Colt’s new-at-the-time Model 1908 pocket hammerless semi-automatic pistol, the .380 ACP is an old round. Despite its age, the .380 ACP is still popular today for concealed carry in small, sub-compact pistols. Small and lightweight, these pistols generally weigh around eight to 13 ounces and have a capacity of six to eight rounds.

There are larger guns in this caliber, too, falling into the compact- or mid-sized pistol category. In fact, the Model 1908 pocket hammerless is mid-sized at seven inches long and 24 ounces. Current mid-sized .380 ACP guns include Browning’s 1911-380, Beretta Cheetah Models 83 through 86, Smith & Wesson M&P380 Shield EZ and Walther PK380, for example.

The .380 ACP (Automatic Colt Pistol) goes by other names because it has been produced in many countries around the world. Other monikers include the .380 Auto(matic), 9×17mm, 9mm Browning, 9mm Corto, 9mm Kurz, 9mm Short and 9mm Browning Court.

It’s a rimless case that headspaces on the case mouth. It has a minuscule taper, with the base measuring 0.374 inch and the case mouth 0.373 inch, according to SAAMI (Sporting Arms and Ammunition Manufacturers’ Institute) maximum specifications. In practice, it is straight-walled, with overall length just shy of one inch and maximum length of 0.984 inch. 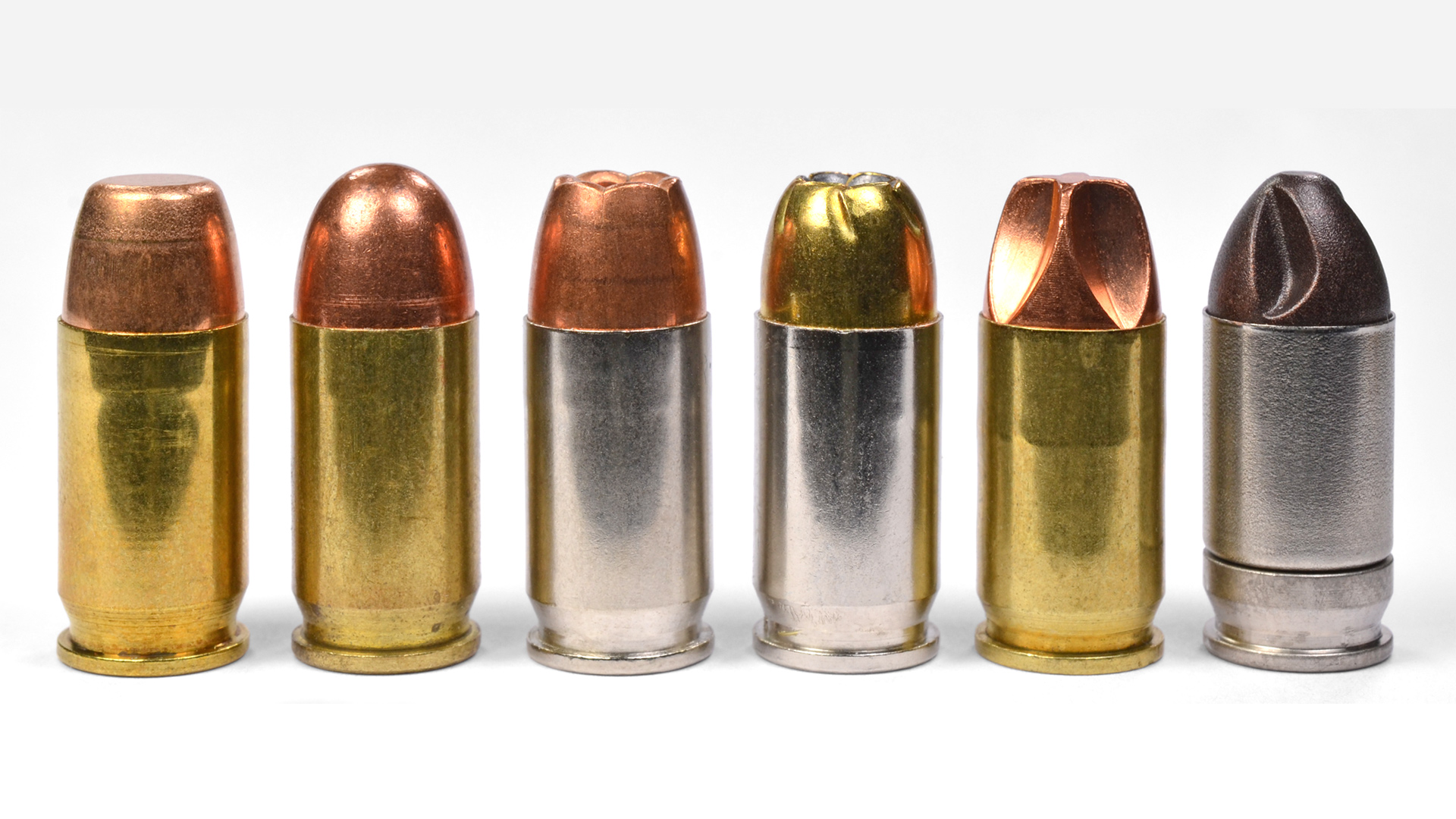 Most factory bullet weights run from 85 to 102 grains with the most common weight at 95 grains. But there are more exotic rounds that run lighter bullets at higher speeds, such as the NovX 56-grain polymer and copper bullets at 1,300 fps, G2 research 62-grain RIP bullet at 1,250 fps and the Lehigh 65-grain Xtreme Defense running at 1,150 fps and faster. Handloaders can use heavier bullets, such as 115 to 124 grains, for which there is load data. 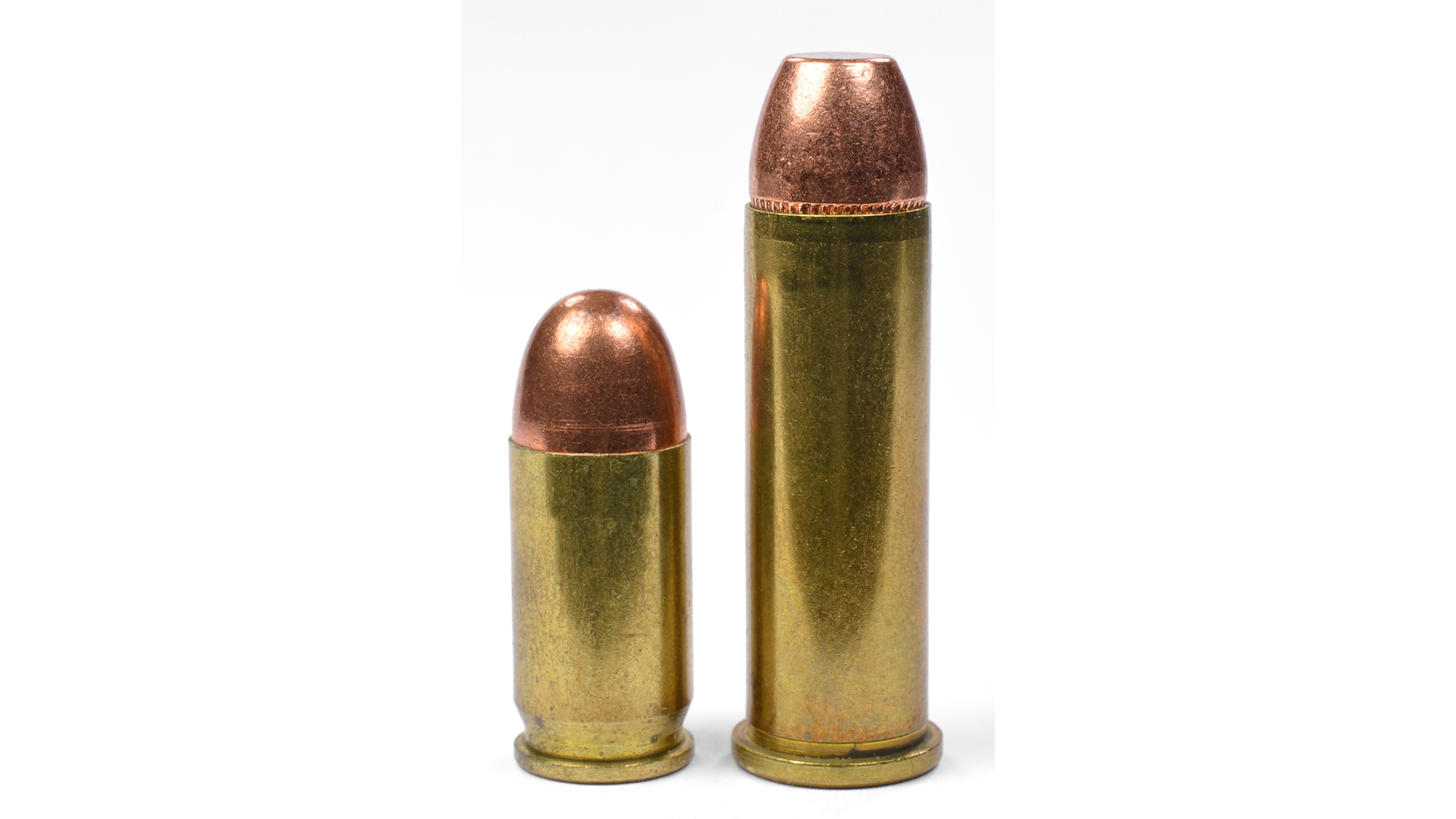 Some companies load +P .380 ACP rounds for additional power and performance. SAAMI recognizes +P ratings and pressure limits for some cartridges, however no such +P rating exists for the .380 ACP. This means that consumers don’t know what the pressure is and whether it will be safe in their gun, and should contact companies directly to inquire whether the ammo is safe in their gun. In any case, since the pressure exceeds industry standards, the shooter likely assumes all risks. And since this +P ammo will produce more recoil than standard rounds, it will work the gun harder and increase wear.

While .380 ACP is sufficient for self-defense, some consider it the least powerful round usable for this role. Others opine that the .380 ACP is not powerful enough. However, Greg Ellifritz’s data from different handgun rounds shows .380 ACP is roughly as effective at stopping a threat as more powerful semiautomatic rounds, eg, 9 mm, .40 S&W and .45 ACP. Intuitively it might be difficult to accept that the .380 ACP can perform as well as those more powerful rounds, but it’s hard to argue against actual data.

The .380 ACP’s moderate power produces half the recoil of a 9 mm and about twice the recoil of a .32 ACP in guns of the same weight. How the recoil feels depends on the size, weight and design of the gun.

Gun design contributes significantly to felt recoil. Many .380 ACP pistols are blowback type. That is, only the slide moves during the recoil cycle, not the barrel, such as in the Beretta Model 84.

Other .380 ACP pistols are locked-breech designs, where the barrel is locked with the slide when in battery and moves a short distance along with the slide during the recoil cycle. One example is the Smith & Wesson M&P380 Shield EZ.

With four .380 ACP pistols and 100 rounds, I headed to the range to compare recoil. Three semi-automatic guns were a Taurus PT 738, Beretta Model 84 and Smith & Wesson M&P380 Shield EZ. The fourth gun was a Taurus 380 UL revolver. 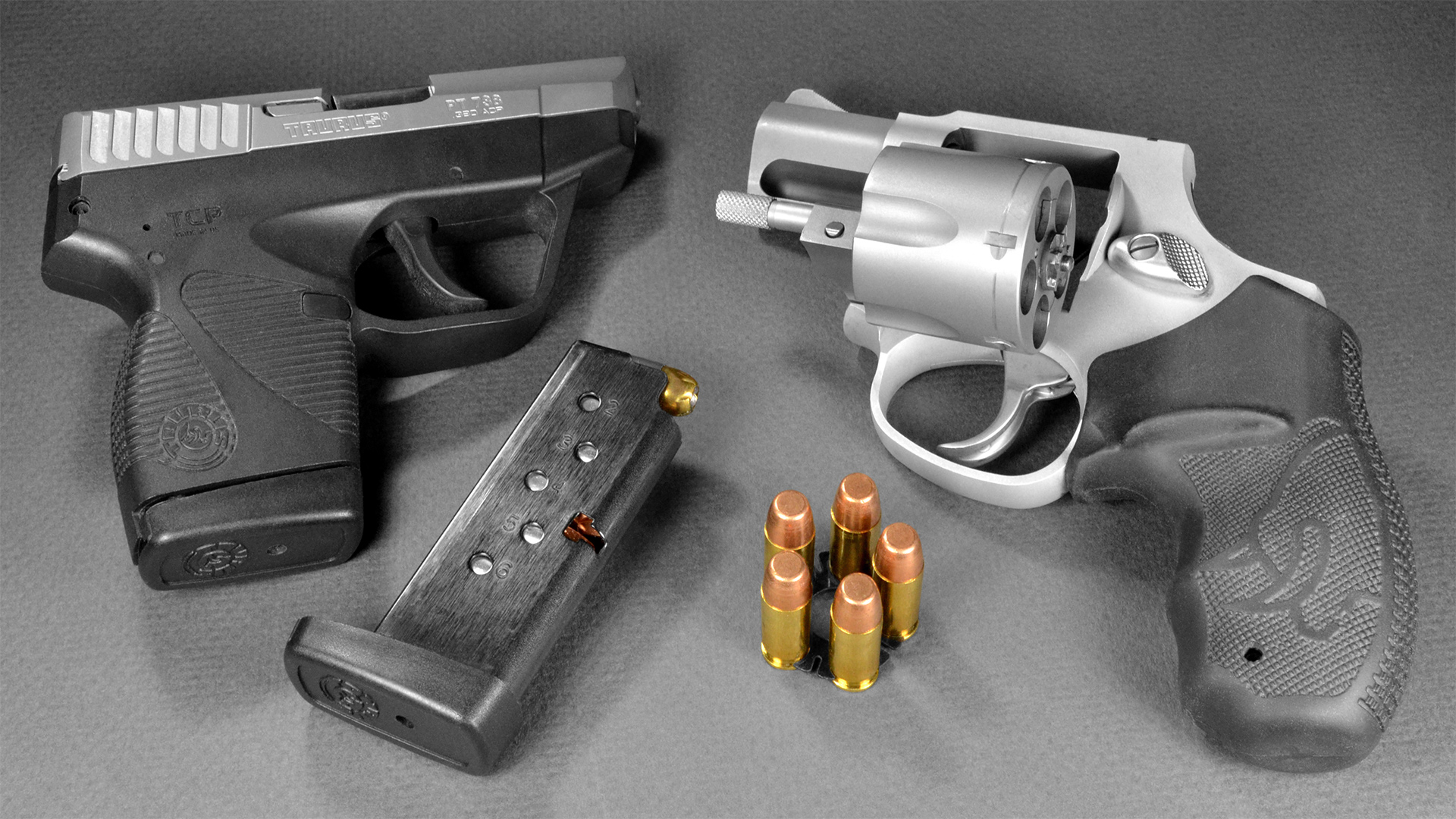 I loaded all the guns and took turns shooting a few rounds from each in a side-by-side comparison until I ran out of ammunition.

Taurus’ PT 738 is a locked-breech gun just like the M&P380 Shield EZ, but lighter and smaller, and a little rough when fired. The felt recoil was similar to the larger Beretta 84. Perhaps the recoil from the Beretta is so bad because it’s a blowback design, or maybe the recoil from the Taurus is so good because it is a locked-breech design. Either way, these guns have about the same felt recoil.

As for the Taurus 380 revolver, felt recoil seemed to be a little less than the Taurus PT 738 and Beretta Model 84. Recoil impulses from revolvers are a little different, in that recoil is “instantly” transferred to the gun frame, because it does not have a slide to spread out the recoil over a few milliseconds as the slide travels to the rear. I expected felt recoil from the lightweight revolver to be a little snappier, and possibly more than the PT 738 and Beretta, but it wasn’t.

The M&P380 Shield EZ was the most pleasant gun to shoot with its softer recoil impulse. A benefit of softer recoil is that one is less likely to develop a flinch from anticipation. It helps you to concentrate on getting a good sight picture and a smooth trigger pull. 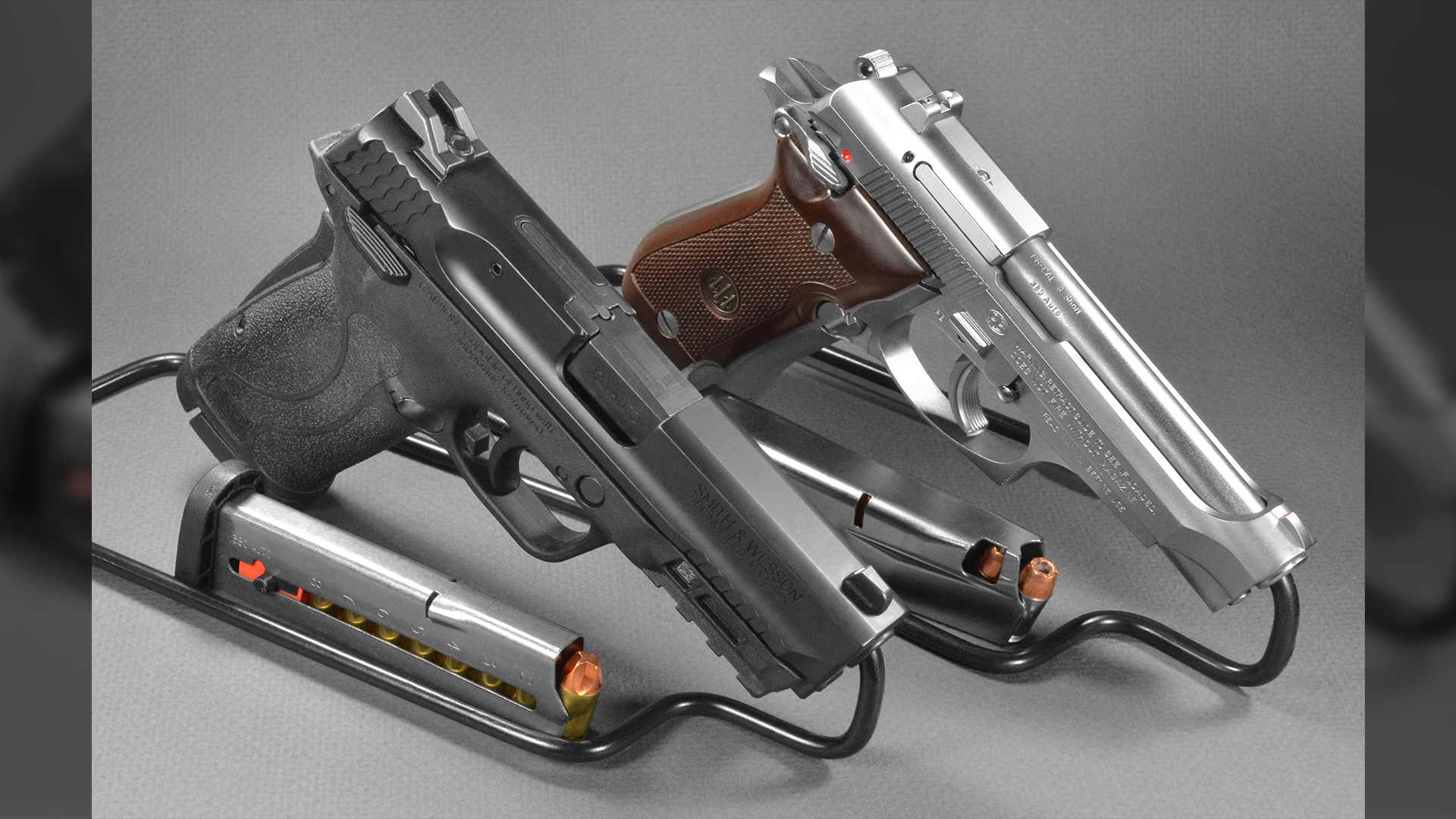 Different shooters don’t always agree about felt recoil. But, there is general agreement among the majority of shooters that blowback guns have a sharper (snappier) recoil impulse than locked-breech guns. Only you can determine what it feels like to you. To me, recoil from the Beretta Model 84 felt about the same as the Taurus PT 738, which sounds surprising given the Beretta Model 84 is larger, weighing more than twice that of the Taurus. Gun design can have a significant effect on felt recoil.

John Browning’s .380 ACP has much to offer. It’s available in a selection of gun sizes, from mid-sized to micro-compact models. It’s powerful enough for self-defense and is a good plinker round for the range. In the right gun design, the .380 ACP is a delight to shoot.