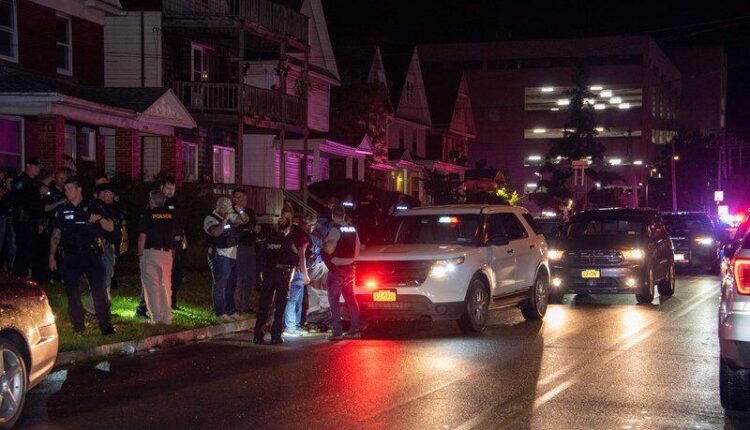 Just before 7:30 p.m. on Tuesday, a task force made up of more than 80 members from federal, state and local law enforcement agencies swept into Cataract City.

Less than 10 minutes later, a New York State Police helicopter kept an eye to the sky and revealed a vehicle flinging up to a dozen police patrol cars at high speed through the streets of Cataract City, sirens wailing and lights flashing. A Gazette reporter embedded in a lieutenant in the Niagara County Sheriff’s Office was there.

“It happened a little faster than I thought,” said Jay Fisher, captain of the Narcotics & Intelligence Division of the Falls Police, of the chase.

But the hunt was not unexpected.

With an increase in shootings and murders to plague the cases and other communities large and small across the United States, law enforcement sources say it has become more common for suspects to attempt to escape from officials. Suspects believe they can escape police, who are reluctant to take the risks associated with high-speed pursuits.

Tuesday’s chase ended on Sixth and Niagara Streets when a male suspect jumped out of the vehicle that officials tried to stop because of an expired registration. The suspect was arrested a short time later in a house on Fifth Street.

The unidentified man had a lot of suspected crack cocaine in his possession. Investigators said they believed he might have been armed during the chase, but they did not find a weapon from him.

In was the first of a dozen arrests made over the course of a seven-hour attempt to summarize what was termed “the Police Department’s top violent criminals.”

“These are the guys you’ll find the guns on,” Fisher said.

Halfway through the operation, around 11:22 p.m., investigators found three guns at a traffic stop on the 400 block on 19th Street. Detectives said as they approached a brown Buick driven off the falls by Dwayne Lee Walker, 31, they saw “a small amount of marijuana, three scales and a box of ziplock bags” in the passenger seat of the vehicle.

When investigators asked Walker to get out of his car and scanned him for weapons, they found a cocked and loaded revolver in his right front pocket. As the police announced, the serial number of the weapon had been made illegible.

In the trunk of the car, detectives discovered a Mossberg 5000 12-gauge shotgun with a pistol grip and five shots. They also confiscated a Smith & Wesson M & P9 9mm pistol with 16 rounds in the magazine.

Walker told investigators, “I took this (expletive) from the guy who was just trying to rob me.”

Police charged Walker with second-, third-, and fourth-degree criminal possession, and second-degree criminal contempt, for violating a protective order prohibiting him from possession of firearms and inadequate license plate lighting.

The operation, which roughly tripled the number of officers who normally lived on the streets of Falls, was also intended to provide an additional uniformed patrol presence in the locations identified as “crime hotspots” in the city.

In addition to the 12 arrests and the firearms confiscated from Walker, police officers also seized two other handguns and quantities of suspected narcotics. The officers, deputies and agents also carried out 13 arrest warrants and issued 107 parking tickets.

“(We) wanted to build a presence to increase safety and get bad actors off the streets,” said Restaino. “Gun violence has increased in cities in western New York and across the country, and Niagara Falls has not been immune to it.”

Faso said the saturation patrols were focused on high crime areas and targeted some of our most violent offenders. Among those arrested on gun charges, Faso said two will face federal firearms counts.

U.S. Attorney General’s were on site for the operation and filed the federal cases.

“This has been an ongoing effort by several agencies,” said Filicetti. “It’s a joint effort. We won’t solve it overnight. Crime knows no borders, and that’s not just a Niagara Falls problem. “

A string of searches and saturation patrols in June also resulted in multiple arrests and the seizure of half a dozen firearms.