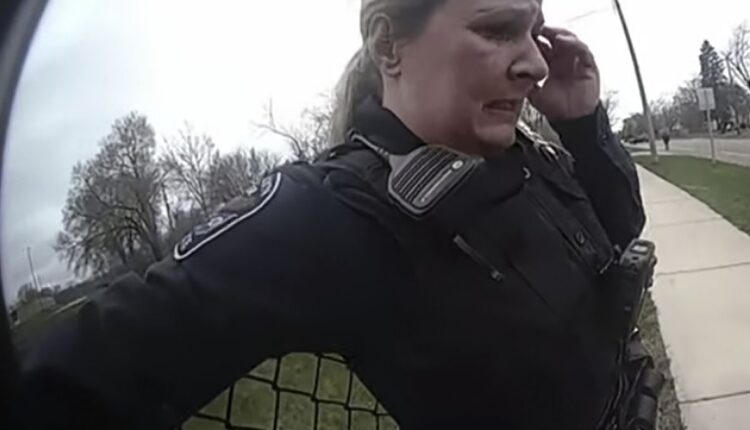 In this screenshot of police bodycam footage shown in court on December 10th during the trial of Kim Potter, the Brooklyn Center officer reacts after the April 11th traffic control in which Daunte Wright was fatally shot.

Kim Potter, the former Minnesota police officer who mistakenly drew her pistol instead of her taser during a traffic stop in April that fatally shot Daunte Wright, was convicted.

The jury had been deliberating since Monday before they found Potter, who had served as a civil servant in Brooklyn Center, Minnesota, on charges of first and second degree manslaughter in Wright’s death.

The verdict follows a closely watched two-week trial that was crowned by Potter’s appearance on the witness stand, where she sobbed as she remembered the shooting and said she was “so sorry” for what happened.

Potter will be sentenced at a later date. The state’s sentencing guidelines recommend approximately seven years’ imprisonment for the first degree and four years for the second degree, although prosecutors sought a longer sentence.

The deadly confrontation on April 11th began when Potter, along with Anthony Luckey, a new officer she was training that day, pulled Wright, a 20-year-old black man, over because he had expired license brands and a dangling air freshener on the back of his mirror – a Minnesota violation.

The stop escalated when police discovered that Wright, despite not being armed, was wanted for arrest for failing to appear in court for possession of guns. When Luckey tried to arrest Wright and handcuff him, Wright twisted away and got back into his car.

Footage from body-worn cameras and a dashboard camera in the patrol car played for the jury during the trial captured the final chaotic moments in Wright’s life.

“I’ll tase you,” yelled Potter. But in her right hand was a dark 9mm Glock pistol, not the bright yellow taser that stayed in the holster on her left side. Five seconds later she shouted, “Taser! Taser! Taser!” then fired a single round into Wright’s side. He was pronounced dead at the scene.

The footage also shows the immediate aftermath of the shooting, in which Potter appeared in shock. She gasped and said, “I grabbed the wrong gun” before collapsing on the curb with her head in her hands.

Prosecutors say she should have known the difference

Prosecutors do not deny that the shooting was an accident. But they said Potter had received extensive firearms and taser training, including how not to confuse the two, in her 26 years with the police force. They turned to violence experts and the Police Policy Manual to argue that the use of a taser was inherently inappropriate.

“She drew a lethal weapon, she aimed, she pointed it at Daunte Wright’s chest, and she fired,” Assistant Attorney General Erin Eldridge said during the state’s closing speech on Monday.

Your lawyers call what happened a “mistake”, not a crime

Potter’s defense team argued that Wright caused his own death by ignoring police orders and trying to escape. Because of this, they said, Potter should not be held criminally responsible.

“A mistake is not a crime,” attorney Earl Gray told the jury in closing arguments.

“In society nobody is perfect. Everyone makes mistakes. Some of these mistakes are small mistakes, but some of them are very serious.”

Potter’s attorneys also argued that the use of lethal force was appropriate as a third officer, Sgt. Mychal Johnson, leaned into the car through the passenger door to prevent Wright from controlling gear changes. If Wright had been allowed to leave, it was said that Johnson’s safety would have been at risk.

Potter, who resigned from the police after the shooting, collapsed in the stands on Friday and cried as she testified that she “didn’t mean to hurt anyone”.

When questioned by the prosecutor, Potter expressed his regret. “I’m sorry it happened,” she said, sobbing.

Wright’s death occurred about 10 miles from the courthouse, where Derek Chauvin, a former Minneapolis police officer, was on trial for the murder of George Floyd, whose death fueled national protests against police abuse and racial injustice.

Jamaican gets 24 yrs for drug trafficking, illegal gun and more in US