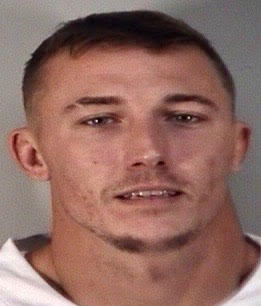 A suspected drunkard in Leesburg was arrested early Sunday with a semi-automatic weapon in his vehicle.

Brian Biesel Jr., 29, was driving a black Toyota near County Road 44 and County Road 452 when he was having trouble keeping a proper lane, according to an arrest report from the Eustis Police Department.

At a traffic control, Biesel was asked if he had weapons. He said he didn’t. However, they discovered a 9mm Smith & Wesson semi-automatic pistol that had a full magazine with a cartridge inserted into the chamber. The gun wasn’t on. Biesel admitted that he had no concealed carry permit.

When Beisel was questioned, the officers could smell a strong alcohol odor emanating from him. He agreed to take standardized field sobriety exercises that indicated he was impaired. He was arrested and taken to the Lake County Jail, where he agreed to take an alcohol test. The two samples showed blood alcohol levels of 0.157 and 0.151. He was charged in prison with driving under the influence and carrying a gun openly. He was released after depositing a $ 1,500 bond.

KHN’s ‘What the Health?’: The Big Biden Budget Bill Passes the House