11 Face Charges, Sale of “Switches” That Turn Pistols Into Machineguns

Editors Note: The following press release is directly from ATF. Regular readers of AmmoLand News know our stance on the unaccountable Federal.. 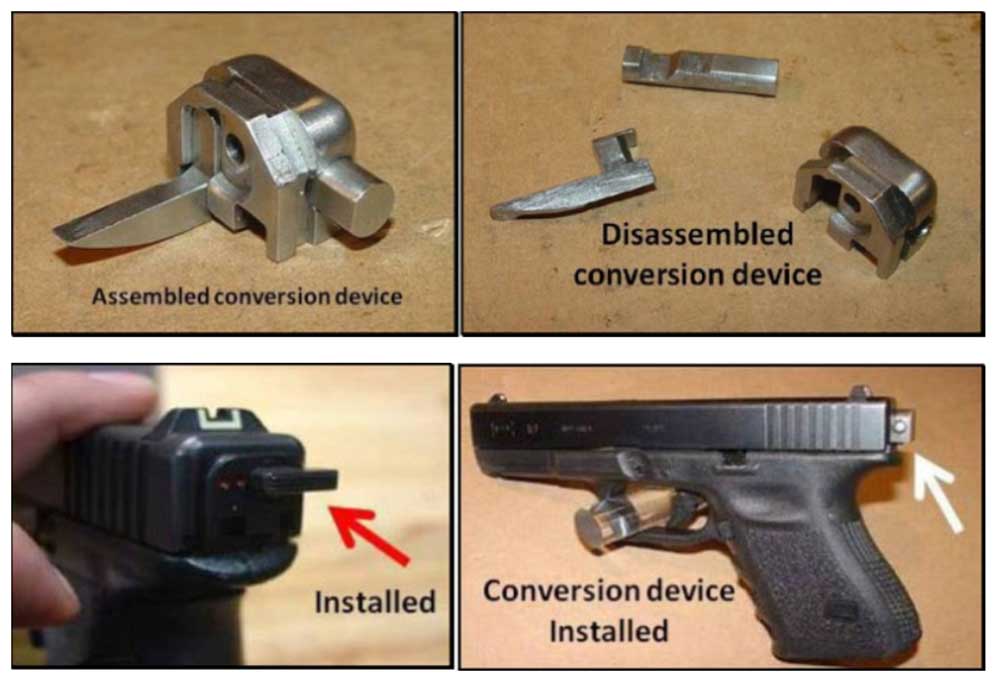 Editors Note: The following press release is directly from ATF. Regular readers of AmmoLand News know our stance on the unaccountable Federal Agency: No comment. We invite our readers to leave their hard-hitting insights in the comments below.

GRAND RAPIDS, MICHIGAN--(AmmoLand.com)- At a 3:00 pm press conference in Benton Harbor this afternoon, US Attorney Mark Totten was joined by several local, state, federal, and tribal law enforcement officials to announce that, earlier today, eleven men from Benton Harbor and Grand Rapids, Michigan were charged with drug trafficking and firearms crimes. Five were arrested this morning, and five were in custody on prior charges. Seven men face charges related to the possession and transfer of firearm conversion devices, known as “switches,” which transform ordinary semi-automatic pistols into fully automatic machineguns. According to a criminal complaint filed in the case, a switch can be installed with little technical knowledge in approximately one minute. Once installed, it can enable a semi-automatic pistol to fire over 1,000 rounds per minute with a single trigger pull.

“Today’s action represents a major step forward in our efforts to combat the rise of violent crime in Michigan,” said Mark Totten, US Attorney for the Western District of Michigan. “The destructive capacity of a firearm equipped with a switch is staggering. These devices are an emerging threat to our communities, our children, our law enforcement officers, and anyone who stands in the path of their indiscriminate spray.” Totten also commended the joint law-enforcement effort behind today’s action: “These charges represent a remarkable, multi-agency effort that involved the FBI and ten other federal, state, local, and tribal law enforcement partners working together to keep West Michigan families safe .”

“Fighting violent crime requires approaches tailored to the needs of individual communities. That is why our approach to disrupting this conspiracy to distribute firearms, switches, and drugs involved the kind of coordination you see here today,” said James A. Tarasca, Special Agent in Charge of the Federal Bureau of Investigation in Michigan. “I believe it is the sacred duty of the FBI and our law enforcement partners to ensure people can live free from fear in their own homes and neighborhoods, and we will all continue to do everything we can to protect our communities from violent crime.”

“Conversion devices are not simple firearms parts or metal accessories, as commonly advertised. When a person uses an illegally converted weapon that shoots multiple rounds by a single function, it poses an even more serious threat to public safety,” said Craig Kailimai, Assistant Special Agent in Charge for the Detroit Field Division. “The collaborative effort and commitment between the US Attorney’s Office, our Federal, State of Michigan, and Local partners to investigate and prosecute these cases protects our communities from this violent threat.”

The charges in a complaint are merely accusations, and all defendants are presumed innocent until and unless proven guilty in a court of law. A copy of the criminal complaint can be found here.

Law enforcement continues to search for Eric Williams. Members of the public with information as to Williams’s whereabouts are encouraged to contact the United States Marshals Service at (616) 456-2438. He is believed to be located in either Benton Harbor or Grand Rapids, Michigan.

ATF is the federal law enforcement agency responsible for investigating violations of the federal firearms and explosives laws and regulations. More information about ATF and its programs can be found at www.atf.gov.