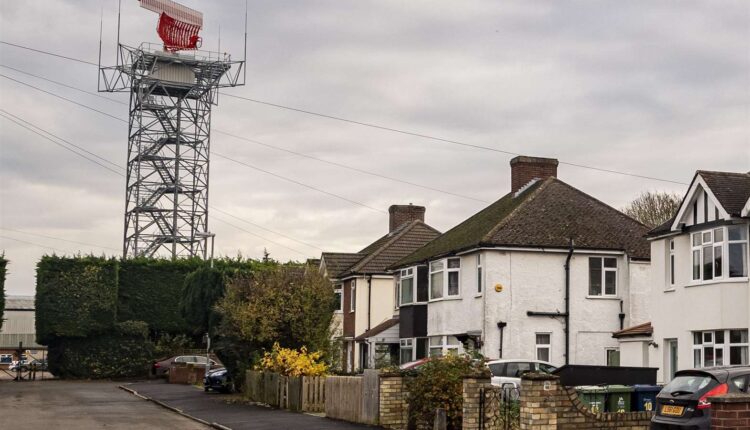 A noisy 40-metre high radar tower built by Marshall Aerospace and Defense Group (MADG) is set to be moved away from homes in Cherry Hinton, but not far enough, campaigners say.

It was constructed just 40 meters from people’s houses in 2020 to replace an older tower about kilometers away. But after residents objected, Marshall proposed to move it to a site 200 meters away from homes.

Hundreds of objections to the tower have been sent to Cambridge City Council planners, including that it exposed residents to a non-stop hum, that it disturbed sleep and work and that its constant rotation caused shadows to flicker across their windows. Campaigners say some people neighboring the tower have ended up on medication as a result of their distress, while others have moved away.

And objects claim that the radar tower was moved close to the existing residential area so that it does impact a new housing development on Marshall land.

Drew Winlaw, a law firm partner who lives close to the tower on The Westering, said: “The impact on us is not theoretical – we have had a sneak preview of what it will be like with the tower they erected in 2020. When it ran, it made an absolutely horrendous noise. It wasn’t especially loud but it was constant. If you stayed here for a day or two, that noise would sort of get inside you and then you wouldn’t be able to get it out of your head. It’s an industrial noise. And it does actually drive you mad. We’ve had several people move out of the street because they couldn’t cope with it and people started medication because of anxiety caused by the noise.

The radar tower was built under controversial part G ‘permitted development rights’ without a full Environmental Impact Assessment in the autumn of 2020, meaning it did not need planning permission. It was built to replace an old tower at a distant part of the site, close to an area that is due to be redeveloped for housing. After objections, Marshall agreed to move the new tower further away.

The Marshall radar tower at the end of Sunnyside, Cambridge . Picture: Keith Heppell. (57440193)

The company’s planning document says: “The AR15 radar (old, defunct tower) currently restricts the height of the development proposed on the land allocated and consented for development to the north of Cherry Hinton. The replacement radar will remove these restrictions enabling the most efficient and effective development of this site to come forward as consented.”

A city council planning officer recommended the tower for approval, citing the need for the new housing development to be unaffected.

The officer wrote: “This is a finely balanced decision. The proposed H17 Radar would generate significant adverse landscape and visual effects, including on the recreational users of Coldham’s Common and the common’s landscape character. However, officers recognize that the development would also bring about substantial safety benefits, enabling the existing business operations at the airport to continue until the planned closure of the airport. It would also facilitate wider economic and social benefits by enabling the development of the land north of Cherry Hinton (LNCH) development site. On this basis, the benefits of the proposals are considered to weigh in favor of supporting the scheme.”

Cllr Matthew Howard (Abbey, Green) was a member of the campaign to move the radar. He said: “Since our campaign, Marshall have conceded that they ‘got this one wrong’, yet they demonstrate their regret for the situation by submitting a planning application to move this monstrosity only 150 meters south-west, where it is still only around 200 meters from the nearest house: still many times closer to the nearest house than similar high-power radars around the country.”

A spokesperson for Marshall ADG said: “We believe we have addressed as many of the concerns raised by the local community as is practicably possible, taking into account a range of pre-existing site constraints which include the proximity to the existing radar and other airport safety equipment, runway, height of hangars, the operational needs of our business and importantly environmental effects such as noise, visual and shadow flicker impact. As such we are confident that the proposed siting at Hangar 17, being over 200m away from the nearest residential building, represents the best viable alternative to the current location at Hangar 16.”

The meeting discussing the proposal is starting at 10am today (Wednesday, June 22).

Senate Deal Raises Hopes for a Reduction in Gun Suicides