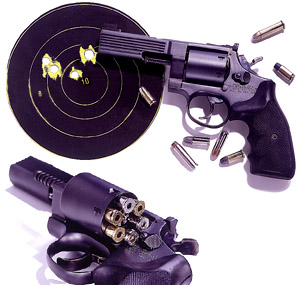 The shooter in the bay next to mine watches skeptically as I load the conventional-looking revolver with an unusual array of ammunition: a .380 ACP, two 9mm Lugers, a .38 Special Plus-P and two .357 Magnums. He maintains a discreet distance as, with my right index finger outside the trigger guard, I raise the gun to chest level pointing down range, then close and lock the cylinder into the frame.

I cock the hammer with my right thumb and squeeze off the first round. Bright yellow appears at the edge of the dark black center ring of the target 50 ft. away. Even though the Medusa is a double-action pistol that will fire a single bullet with every pull of the trigger, I repeat the single-action process until all six rounds are spent–the final three higher-powered rounds accompanied by a satisfying kick not evident with the first three. More yellow spots appear in the black, nearer the center.

Click to enlarge Unique cylinder and components are the key to the Medusa’s multicaliber capability.

I reload the same mix of calibers, close the cylinder as before, and repeat the process using double-action. When I am finished, my skeptical observer steps up and says, “Pretty unique. Can I try that?” It’s a scene that will be repeated many times before the range goes cold for the day.

Unique is exactly the way to describe the Medusa Model 47 revolver, a standard 6-shot revolver from Phillips & Rodgers that chambers, fires and extracts 25 different cartridges in the .38/9mm/.357 ammunition range. This multicaliber firearm is a long-sought solution to a problem worked on by Colt, Smith & Wesson, and other firearms builders for more than a century.

The original Medusa cylinder design came from the bench of gunsmith Jonathan Phillips, a computer specialist for NASA and a former competition shooter, who used to regularly carry 12 to 15 guns of different calibers to the range every time he went to shoot. Knowing that the calibers he shot the most–.38, 9mm and .357–were all the same size, he decided there had to be a way to minimize the number of guns he had to own. Phillips (who’s the cofounder of Phillips & Rodgers) took two years to fashion the first working prototype and patent it.

Phillips first solved the problems involving the latch, which holds bullets in place within the cylinder chambers, and the extractor, which ensures that all spent shells can be quickly extracted before reloading. But the chamber proved to be a tougher problem. With the shorter cartridges, particularly the .380 calibers, which have a greater distance to span in the chamber before they enter the barrel, there was too much room for movement. This affected accuracy.

Phillips teamed up with Roger Hunziker, now president of Phillips & Rodgers. The pair addressed the short-round accuracy problem by adding a comparatively shallow 6 degrees forcing cone at the end of each chamber, which helps to align the bullet before it reaches the barrel entrance. A second 11 degree forcing cone further aligns the bullet for accuracy. How accurate is accurate?

More Bangs For The Buck

Most of the handguns sold in the United States are either .38 or .357 caliber. Interestingly, the Medusa’s cylinder will chamber and fire up to 104 different cartridges worldwide, down to a 5.5mm round, although the company recommends only the 25 cartridges listed in its literature.

But why the need for multicaliber capability in the first place? There are some good reasons. First, you can buy inexpensive 9mm ammo for fun and target practice, then switch to a more powerful .357 when you’re ready, or when the situation warrants it. Second, for those who have difficulty shooting a .357 because of its kick and noise the 9mm solution is important. Third is overall cost: Must you really have a different gun for every caliber, and every shooter in the family?

Patterned after the Smith & Wesson K-Frame pistols, the Medusa’s frame is made of 8620 steel, hardened to 28 Rockwell. Barrels are a special pour of 4150 chromemoly steel. At the request of forensic scientists, Phillips & Rodgers is building the Medusa with nine lands and grooves–it’s the only handgun in the United States and perhaps the world with this barrel rifling configuration. Most others have from six to eight lands and grooves.

The cylinder itself is interesting. To withstand the varying pressures involved, the cylinder is made with mil spec 4330 modified vanadium steel (the alloy used in the Gatling gun barrels of F-16 Falcon fighters), hardened to 36 Rockwell. It offers a whopping tensile strength of 210,000 psi and a yield strength of 235,000 psi. Roger Hunziker says that’s at least two times the tensile strength of any other revolver cylinder on the market–and totally necessary to the design. The outer diameter is dictated by the frame in which it fits. Because of the patented multicaliber componentry inside the cylinder, the cylinder walls are very thin compared to standard revolver walls. The special extractor/latch, which is critical to this design, fits right in the center of the cylinder, so instead of a .125-in. hole in the center, there is a .337-in. hole. This means the individual chambers must move out closer to the outer diameter of the cylinder.

A close inspection reveals how the Medusa’s unique cylinder works. Look at the face of the cylinder and you will see recesses on the chambers for revolver cartridge rims, plus what appear to be fingers projecting into the chamber opening. You can depress them with your fingernail. Unscrew the extractor rod and remove the extractor/latch, and you will see that the fingers are part of a cylinder-long spring mechanism that deploys in slots just below the cartridge rim recesses.

When you insert a rimmed (revolver) cartridge, the finger is pushed toward the center of the cylinder and is not functional. The rim helps to position the cartridge.

But when you insert a rimless (semiautomatic pistol) cartridge, the finger is again pushed inward until it springs back out into the extraction groove to hold the cartridge firmly in place against the outside wall of the chamber. After you fire and open the cylinder, pressing the ejector rod forces the entire assembly backward. The fingers extract the cartridge case, either by gripping the extractor groove of a rimless cartridge or by pushing against the rim of a revolver cartridge.

The Medusa uses a floating firing pin, which is housed in the frame between the cylinder face and the hammer striking area. Two integral safety mechanisms are patterned after Smith & Wesson double-action designs. After ignition, the hammer returns to a resting position on top of a ridge on the rebound slide, nearly one-eighth of an inch away from the firing pin. The hammer will not go forward until it is fully cocked again. There is also a golf-club-shaped safety bar in the way of the firing pin that prevents accidental discharge. Even if you hit the gun hammer hard enough to break it and move it forward, the gun won’t fire. Cowboy Guns of the Old West

Listen: He Was Denied Care Because He Owed His Doctor Less Than $100