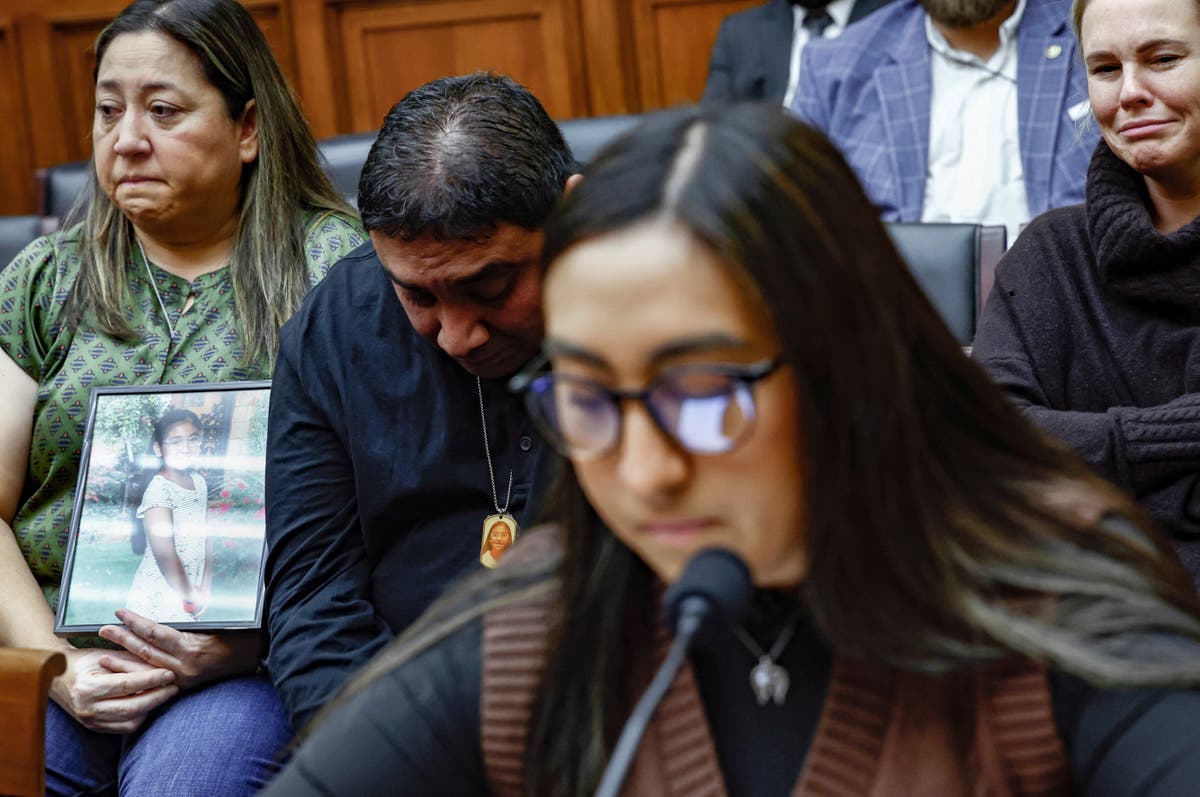 Ten years and one day after 20 of her Sandy Hook Elementary schoolmates were killed in the nation’s deadliest school shooting, Nicole Melchionno, now 17 years old, was seated before members of Congress in the wake of another massacre.

Ms Melchionno was a seven-year-old second-grade student at Sandy Hook Elementary School on December 14, 2012, sitting on the carpet with her classmates and awaiting the day’s lessons from her teacher, when she heard “what sounded like large metal pans being smashed together” down the hall.

Her teacher pulled two students from the hall into the classroom, turned off the lights and quietly read a book to her classmates, huddled up near their cubbies, to calm them down.

Police were able to evacuate the room and escort the children to a nearby firehouse for safety. Adam Lanza, 20, used an AR-15-style assault rifle to kill 26 people that day before killing himself.

What followed was “the most horrific aftermath,” Ms Melchionno said in her testimony to the House Judiciary Committee on 15 December, as lawmakers continue to debate how to combat gun violence after 19 children and two teachers were killed inside their classrooms at Robb Elementary School in Uvalde, Texas earlier this year.

“How do we continue to allow this? I have grown up in a world where the unimaginable happens over and over again,” Ms Melchionno said. “We live in the constant aftermath of inaction from our lawmakers.”

More than 350,000 people in the US have been killed by gun violence in the decade between those school massacres. Between them, there have been at least 54 school shootings involving active shooters, killing 101 people and injuring 156 others. Gun violence is the leading cause of death among American children.

Faith Mata, a 21-year-old college senior, fondly remembers family road trips and bringing mattresses into the living room to spend nights together with her parents and young sister Tess, who was born 26 February 2012.

“Being the older sibling it is my duty and obligation to be her role model,” she said. “It was my purpose and strength to be the best person I could be.”

On 24 May, she received a message from her cousin to call her mother, who told her a gunman was barricaded inside her 10-year-old sister’s school in Uvalde. She waited with her family for more than eight hours in a holding area for families at a nearby civic center, where she learned Tess was among 21 people who were fatally shot.

“My parents should not have to plan their own child’s funeral,” she said. “Our lives have darkened because our light has left.”

Faith Mata, whose 10-year-old sister was killed in the Robb Elementary School mass shooting, testifies to the House Judiciary Committee on 15 December

A gunman, 18-year-old Salvador Ramos, purchased two AR-15-style rifles on his 18th birthday days before the attack. He also bought hundreds of rounds of ammunition.

Dr Roy Guerrero, Uvalde’s only pediatrician, held his phone to a microphone in front of the committee to play a recording of a 911 call from children inside the school.

On May 24, Dr Guerrero viewed the bodies of two children who were shot as he assisted hospital staff in the massacre’s aftermath. He said he was not able to recognize one of them.

“This child was headless, ripped apart. The other child had a chest wound so large you can put a hand through it,” he said. “I’d never seen a kid shot before. These were devastating injuries that no one could survive.”

Gun reform advocacy groups, including those led by parents of Sandy Hook victims and families of victims in school massacres across the US, have pressed lawmakers in Washington DC to renew a federal assault weapons ban, which expired in 2004.

President Joe Biden has repeatedly urged Congress to renew the ban, which has faced near-universal resistance from congressional Republicans. In June, he signed into law one of the most significant pieces of federal gun reform legislation in three decades, but the bill fell short of what the president and Democrats have demanded to curb the proliferation of high-powered weapons in the wake of daily mass shootings.

Dr Guerrero said the “naysayers and obstructionists” in the debate over assault weapons “look like adults but sound a hell of a lot like children.”

“I’m a gun owner, and I believe in the second amendment, but I’m also doctor, and I deal with facts about emotion,” he said. “What is it going to take to take guns out of the equation? … You’ve seen all the evidence you can possibly see they inflict needless death and destruction. What’s it going to take to change your minds?”

Ms Mata asked whether the committee has grown tired of hearing stories of victims and victims’ families, a topic that has dominated recent congressional debate but yielded few victories for advocates.

“This debatable topic on assault rifles should not be brought up again because someone else’s child or sibling was murdered. It’s just an excuse at this point,” she said. “You may never understand what my family is going through, and I’m not asking you to, but today you can make a change to help families never have to feel what my family feels.”


Did you miss our previous article...
https://galleryforgreatguns.com/modern-sporting-rifles/review-primary-arms-glx-2x-prism-scope