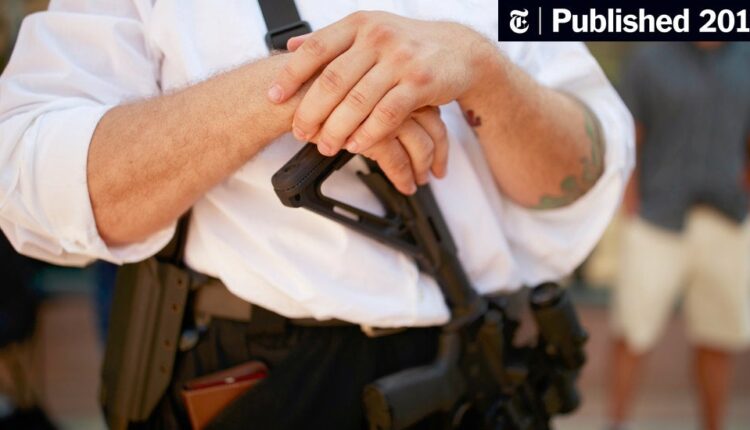 With proper care and maintenance, an AR-15 rifle made today will fire just as effectively in 2119 and likely decades to come.

There are currently around 15 million military-style rifles in civilian hands in the United States. They are very rarely used in suicides or crimes. But when they are, the bloodshed is appalling.

Acknowledging the grim reality that we will live between those guns indefinitely is a necessary first step in making the nation safer. Frustratingly, calling for a ban on military-style guns — as I’ve been doing for years — could make passing other life-saving gun laws more difficult.

President Trump said Wednesday, while touring two mass shooting sites in Ohio and Texas, that “there is no political appetite” for a new assault weapons ban. It doesn’t matter that a majority of Americans support such a ban.

Without forced confiscation or a major cultural shift, our great-great-great-grandchildren will live side-by-side with the weapons we have today and make tomorrow. It also means that we are much closer to the beginning than the end of the plague of mass public shootings with military weapons. No wonder big companies are now including mass shootings in their shareholder filings with the Securities and Exchange Commission.

Sound gun control policies can and will reduce the number of people killed and injured by guns, deaths, homicides and suicides caused by domestic violence. The failure to enact nationwide mandatory comprehensive background checks, safe-keeping rules, warning flag laws, and robust licensing systems like those enacted in Massachusetts is a political negligence that will baffle future generations. How could they even allow these weapons to be sold to civilians? Why didn’t they do anything about it after the mass killings started?

Laws that make it safer for Americans to live with guns around will not remove military weapon contamination from society, but they will certainly save some lives.

Not only is confiscation politically untenable — gun owner compliance rates when bans are passed are ridiculously low. The social spread of these weapons makes even their ban almost impossible. In 1996, Australia introduced a mandatory arms buyback of 650,000 military-style guns. While gun ownership per capita in the country has fallen by more than 20 percent, Australians now own more guns than they did before the buyback. New Zealand leaders launched a forced buyback of tens of thousands of military weapons estimated to be in the country in the wake of the Christchurch massacre.

For context, in 2016 alone, more than a million military weapons were added to America’s existing civilian arsenal, according to industry estimates.

Not only is the total number of guns in America orders of magnitude greater than in other nations, the political imagination is far less ambitious. Consider a federal ban on assault weapons that Democrats introduced this year. It is a messaging-only bill as there was no chance of gaining Republican support and becoming law. But even this thought experiment falls short: the draft law bans military weapons, with the exception of military weapons that are already in circulation by the millions.

America’s gun problem is much bigger than military-style guns, the mass murderer’s weapon of choice. There are hundreds of millions of handguns in the country, causing far more deaths – both murders and suicides. Given the quality of modern manufacturing, many of these weapons will still be operational a century from now.

Viewing guns as environmental pollutants is helpful in considering the threat they pose to our and future generations. Like radioactive waste, a firearm is mostly handled safely. Depending on the type, it causes different harm to humans.

I introduced the idea of ​​guns as an environmental pollutant to John Rosenthal, a gun owner and founder of Stop Handgun Violence. Mr. Rosenthal, whose early activism included imprisonment for civil disobedience at nuclear power plants and weapons facilities, remarked that given the potential lethality of their products to humans over time, it was not surprising that both the nuclear industry (1957) and the Die Gun industry (in 2005) secured federal laws to limit their liability.

Like many actual environmental pollutants, firearms are not evenly distributed across the country. Nearly one-third of United States residents own a gun, two-thirds of gun owners own more than one, and nearly half of all firearms in civilian hands are owned by 3 percent of the population. According to a study, more than 60 percent of Alaskan households own a firearm, while fewer than 6 percent of Delaware households can say the same. Alaska has one of the highest per capita firearm mortality rates in the nation. More access to guns, more gun injuries and deaths.

The only way to shorten the half-life of guns is to convince Americans that they’re safer without them. But with violent crime at an all-time low and Americans still buying up semi-automatic rifles by the bushel, it’s hard to see what it will take to halt spending. Meanwhile, fears of gun bans are pushing even more guns into civilian traffic.

Those of us hoping for a major generational shift in guns will be disappointed. Younger Americans are far less likely to own guns than previous generations, but those who do are more eager to own them.

This does not mean that cultural change is not possible in the long term. Perhaps children who are forced to participate in active target practice in kindergarten develop a generational aversion to guns. Perhaps people who inherit arsenals from their relatives will dispose of the weapons responsibly. Perhaps financial incentives like a tax on guns per household, tax credits for buybacks, or requiring gun owners to have special insurance could move the needle a bit. We already know that even modest efforts to remove environmental pollutants from a community pay off.

If gun control advocates candidly acknowledge that military-style guns will be present in American society for many generations to come, perhaps it will help allay fears of mass seizures and give gun owners the space they need to practice sensible safeguards support that will save lives.

The guns – even the ones that make mass killings deadlier – are here to stay.