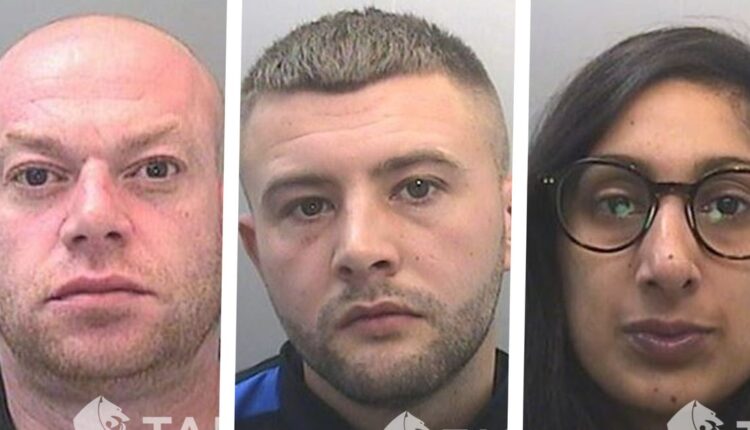 A gang which dealt up to £5m worth of drugs in a substantial commercial operation were discovered after their encrypted chats were cracked by police. The group also bought firearms as part of the enterprise which saw them trafficking class A drugs into south Wales.

The group was led by Kuldip Singh Dhillon, of Cardiff, and his lieutenant Jay Abdul, of Barry, who enlisted other members including romantic partners to facilitate the purchase and supply of drugs including cocaine, heroin, amphetamine and cannabis. A sentencing hearing at Cardiff Crown Court on Monday heard the authorities accessed Encrochat devices used by the dealers and revealed conversations between June 6 and 12, 2020, relating to the conspiracy which lasted 13 months.

While Dhillon and Abdul, 39, led the group, Ryan Hales, 28, played a senior organizational role and was entrusted with the Enchrochat device. Marc Harris, 31, was not a member of the group but was a regular customer and sold cocaine by the kilo with the assistance of his partner Naisha Hembury, 35.

Jay Abdul, 39, of Barry, was a leading figure in the organized crime gang. He was sentenced to 19 years and six months imprisonment
(Image: Tarian)

Neesha Ali, 40, Dhillon’s partner, also played an organizational role and assisted in the collection of debts while Max Smith, 25, and Aysha Ali, 36, acted as couriers. Sentencing, Judge Jeremy Jenkins said: “Each of you contributed to the success and profitability of this enterprise and each of you played essential roles.”

Prosecutor Matthew Cobbe told the court that conversations involving Abdul indicated the group had discussed the supply of up to £5m worth drugs made up of 70kg of cocaine, 30kg of heroin, 96kg of amphetamine and 19kg of cannabis. But the proven financial value of the drugs which had been supplied by the group came to £1.7m.

Police also discovered the group were in possession of a Skorpion 9mm sub machine gun and a semi-automatic 9mm pistol. There was evidence of Dhillon asking an upstream supplier about these weapons, saying: “Any guns with silencers there at the moment?”.

Mr Cobbe said: “The prosecution is not in a position to say what Abdul and the OCG (organized crime gang) intended to do with the semi-automatic pistol, or why it had been placed in the van. However, the use of extreme Violence is regularly encountered with OCGs. Firearms are used for protection against rival gangs or tools of enforcement for debts owed.”

Other enchrochat conversations between the defendants revealed the lucrative nature of the operation, with Abdul describing cocaine as “Like hot cakes, they flew out”. Dhillon also messaged Hales saying “After this corona we should be flying bro”, to which Hales responded: “Yeah man can’t wait for the numbers nice1(sic).”

The drugs were mainly trafficked to south Wales by Aysha Ali who made at least 47 trips from her home in the West Midlands over 11 months. It is believed she was carrying wholesale kilo quantities of class A drugs per trip as a conservative estimate.

On May 5, 2021, the Skorpion gun and a large amount of ammunition were seized from a house of multiple-occupancy in Stacey Road, Splott. The automatic pistol was seized from Heol Barri, Caerphilly on May 14, 2021, when Dhillon and Abdul were arrested Both guns were found to be fully functional and were tested by police. Abdul’s DNA was found on the magazine of the Skorpion and on the trigger of the pistol.

Abdul was also found in possession of a snap bag containing cocaine but upon being arrested, he told police: “That’s the least of my f****** worries”. Both he and Dhillon made no comment in the interview and were released under investigation. Dhillon subsequently went on the run and has yet to be found.

Neesha Ali and Naisha Hembury became involved in the conspiracy following the arrests of Dhillon and Abdul. Neesha Ali chased her partner Dhillon’s customer Harris for money through his partner Hembury and there were messages between the two.

On July 7, 2021, Abdul met Smith at a car garage in Sully Moors Road, Barry, with Abdul collecting a kilo of cocaine from his own stock to be supplied on elsewhere. Abdul’s car was later stopped by armed officers close to Sarn and he was arrested.

On July 12, 2021, Harris and Hembury met with Smith at the Captain’s Wife pub car park in Barry in order to receive a kilo of cocaine. After purchasing the cocaine, Harris was stopped by the police as he tried to leave the car park and he and Hembury were arrested.

Smith was arrested on August 17 when his home was searched by police and mobile phones were seized. On the phone were found text bombs sent by Smith on behalf of the organized crime group for the sale of class A drugs.

Abdul was further arrested on August 19 in relation to the firearms offenses and Neesha Ali, Aysha Ali, Hembury and Hales were arrested on October 12, 2021. When police attended Neesha Ali’s home, one of her children ran out of the house and threw a large blue holdall over a neighbor’s wall and was found to contain £71,392 in cash. Police also found documentation in relation to the cash purchase of a £415k property in Rhoose in Dhillon’s name, made the previous day.

In reference to Abdul’s role in the enterprise, Mr Cobbe referred to a quote from DC Sean Meyrick. The officer said: “Abdul is making huge financial rewards from the sale of cocaine, amphetamine, cannabis and heroin, supplying wholesale quantities onto other significant suppliers. Abdul is a well-respected criminal within the drugs underworld and talks of discussions with international suppliers across Europe. In my experience, this type of criminal connection with suppliers close to the original source does not happen overnight and would have taken a considerable amount of time and business to earn such trust.”

In mitigation, David Elias QC for Abdul said his client was not the leader of the group but played a leading role. He said the defendant was realistic and has come to terms with life behind bars. Adam Sharp, for Hales, said his client was being groomed for a greater role but was a subordinate to Dhillon and Abdul and took responsibility for his actions. Hilary Roberts, for Harris, said his client was motivated by greed for money but employment awaits him upon his release from prison.

Karl Williams, for Smith, said his client had no previous drug related convictions and was addicted to cocaine at the time of the offence. Nick Barraclough, for Aysha Ali, submitted his client could receive a suspended custodial sentence due to her limited role. Hashim Salmann, for Neesha Ali, said his client was at risk of losing her accommodation, family support and future employment if sent to prison and would have an inevitable impact on her children. Richard Ace, for Hembury, said his client was affectively taking messages for her partner Harris and is the primary carer for her child.

Judge Jeremy Jenkins said: “You played for extremely high stakes and were encouraged by considerable profits you thought you could make. Each of you must pay for the consequences of those decisions.”

Detective inspector Gareth Grant, of Tarian, said: “The safeguarding of our communities will always be our priority. Whilst the seizure of the firearms during this investigation is very disturbing I want to reassure people that guns like this are, thankfully, very unusual here in south Wales.

“Such was the weight of evidence against the majority of these defendants they that he had no option but to enter guilty pleas. This is down to the hard work and dedication of my investigation team. The success of this investigation demonstrates that we will relentlessly pursue those involved in large scale criminality to ensure effective justice is sought against such individuals and they are brought to justice.”

Nicola Rees of the CPS said: “The strength of evidence presented by the CPS resulted in guilty pleas from the group. Their activity was on a commercial scale, with wholesale quantities of drugs destined for the streets of south Wales. The group’s attempt to evade the law by using encrypted phones was ultimately unsuccessful.”

How to Drill through Metal – Techniques and Tricks