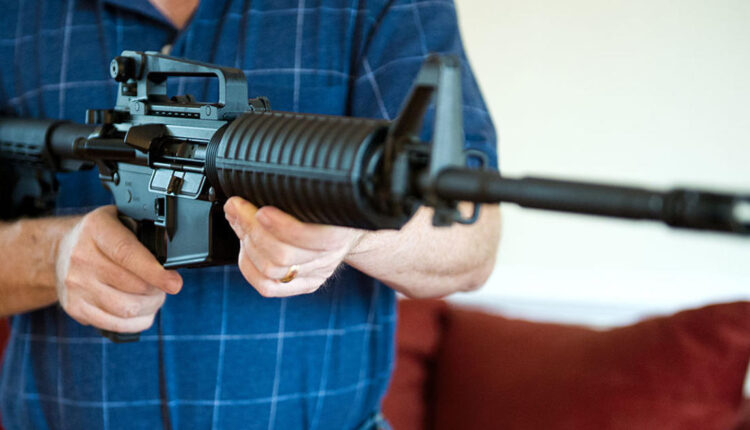 America has grown accustomed to military-style semi-automatic weapons such as the AR-15. It’s not hard to see why: These firearms have been heavily marketed to gun owners. But at the same time, they’re often the weapons of choice for mass murderers.

In an all-too familiar pattern, Omar Mateen, the gunman in the Orlando nightclub massacre, used one of these weapons, Sig Sauer’s MCX (a version of the AR-15 rifle), in his deadly attack on Sunday. The AR-15 has grown so popular that the pro-gun lobby National Rifle Association has termed it “America’s rifle.” The AR-15 and its variants have been used in a number of mass shootings, ranging from the Newtown, Connecticut, elementary school tragedy to the San Bernardino, California, attack in December.

The gun industry has cranked up the consumer marketing behind these weapons during the past 12 years, following the expiration of a ban on them in 2004. Decried by gun-control advocates, the rifles have gained a solid and growing foothold in American homes because they ‘re light, customizable and powerful. While the government doesn’t track how many military-style weapons are in American homes, one industry group estimates that US citizens now own more than 8 million of them.

To understand what that means, consider that this number was estimated at 1.5 million in 1994, according to a Congressional Research Service report from 2012. In two decades, the number of assault-style weapons in private homes have more than quintupled.

“The gun industry, with support from the gun lobby, has focused on the marketing of assault weapons over the past 10 years or so,” said Josh Sugarmann, the founder of the Violence Policy Center, an advocacy group that pushes for stricter gun laws . Despite the US ownership estimates, Sugarmann described the effort as “a cross between criminology and phrenology” because no organization or government agency tracks the figure.

The gun industry has a good reason for pushing sales of assault-style weapons: They tend to be more expensive than handguns, and they can be accessorized and customized with everything from special triggers to pink-tinted camouflage skins. That means bigger sales for gunmakers.

How the AR-15 went from military weapon to civilian gun

On top of that, the industry is dealing with a demographic problem, Sugarman said. Gun owners are most likely to be white men, a group that’s losing ground when it comes to population share. Brookings Institution demographer William Frey noted that as white Americans age, the country is growing more diverse. While 41 percent of whites own guns, only 19 percent of black Americans own firearms, according to the Pew Research Center.

Given the concentration of gun ownership among whites, that means fewer new gun buyers.

As the primary market for guns gets older and shrinks, the share of firearms owners has also been declining for the past several decades. About half of American households owned guns in the 1970s, but that has dropped to about one-third in recent years.

“The traditional gun buyers are white males, and they are aging. They are dying off,” Sugarmann said, adding that the industry is “working to resell to the primary market of white males. That’s where automatic weapons come in.”

Designed first for military use, the type of rifle Mateen used was first tweaked for the civilian market by Colt with its AR-15. According to the NRA, the weapon “has soared in popularity amongst gun owners” because it is “customizable, adaptable, reliable and accurate that can be used in sport shooting, hunting and self-defense situations.”

Instagram pages devoted to AR-15s show the weapons tricked out with colors and patterns, customized with stocks and barrels and, as the NRA put it, “so, SO, SOOOO many accessories.”

While the ranks of gun owners are declining in America, buyers are still snapping up new firearms. Gun owners now have an average of five firearms each. Annual revenue for makers and sellers of guns and ammo total $13.5 billion.

That’s boosting the fortunes of gunmakers. Smith & Wesson (SWHC) and Sturm, Ruger’s (RGR) share performance has far outpaced that of the S&P 500 index during the past five years. The stocks gained in trading on Monday, the first day that the markets were open following the Orlando massacre.

While the gun industry aggressively markets the AR-15 and its variants, it takes issue with the term “assault weapon.” In an email, the National Shooting Sports Foundation said it’s a “political term that has been adopted by the media.” Assault rifles, in its view, are fully automatic weapons used by the military, while the rifles sold to the public are semi-automatic, which requires the trigger to be pulled for each shot.

“First and foremost, our thoughts and prayers are with the loved ones of the victims of the horrific terrorist attack on the nightclub in Orlando,” the NSSF said in a statement. “Out of respect for the families, the Orlando community, the LGBT community as well as the ongoing investigation, we will not participate in any media interviews until more information is known and it would be appropriate to engage in that discussion.”

Whatever you call them, these weapons are capable of inflicting a great deal of damage very quickly. The MCX rifle Mateen used in Orlando has a magazine capacity of 30 rounds and a military-spec trigger. Sig Sauer describes the roughly $1,700 rifle as “built from the ground up to be silenced, light and short” as well as customizable with a number of accessories “for any scenario or environment.”

It’s unlikely that sales of assault-style weapons will decline anytime soon. Sales tend to rise after mass shootings, driven by fear of more attacks and concern that lawmakers will curtail the sale of such weapons. Sig Sauer is one of the biggest firearms makers in the world and has grown quickly. It sales surged by more than 1,400 percent from 2001 to 2013, according to the New Hampshire Business Review.

“The gun lobby very successfully sells fear — fear of criminals, terrorists, and of the federal government, which they say wants to take away guns from law-abiding people,” said Daniel Webster, professor and director of the Johns Hopkins Center for Gun Policy and Research. “Gun companies heavily market increasingly more powerful weapons. So there is constantly something new and more powerful on the market to entice buyers.”