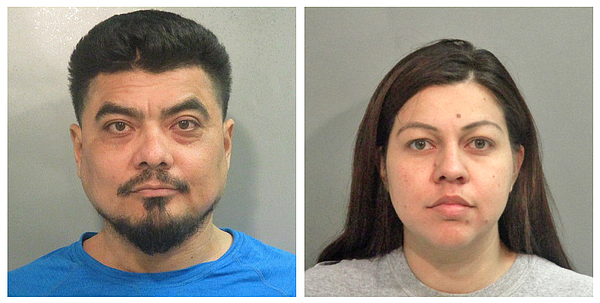 SPRINGDALE — A couple were arrested Monday and three children were placed in the care of the Department of Human Services after investigators with the 4th Drugs Task Force said police.

The arrests were part of an investigation in which police say they made two purchases of methamphetamine totaling about 17.6 grams from Palomino, according to a preliminary report.

Investigators searched the home on Mayes Ave Monday. 1014. Both Palomino and Villegas, along with three children, were inside the home during the search, police said.

Investigators reported finding 3,383 grams of methamphetamine, 66 grams of heroin, 234 grams of oxycodone in 30 mg pills, 857 grams of cocaine and a host of other pills in the home. Officers also found two .22 revolvers, a Ruger .380, a Glock 17, books detailing suspected drug transactions, a glass pipe, digital scales, drug packaging materials, three cell phones and $2,650 in cash, according to the report. Two of the pistols had been reported stolen.

Officers said the three children had access to a large quantity of methamphetamine found in a bottom freezer drawer.

The home is about 280 feet from the Pleasant Street Church of Christ at 1020 S. Pleasant St., according to the report.