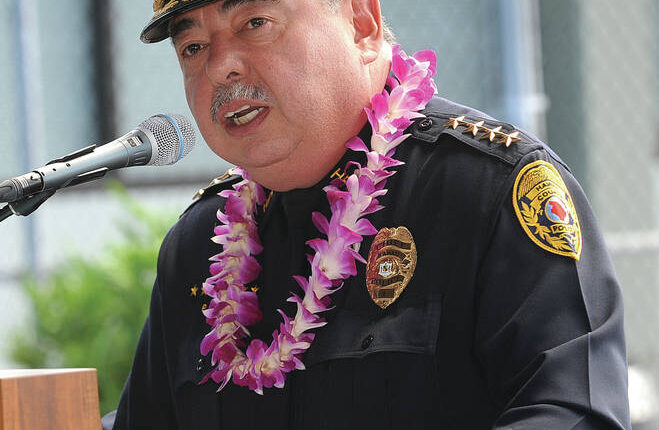 South Hilo patrol officers responded at 7:10 p.m. to a report of a physical domestic worker in an apartment on Mokuhonua Lane in Hilo, Ferreira said. Upon arrival, the four officers tried to contact the residents of the apartment.

A man later identified as 34-year-old Ryan Yukiharu Santos from Hilo spoke to police at a door that led into the house from the garage.

“Santos told the officers that everything was okay and closed the door,” said Ferreira.

The officers then told him to speak and check the welfare of the other family members in the house and went to the front door to contact a female resident who was seen in the living room area. Ferreira said there were four other people in the house at the time, including Santos’ mother, grandfather, aunt and brother. It was Santos’ brother who took the police into the house where their mother was the victim.

“Immediately after contacting the female resident who was later identified as Ryan Santos’ aunt, the suspect Ryan Santos emerged from the kitchen area with a rifle in hand and aimed at the officers, who immediately withdrew from the apartment To seek shelter. “, Said Ferreira during a press conference. “Santos started firing and yelling and cursing at the officers as they withdrew.”

Santos then reportedly left the house and continued to shoot officers on the front balcony.

An officer, a 13-year veteran from the department, returned fire from the cover of an abandoned vehicle on the pavement and hit the suspect several times. The individual officer fired four to five shots, at least one of which hit the suspect.

“After he was shot, Santos was able to retreat into the house, where he succumbed to his injuries,” said Ferreira. An autopsy is scheduled for today.

During the incident, the 91-year-old grandfather appeared to be suffering from cardiac arrest in the house. He was transported by paramedics to Hilo Medical Center, where he was later pronounced dead.

“He is believed to have died of an illness, but an autopsy was ordered to determine the exact cause of death,” Ferreira said.

“Some of the shots fired hit four police vehicles and an adjacent apartment building,” he said, later discovering that the house was unoccupied at the time. “Fortunately, neither the innocent nor the officials were injured.”

Police found four firearms in Santos’ home, including an AR15 “ghost pistol” made from purchased parts and assembled with no serial numbers or identifiers, and reportedly used by Santos during the incident. A repeating rifle and two shotguns were also recovered.

None of the firearms seized belonged to Santos, who Ferreira said was a convicted felon and was prohibited from possessing such weapons.

“The history of the firearms is still under review,” Ferreira said, later confirming that dispatch was told that guns were likely in the house when Santos was unarmed at the time of the report.

Santos was convicted of second degree assault and minor offenses of abuse, drugs and assault. He also has 10 administrative offense arrests on his file, Ferreira said.

According to court records, the 34-year-old was on bail for $ 1,000 at the time of the incident on Sunday. He was due to plead in court on June 23 for a single charge of molesting a family or household member.

Ferreira said footage from cameras worn by officials would likely be released today. In December, the department completed the equipment of its patrol officers with cameras. It was the last in the state to equip its officers with body cameras.

The four officers involved were taken on administrative leave, as is customary in such incidents, the police said.

“The officer involved in the shooting has been put on compulsory leave and the other three officers are waiting to see if they need any advice or a health check from a professional psychologist,” Ferreira said. “It does affect our staffing levels, but we have adequate coverage with officers from different clocks or different clocks.”