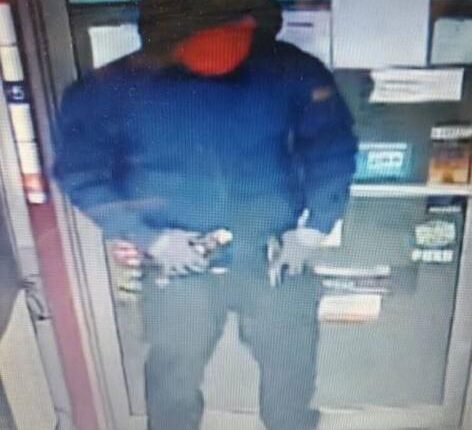 CONSTABLEVILLE – A person was injured in an armed robbery at the Circle K convenience store on Route 26 Friday morning and law enforcement asked for clues.

The employee was shot and taken to St. Elizabeth’s Hospital in Utica, where he was treated for a non-life threatening wound on his leg.

Images captured by surveillance cameras inside show a man masked with an orange or red alligator pulled up as a mask and a blue cloak with a black hood that partially covers his face. He wore what appeared to be blue jeans, said Mr. Amelio, and had a small semi-automatic pistol in his hand.

“We are still in the early stages of the investigation,” he said, “but we will investigate any clue, no matter how little.”

How much money was stolen is still unclear. The clerk will be interviewed later.

The local sheriff’s office is supported by state police, and the Constableville Fire Hall has been set up as the command post for the investigation.

Police are asking the public for help in identifying the man in the pictures and for more information about the robbery.

100 years in the past: James Ballard of Winchester surprises Bloomington relatives | Briefs