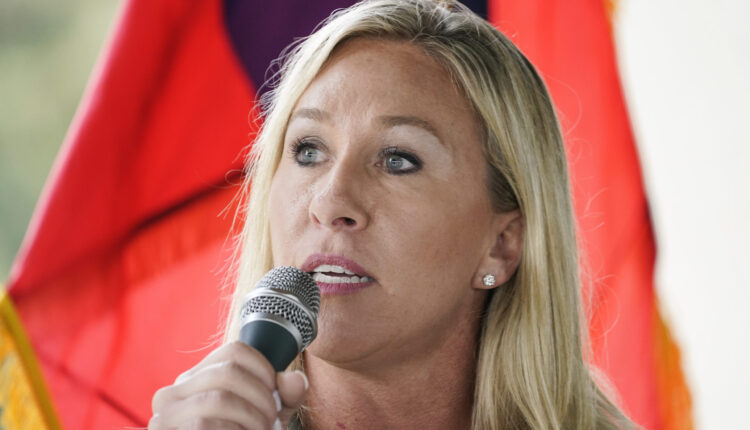 The US House of Representatives recently passed the Equality Act, which adds sexual orientation and gender identity to the 1964 Civil Rights Act and extends equal protection against discrimination. Laws like these will always lead to disagreements and disputes as passionate and well-meaning people on both sides of the subject fight for what they see fit.

This is a normal part of the legislative process. Unfortunately, two representatives, one a Democrat and one a Republican, spat childishly at the bill, which did nothing to change the outcome, but both tarnished their reputations.

One of these women is trying to make herself the face of the gun rights movement in Congress, and that won’t be good for the right to keep and carry guns in the long run.

Thought we’d put ours up so she could look at them every time she opened her door 😉🇺🇸 https://t.co/7joKpTh6Dc pic.twitter.com/aBGRSiIF6X

After Georgia Representative Marjorie Taylor Greene heard she was speaking out against the Equality Act, Illinois Representative Marie Newman, whose office is across from Greene, hoisted a transgender flag “for them to check out.” Can see when she opens the door. ”The intent here was obviously to be antagonistic. In response, Greene posted a sign that read “There Are Two Genders” on the wall, apparently to return to Newman. So far, however childish and ineffective it may have been.

As the feud progressed, Newman spoke out in favor of the bill during the debate and posted her comments on a video on Twitter. In a response, Greene Newman’s daughter mentioned:

As mothers, we all love and support our children.

But your birth son does NOT belong in my daughters’ bathrooms, locker rooms, and sports teams. https://t.co/ex0LXGHAew

I know, I know. Some of you will say that she is only telling the truth, but let’s be real about this. While no child of the Rep is likely to end up in the same bathroom, locker room, or sports team, dragging children into an argument helps neither side of the argument.

We need different opinions and an open debate in society. People should be able to speak their minds even if it is disturbing to others. No matter what the snowflakes claim, words are indeed not violence. Those who claim they are just closing opposing views and wanting to silence them.

But how we do it is also important. Winning a stupid internet piss contest may seem cool, but it’s not good if winning this fight costs you the war.

Personal assaults and idiotic tiffs in the halls of Congress are not helping and can only hurt the Greene cause. Much of the public, many of them Republicans and independents, is disgusted to see such immature and ugly personal attacks. Instead of seeing a Christian stand up for what she believes in, they see childishness and hatred. You see it that way, not because of what was said, but how it was said.

To be fair, Marjorie Taylor Greene has become a punching bag for the left media. While Joe Biden openly makes racist comments, he is given a passport. People like Greene have every word analyzed, analyzed and presented in the worst possible light.

This is the media world in which those who have the right to be centered act. It’s definitely not a fair game. That is, Greene knows that. She knows that things she says will be used against her, and yet she is not careful that her behavior does not jeopardize the mission. She lets the enemy choose the battlefield and then goes straight to her mines.

In a new gun giveaway, @mtgreenee says, “I’m giving away the Q honey badger because it’s the weapon in the crosshairs of gun grabbers across America.”

The problem for the gun rights movement is that someone like them, whom many of us agree with, becomes one of our spokesmen. Instead of being represented by someone who plays things smart, focuses on the essentials and makes sure things get done, we have a modern female Don Quixote tipping over the LGBT windmill.

The next time we tell someone that we support gun rights because it is a human right and protects human dignity from the devastation of tyranny and criminal attack, our opponents will bring up Rep. Greene. They will tell us that she spoke against the rights of a child and that she is an immature person who may not be trusted with a weapon. They tell us about their belief in conspiracy theories with Q Anon, Jewish space lasers that set off forest fires, September 11th as an inside job and staged school shootings.

Are all of these criticisms fair and contextual? No. Will a significant part of the public eat them all up? Absolutely.

It is very unlikely that Greene will stop letting the Democrats provoke him to do stupid things. Therefore we have to distance ourselves from it for our future success.

Instead of supporting people who are unable to think strategically, we should point out how diverse the gun rights movement is. It is, in fact, more diverse than the Democratic Party. Sure, we have many traditional socially conservative and devout right-wing Christians, but we also have groups like the Latino Rifle Association, Black Guns Matter, Armed Equality, Pink Pistols, Gun Conservation Jews, and even the Socialist Rifle Association. There are lots others across the ideological spectrum.

With all of the new gun owners who armed themselves in the past year, including many independents and even Democrats from blue states, we cannot afford to turn the gun rights movement into a fringe right-wing movement. We must all welcome and unite behind our passion for gun rights protection, even if we do not agree on much else.

If we don’t, expect the Democrats to form their own coalition with these new gun owners and expect “common sense gun reforms” which would in fact pave the way for eventual seizure.

Is it worth risking this?