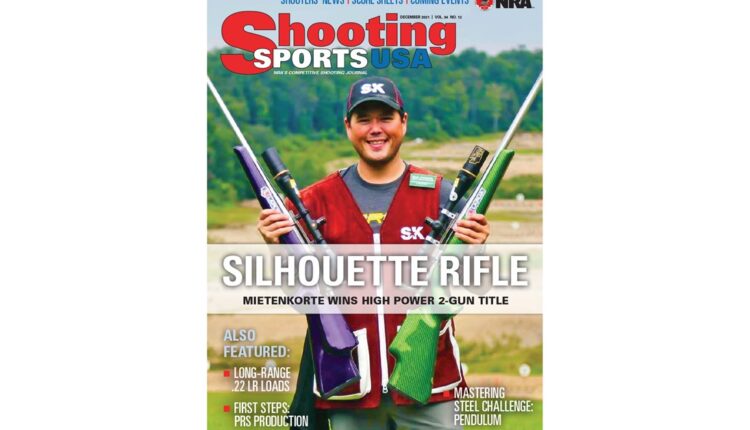 I would like to begin this month’s letter by thanking you, the reader. Whether you’ve read some of the articles published on SSUSA.org or are a subscriber who receives the digital magazine each month, every interaction is appreciated. Like all NRA publications, the site has a particularly robust comments section, and I encourage everyone to take advantage of it.

Looking back, 2021 was one of the most successful years for competition shooting and our talented writing team has covered as much of the action as possible. The summer months in particular were dominated by two stories: NRA and the debut of their much-vaunted national games at Camp Atterbury, and the Tokyo Olympics, where US shooters won a total of six medals, including three golds, after a year’s delay. (Read our coverage of the Tokyo Olympics in the October issue.)

And there’s always news coming in. As of this writing, Team Ruger’s Doug Koenig has won the Precision Rifle Series Production title at the 2021 season finale at the NRA Whittington Center. Perhaps better known for his 19 Bianchi Cup Action Pistol victories, Koenig has also been a top PRS production shooter since he started the sport about five years ago. Author Josh Honeycutt recently spoke with Koenig, who shared his tips for success in the PRS production department (page 24).

Silhouette is one of the backbones of NRA competitive shooting and this year’s Rifle Nationals, held at the Ridgway Rifle Club in Ridgway, Pennsylvania, did not disappoint. One shooter who excelled this year is Team SK’s Erich Mietenkorte, who conducted marksmanship training to win the 2021 NRA Silhouette High Power 2-Gun title, a sum of standard and Jager rifle results. Mietenkorte graces the December cover of the digital magazine while holding both guns. Don’t miss our coverage of the 2021 NRA Silhouette Rifle Nationals (Page 30).

Handloading .22 Long Rifle cartridges is a topic Field Editor Art Merrill has covered in the past, and this month’s Product Focus covers the development of long-range rimfire loads. The popularity of precision rimfire competition has grown tremendously over the past five years and Cutting Edge Bullets now offers turned full copper .22 LR caliber handloader bullets (page 12). This item is a must-have for marksman and handloaders looking for an advantage in long-range competition with the .22 LR.

Speaking of ammo, author Brad Miller examines the .357 SIG and .357 Magnum cartridges to see which performs better (page 34). For his article, Miller tested the two powerful medium handgun calibers with selected semi-automatic pistols and revolvers, and you will be surprised by his results.

Also featured this month is Field Editor Chris Christian’s latest article on completing the stages of the Steel Challenge. Previously he covered the Five To Go, Speed ​​Option, Smoke & Hope, Roundabout, Showdown and Accelerator stages. This month he’s sharing his tips for getting on the pendulum stage (page 40). Next month’s issue covers the Outer Frontiers phase.

In closing, I would like to thank all of our contributors and staff for another successful year, and once again thank the readership for their continued support and for reading and commenting on our articles. From all of us here at shooting sport USA, the warmest wishes for a Merry Christmas and a wonderful New Year!

Are you a subscriber?

Not getting the monthly digital magazine announcement in your inbox? become a subscriber. Not only is it completely free, it only takes a minute to sign up and it guarantees that you won’t miss a single issue of the NRA’s competitive shooting journal. Subscribe here.