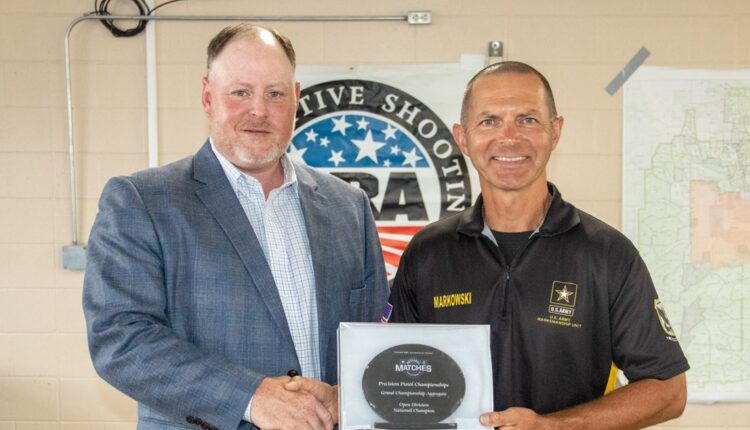 With a score of 2645-139X, SFC Greg Markowski of the US Army Marksmanship Unit is the NRA Precision Pistol National Champion 2021. The game took place July 20-25 at Camp Atterbury near Edinburgh, Ind.

Markowski in the line of fire during the 2021 Mayleigh Cup game at Camp Atterbury.

Third place went to Markowski’s AMU teammate SSG Ryan Franks, who finished the game with a score of 2623-119X.

Plus, Markowski was the high-service shooter. He also won the championship in the .22 caliber with a score of 889-55X.

The high woman was the Army National Guard Pistol Team’s 2LT Lisa J. Emmert master class shooter who finished the match with a score of 2619-111X.

The 2021 national metallic champion was SFC David A. Paquette of the Army National Guard with a score of 2555-77X. Paquette is classified as a master. Runner-up was Sharpshooter John Dervis of Sheridan, Illinois, who finished with 2402-47X.

High Master Steven D. Pardieck of Indianapolis, Indiana was the High Police winner with a score of 2570-97X.

For High Senior, the win went to Franklin Dessuit of Valparaiso, Indiana, with a score of 2593-101X. Dessuit is a master class bullseye pistol shooter.

The special award is rounded off by the High Grand Senior, who went to Ron Steinbrecher from Wyndmoor, Pennsylvania with 2549-85X. Steinbrecher is classified as a Grand Master.

Conditions for the game were common for this part of Indiana during the summer – hot and humid, with temperatures in the 80s and 90s. Despite the muggy weather, the wind at Camp Atterbury is generally not too brutal – at least for the precision pistol shooters. In addition, the new 100-point area provided some protection from the elements for the competitors on the line of fire as well as for spectators, referees and other match officials.

Shooters on the line of fire for team play in Camp Atterbury’s new 100-point realm.

Additionally, the 2021 NRA Precision Pistol Nationals were presided over for the first time by longtime NRA referee Kenn Boyd as game director. Boyd served for many years as a match official at Camp Perry and the Bianchi Cup Action Pistol Championship. His experience made him ideal for the new role. In the face of a difficult situation at a new venue for the pistol championships at Camp Atterbury, Boyd approached the task with enthusiasm and aplomb.

“Kenn Boyd is completely selfless and has earned a reputation every year for helping the NRA,” said Cole McCulloch, director of the NRA Competitive Shooting Division. “That year, Kenn ran a great crew as Match Director at a new facility and gave us a fantastic match under the circumstances.”

A detailed match report will be published in a future issue of the digital magazine. Subscribe to the free Insider newsletter for the latest updates.