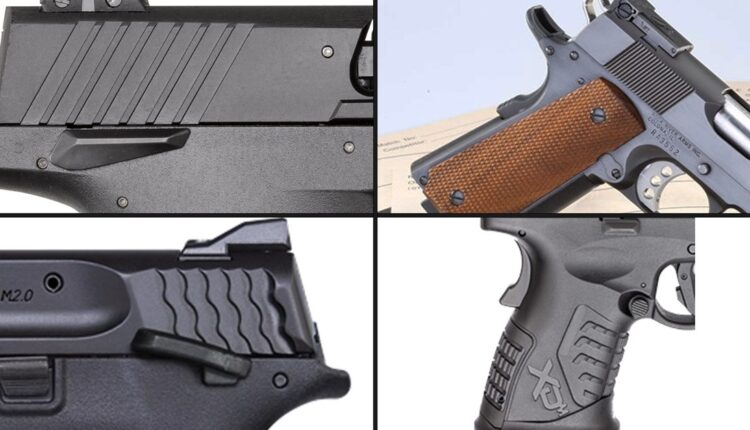 Semi-automatic gun safety systems can take on a dizzying variety. The best known are probably the swiveling thumb levers on the frame or slide. Sometimes these are only on the left; however, in many newer designs, they are double-sided for ambidextrous use. While many thumb locks pivot down to release, some work in the opposite direction. Such frame-mounted fuses typically block the firing pin, while those that are sled-mounted usually prevent the hammer from touching the firing pin.

The manual safety on this Taurus TX22 Competition is in the firing position.

Another type of safety system found on some traditional double-action pistols is the hammer drop safety system, also known as a decocker. When it engages, the hammer falls into its lowered position without damage. With any pistol of this type, the hammer remains in the cocked position when you fire a shot or simply pull the slide to insert a cartridge into the chamber. Since such pistols are not designed to be safely carried with a cartridge in the chamber and the back of the hammer, the hammer must be lowered before the pistol is holstered, placed in a pistol box, etc. The relaxation mechanism does this safely. Semi-automatic pistols with only double action can have a thumb safety device or, alternatively, no active safety mechanism at all.

All semi-automatic pistols usually have one or more passive safety systems, such as unless the trigger is pressed.