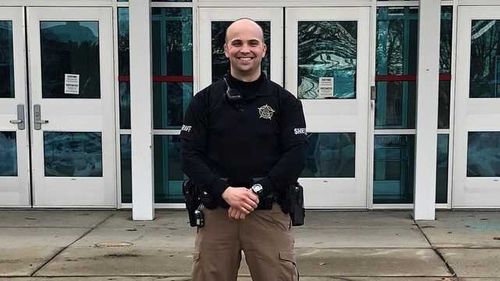 FREDERICK, Maryland (WBAL) – A Frederick County school clerk exposed drugs, a pellet gun and real ammunition when investigating a man who fell asleep in a car on campus, the sheriff’s office said.

The sheriff’s office said school staff alerted the deputy on Tuesday afternoon to a moving car that stopped in front of the school.

The sheriff’s office said Turner found a man who slept in the front seat. The MP knocked on the door and the man woke up and opened his window. At the time, authorities said the MP spotted a heavy marijuana order from the car.

The deputy searched the car and found over 26 grams of marijuana, an Umarex XBG pellet gun, an empty 16-round 9mm Smith and Wesson pistol magazine, and a box of NovX Engagement Extreme Self-Defense 9mm Luger + P 65 grain ammunition with 17 rounds. The sheriff’s office said the pellet pistol looked a lot like a semi-automatic pistol.

The sheriff’s office said the suspect was a known gang member and convicted criminal who was banned from possessing ammunition. Fees are still pending.

“This is a great example of how the SRO program works for the safety of all,” said Lt. Jason Deater of the Frederick County Sheriff’s Office in a statement. “Our deputy was already at school and quickly coped with the situation. The students and staff of the GTJHS were brought to safety by his quick measures and show the importance of this program. “

Please note: this content is subject to a strict local market embargo. If you have the same market as the author of this article, then you are not allowed to use it on any platform.