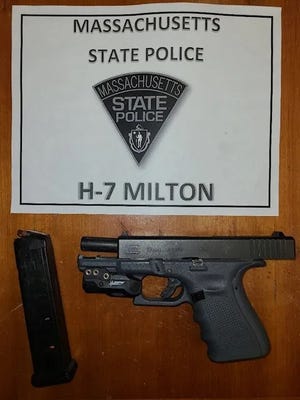 33-year-old Jason Randall of Randolph was stopped on Route 24 in Stoughton after his expired black Cadillac operated “erratically” and turned off lane lines, police said.

Randall’s license had also been suspended and the police requested that his car be towed.

During a search, police found a Glock 19 gun that was fully loaded with a 20-round magazine. The gun has been reported stolen in South Carolina and Randall is not licensed to use it, police said.

Randall was arrested and marked for possession of a firearm, possession of a large capacity gun, violating a firearm with a previous violent or drug crime, obtaining stolen property, driving an unauthorized car, driving without a license, and one Accused of lane violation.

Three hours later, another soldier said he had run over a blue Mazda “with the headlights off and the windows thick” in Dorchester. The driver and his passenger began to act erratically after being run over, the soldier said.

After the soldier noticed scissors near the gears of the car, he called for assistance and the two men were removed from the car and searched. During the search, police found 24 white pills believed to be oxycodone, two bags of marijuana, cash “consistent with the sale of illegal narcotics” and a 9mm Smith and Wesson pistol that came with eight cartridges was loaded.

Malik Muhammad, 33, and Anthony Fernandes, 32, from Dorchester were both arrested.

Many thanks to our subscribers who make this reporting possible. If you’re not a subscriber, support a local journalism with a Patriot Ledger subscription.