Subsonic Ammo for Self Defense and Concealed Carry

In the last few years, we have seen a resurgence of suppressed firearms to reduce gunshot sounds, even though suppressors (legal in about 39 states at this time) do not “silence” or eliminate the sound of firing. To call them “Silencers” is probably a misnomer. Their primary role is to reduce loud sounds and to reduce muzzle blast to more bearable levels, usually about 20 to 30 decibels (dB) or so of noise reduction, with a suppressor. However, for even greater reduced sounds, shooters can use both a suppressor and subsonic ammo. In addition to subsonic ammo to help reduce hearing loss, there are other strategies to prevent hearing loss when shooting, and I will give you some in this article.

Why use subsonic ammo?

Subsonic ammo is primarily used for suppressed home defense guns, given their ability to reduce loud sounds and to muffle escaping gases inside close quarters. It is also used to help lessen the negative effects on hearing in general for self defenders and other personal protection considerations. There are several reasons subsonic ammo is growing in popularity, and reduced noise is only one of them. Shooters have discovered improved accuracy with loads that do not break the sound barrier, reduced recoil, and faster follow-up shots.

What is subsonic ammo and its general velocity?

Any ammunition that achieves less than supersonic velocity is considered subsonic ammo. It is generally accepted that “subsonic” ammo has a velocity of 1,126 ft per second at sea level, the speed of sound. Anything faster than that is considered supersonic ammo. Subsonic speed, however, is not constant and environmental factors affect velocity, particularly temperature. Usually faster in hot weather than in cold.

According to research by the National Institutes of Health in 2017 about noise-induced hearing loss from firearms, the “majority of recreational firearms generate between 150 and 165 decibels of peak sound pressure levels.” And these “high-intensity impulse sounds will permanently damage delicate cochlear structures” and put shooters “at a higher risk of bilateral, high-frequency, noise-induced hearing loss.” The type of gun noise (continuous, impulse, and blast) has a significant effect.

It is important to understand how subsonic ammo relates to hearing loss and if it can be an acceptable strategy to help prevent hearing loss. Here are some general Hearing-Loss Strategies offered by the National Institutes of Health.

The answer to the above question is not necessary, and it depends. Does that mean it’s quieter? Not necessarily. Maybe somewhat quieter, but not by much… again, it depends. For example, standard-pressure .45 ACP and heavy-for-caliber 9mm ammunition still produce around 150 to 160 dB of noise when fired. The type and features of the gun it is fired through also have key effects.

Even in some situations, if the shooter is not wearing hearing protection, firing subsonic rounds or any rounds may produce instant and irreversible hearing loss. The same goes for rifle ammunition and shotgun ammunition. However, low-velocity subsonic loads produce less noise due to the projectile being far slower than heavy-for-caliber loads. IT DEPENDS. Depending on the loading and the gun used for the ammunition, the duration of noise exposure, the number of rounds fired, the noise level produced by the gunshot might be as low as 130 dB or lower. It depends a lot on the loading, the duration of the noise, and what gun it is fired through. 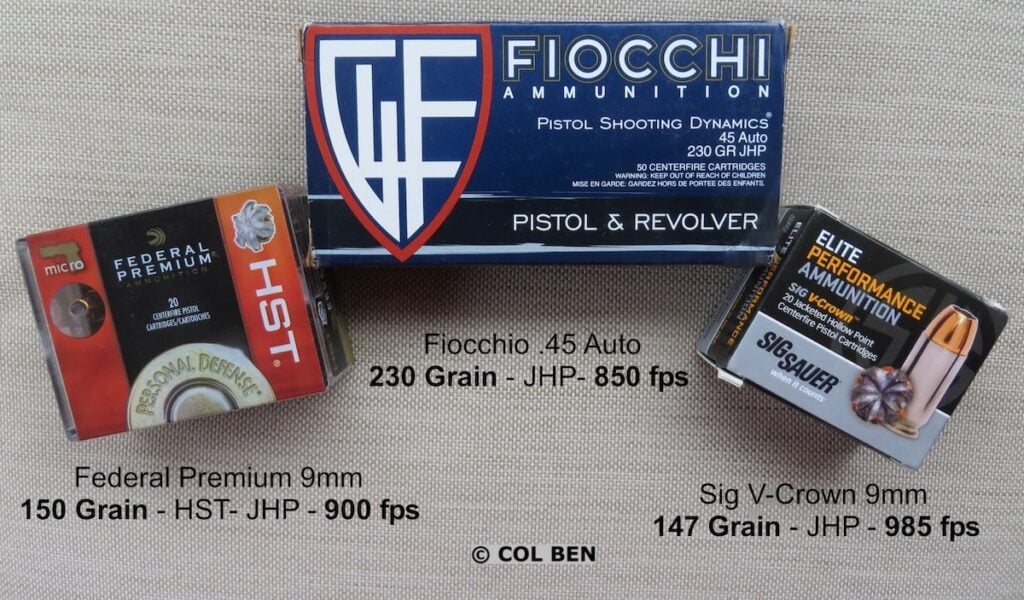 Most 147 grain 9mm rounds are subsonic and thus have heavier weights and are slower velocity rounds, usually less than 1,000 feet per second (fps.) There are several types of 147 grain defensive rounds. For example, Speer Lawman 147 grain and American Eagle 147 grain, both Total Metal Jacket rounds. And the Sig Sauer V-Crown Jacketed Hollow Point 147 grain rounds with 985 fps. The subsonic SuperVel Hush Puppy 147 grain Full Metal Jacket 9mm (made for use with suppressors) is loaded to 900 fps velocity, which is around 50 to 100 fps slower than typical 147 grain ammunition. In comparison, Hush Puppy 115 grain Full Metal Jacket 9mm ammunition is loaded to 1000 fps, about 150 fps slower than typical 115 grain ammunition. Federal HST 9mm JHP for short-barreled carry guns has 150 grain ammo and is also loaded to 900 fps. There are some subsonic 9mm and .45 Auto rounds with heavier weights or grains and slower velocities than the 147 grain. For example, the quieter Fiocchi 9mm 158 grain FMJ and the Fiocchi .45 Auto 230 grain JHP with a velocity of 850 fps. Eley Group makes .22LR reduced recoil ammo with a heavier 42 grain bullet with high muzzle energy and a muzzle velocity of 1,040 fps.

Two concerns when shooting subsonic ammo in pistols, especially in self-defense encounters, are will it feed well and cycle the slide in your particular handgun. Of course, this can be a critical life or death situation. Some friend expressed to me that he had trouble with his 147-grain rounds and their bullet shape feeding well in his pistol, with frequent jams. He said he would NOT recommend subsonic ammo for self-defense—just one opinion.

On the other hand, another friend said that he has never had trouble regularly feeding and cycling any subsonic rounds into his various concealed carry pistols, especially longer barrels and full-size guns. He said he WOULD recommend full-power subsonic rounds because they are somewhat quieter. Most standard-pressure rounds already exist as subsonic rounds. He believes there is a little more penetration with subsonic slower and heavier rounds. Also, he said he had slightly better accuracy with it. My friend said it depends on the gun, its quality features, and the specific ammo used for the penetration and accuracy achieved. Again, it depends, so do not take the chance and practice often and extensively with all the types of subsonic ammo you use for all your various self-defense guns for your personal protection.

Does subsonic ammo have sufficient energy and velocity for self-defense?

A slower subsonic bullet has exponentially less foot-pounds of energy than a faster one of the same weight. I am aware from my Special Operations duties that some military commandos have used quieter subsonic rounds for certain missions over the years and had sufficient energy and accuracy to get the job done. It provided superior covert and stealth opportunities. And the current FBI load is a 147-grain subsonic round that expands very well and even penetrates sturdy barriers, like automobile windshields. Again, be careful. It depends… you want to practice to ensure your particular subsonic rounds will cycle the slide of your particular semi-auto pistol and handle it to get the job done. Generally, no modifications should be required to feed 147-grain subsonic full-power rounds and to cycle the slide, in my opinion. While most shooters do not want to use low-penetration ammo for self-defense, there are a few +P subsonic rounds to consider. Generally, there will be approximately the same penetration achieved as supersonic rounds in pistols, but not for rifles. Keep in mind that there is a difference between subsonic rounds used for rifles and those used for pistols. More diameter mass will offset less velocity, so some military and law enforcement units, and some hunters, prefer subsonic ammo with long, large-diameter bullets like the .300 AAC Blackout round and longer barrels with fast 1:7 twist rates in rifles for stabilization.

Without a doubt, subsonic ammo eliminates the downrange sonic “crack” or boom when breaking the sound barrier. It does reduce the bang at the muzzle somewhat because of its lower velocity. So it does reduce the noise.

Keep in mind that when a supersonic bullet slows down, has less velocity in flight, and becomes a subsonic projectile, it destabilizes, loses some of its trajectory, and may reduce the accuracy. Conversely, a subsonic round does not suffer from this problem. It is always subsonic in nature and is more stable in flight, and does not experience this major transition. Subsonic rounds are generally more accurate to a small degree at shorter distances since they do not experience instability from the transition, like with supersonic rounds. It does depend on other factors, like the gun’s features, the firearm’s intended purpose, accuracy expectations for the gun’s use, type of bullet and ammo used, recoil, etc.

Shooters of .22 LR guns and smallbore competition shooters know that subsonic .22 LRs are more accurate than supersonic .22s because they have about 35 to 40% less wind deflection from more air resistance, with much less noise. Shooting subsonic rounds in a pump or bolt-action rifle usually does not present problems.

Still, another advantage of subsonic ammo is due to their lower velocity. They generate reduced recoil and allow shooters to get back on target quicker.

For even greater reduced sounds, shooters can use both a suppressor and subsonic ammo. Subsonic ammo is one strategy to prevent hearing loss when shooting, but there are others to consider as included in this article. Reducing noise may not be the only benefit desired or even the main one for the shooter.

Some shooters have discovered improved accuracy with subsonic loads that do not break the sound barrier, have reduced recoil, and that allow faster follow-up shots. But several factors affect this.

Subsonic ammo is any ammunition that achieves less than supersonic velocity, which is generally accepted to be a velocity of 1,126 ft per second at sea level, the speed of sound. Anything faster than that is considered supersonic ammo.

Subsonic ammo is not necessarily quieter, with a lower decibel noise level than supersonic ammo. It depends on several factors. The type and features of the gun it is fired through and the type and characteristics of ammo used have key effects. There are low-velocity subsonic loads that produce less noise due to the projectile being far slower than heavy-for-caliber loads. It depends on the loading and the gun used for the ammunition, the duration of noise exposure, the number of rounds fired, and the noise level produced by the gunshot might even be as low as 130 dB or lower.

Most 147 grain 9mm rounds are subsonic and thus have heavier weights and are slower velocity rounds. There are several types of 147 grain defensive rounds. Some have expressed concerns about using subsonic ammo in self-defense life-or-death encounters, like will it feed well and cycle the slide in a particular handgun. Some wholeheartedly recommend it, especially for pistols with longer barrels and full-size guns. Most standard-pressure rounds already exist as subsonic rounds, and some believe there is a little more penetration and accuracy with subsonic slower and heavier rounds. But, practice often and extensively with all the types of subsonic ammo you use for your various self-defense guns…. and it does reduce the downrange sonic “crack” and the gun’s recoil somewhat.

Practice and carefully decide about subsonic ammo for self-defense for yourself, my friends!

* This personal opinion article is meant for general information & educational purposes only, and the author strongly recommends that you seek counsel from an attorney for legal advice and your own personal certified weapons trainer for proper guidance about shooting & using YOUR firearms, self-defense, and concealed carry. It should not be relied upon as accurate for all shooters & the author assumes no responsibility for anyone’s use of the information and shall not be liable for any improper or incorrect use of the information or any damages or injuries incurred whatsoever.

© 2021 Col Benjamin Findley. All Rights Reserved. This article may not be reprinted or reproduced in whole or in part by mechanical means, photocopying, electronic reproduction, scanning, or any other means without prior written permission. For copyright information, contact Col Ben Findley at [email protected]

Shooting Illustrated | Why the Lever Gun is Great for Self Defense

Home Defense Weapons: How To Choose The Right One |